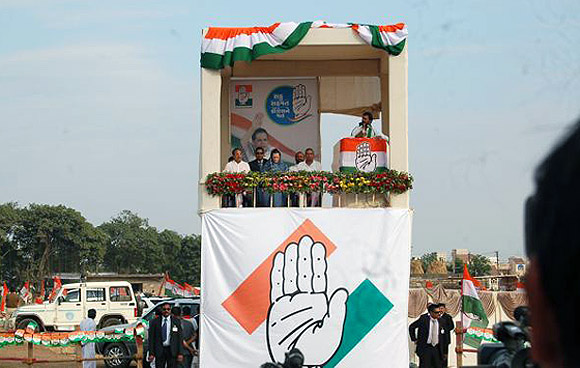 While a massive crowd gathered of 25,000 thronged Congress President Sonia Gandhi's rally in Keshod, only 3,000 showed up when the Gujarat chief minister campaigned in the Junagadh town. Prasanna D Zore reports

The election campaign war is hotting up in Gujarat as the assembly polls (first phase on December 13) inch closer. Congress President Sonia Gandhi sounded the war bugle against Gujarat Chief Minister Narendra Modi when she first addressed a huge rally in south Gujarat -- in Mandvi, Surat districts -- and later at Keshod in Saurashtra's Junagadh district.

Though one got an impression that the Congress has picked up Modi's challenge by inviting the party president to address two rallies, it was interesting to hear Gandhi take on Modi's 11-year 'misrule' without naming him.

Speaking at Keshod, Gandhi attacked Modi for ignoring Saurashtra and its water woes. "The people of Saurashtra must give such rulers a fitting reply," Gandhi said pointing towards Modi's promises to fill dams in the region with Narmada's waters. "It is sad to see farmers committing suicides in this region," she said to a partisan, vociferous crowd. 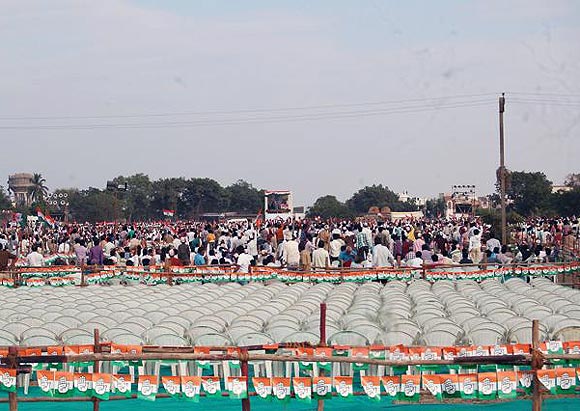 "Where are all the promised irrigation projects that the Gujarat government had promised to the people of Saurashtra," Gandhi asked of the people whose main concern is lack of adequate water for farming.

Drawing people's attention towards Modi government's false promises, she said, "The farmers of Saurashtra are the biggest victims of the government's irrigation policies."

Gandhi's body language and speech was aggressive yet toned down, as she addressed a 20,000 to 25,000 strong crowd that comprised Congress's traditional voters --the Harijans, kshatriyas, adivasis and Muslims.

In a stark contrast, and what some in the crowd believe is Modi's waning influence on Gujarati voters, only 3,000 people attended Modi's rally in Keshod on December 6. 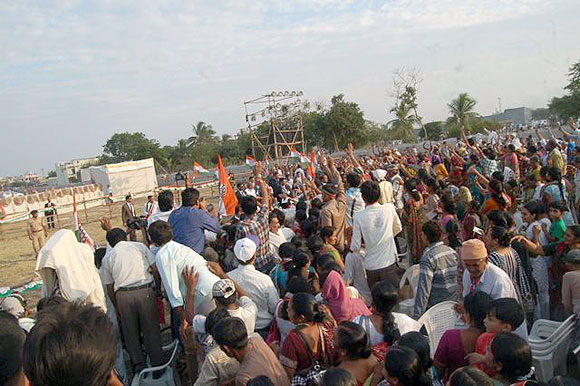 Gandhi, in her 20-minute speech, that was laced with pointed barbs against Gujarat government's anti-people policies, stuck a chord with all sections of the crowd -- the youth, the farmers, women, the Harijans, the Muslims.

"10 lakh youths in the state are unemployed," she said looking at a large section of youth, "and the Gujarat government is doing nothing but offering them one festival after another."

The dig was at Narendra Modi's media blitzkreig showcasing his government's pro-development policies.

"The Gujarat government's pro-people policies are hollow and false," she said. "This government's policies only benefit the rich and not ordinary citizens."

"People of Gujarat have now woken up to the cheating and looting the government indulged in your name," she said to the crowd that came from several adjoining villages.

"You must teach people who make empty promises a good lesson in this election," Gandhi said. "I am sure you are seeing Saurashtra's backwardness in terms of inadequate irrigation facilities."