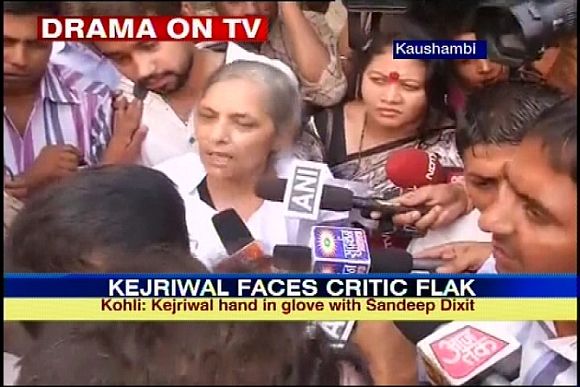 Image: TV grab of the incident

High drama was witnessed at Arvind Kejriwal's press meet on Sunday when he was angrily confronted by a woman claiming to be a former IAC volunteer and sharply questioned on his conduct.

The press conference was convened by Kejriwal to condemn the action against his supporters who clashed with police when they were prevented from barging into the residence of Haryana Chief Minister Bhupinder Singh Hooda in New Delhi's Pandit Pant Marg to protest on Robert Vadra-DLF issue.

As he fielded questions and paraded some of the injured persons before the media in Ghaziabad after bringing them from a Delhi hospital, some protesters accompanying the elderly woman Annie Kohli shouted slogans and levelled allegations against Kejriwal and Manish Sisodia, saying they were using the anti-corruption movement for their own gains.

When the sloganeering continued, Kejriwal said he will talk to the detractors and understand what their grievances were.

'You speak with lots of affection, but you are doing politics' 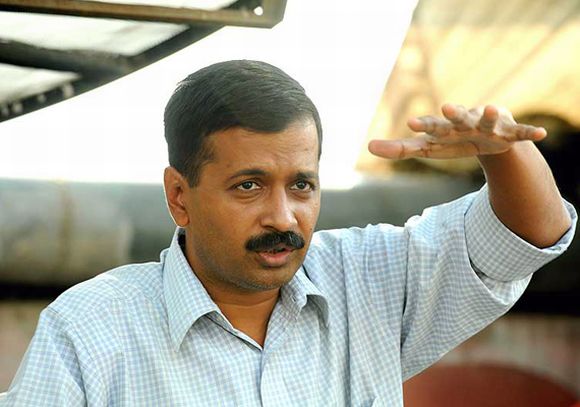 Soon after Kejriwal wound up the press meet, Kohli, who is based in Mumbai and who led the protesters, and others tried to enter the premises but were prevented by police.

Kejriwal then came out and listened to Kohli who asked him whether he was a revolutionary or a Gandhian or a politician.

"You speak with lots of affection, but you are doing politics. You are using this as a ladder for your politics. Revolutionaries never ran away from sufferings. But for you, when the time came, you ran away," Kohli, whom Kejriwal said he does not know, alleged.

"You were on protest with disabled people on Salman Khurshid case. First you said, you will sit there till you get result. But after four days, you left the place saying now you will go to Farukkhabad. You have support in Delhi. You want to become a leader," she said.

When Kejriwal intervened saying she can sit in Delhi when he goes to Farukkhabad, she said she is from Mumbai.

'Every agitation has its own strategy' 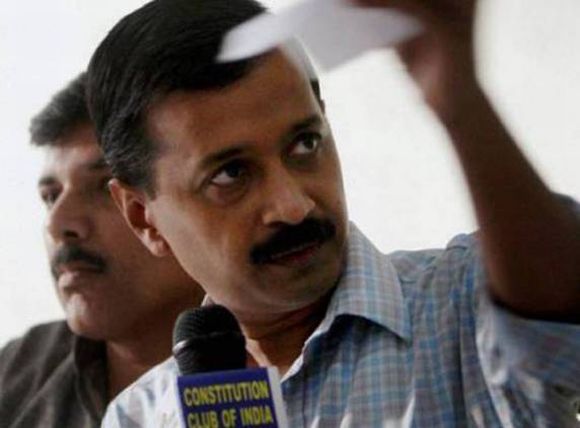 Kohli also distributed a pamphlet in which she raised a question what his ideology was. "The independence struggle has two streams of protests -- one the revolutionary path of Bhagat Singh and another that of Mahatma Gandhi. Which one do you follow? Once you answer this, I will raise another nine questions," she said in the pamphlet.

A youth, who claims to be against the movement taking a political plunge, alleged Kejriwal's intentions were not right and that he is a friend of Congress MP Sandeep Dikshit.

Kohli alleged that she had tried to meet Kejriwal at airport recently but his associates prevented her from meeting him and pushed her.

She also levelled allegations against another IAC activist Mayank Gandhi.

When asked about Kohli, Kejriwal said, "I don't know her. No questions have been raised by her. What kind of questions she is raising? Every agitation has its own strategy."

Earlier in the day, scores of India Against Corruption (IAC) activists clashed with police who used watercanons and force to disperse them while trying to barge into Haryana Chief Minister Bhupinder Hooda's residence in Delhi.

Condemning the police action, Kejriwal said his supporters from Haryana were on a peaceful demonstration to protest alleged efforts to save Vadra, whom they alleged was aided by Hooda in favouring the realty major.