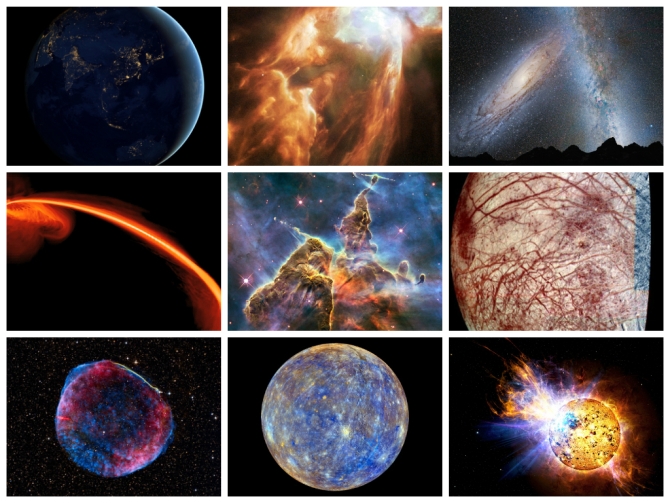 Take a look at these absolutely superb pictures from space, as seen by NASA. 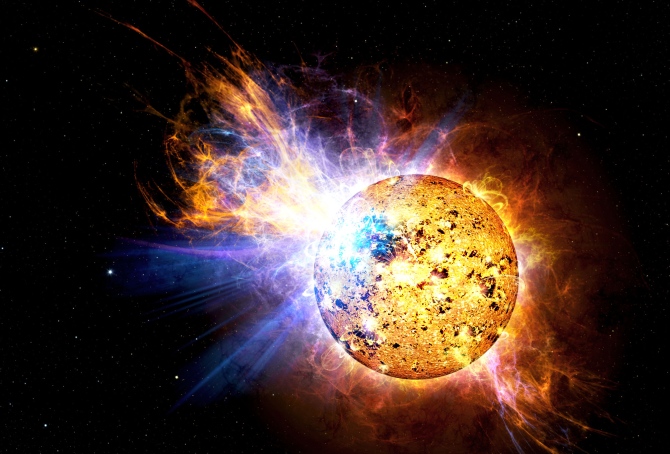 An artist depicts the incredibly powerful flare that erupted from the red dwarf star EV Lacertae. 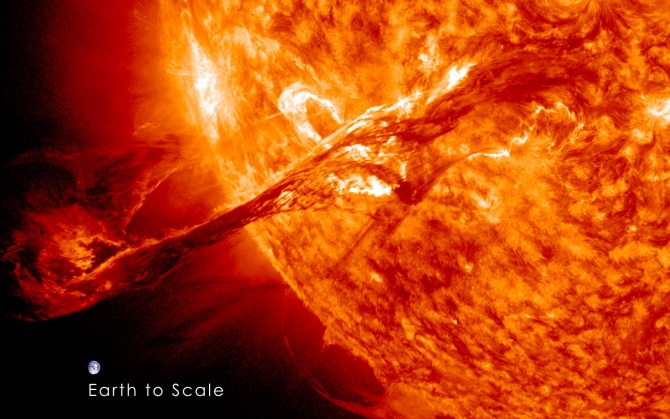 On August 31, 2012 a long filament of solar material that had been hovering in the sun's atmosphere, the corona, erupted out into space at 4:36 p.m.

The Coronal Mass Ejection traveled at nearly 1,500 kilometres per second. The CME did not travel directly toward the earth, but did connect with the earth's magnetic environment, or magnetosphere, causing aurora to appear on the night of Monday, September 3, 2012. 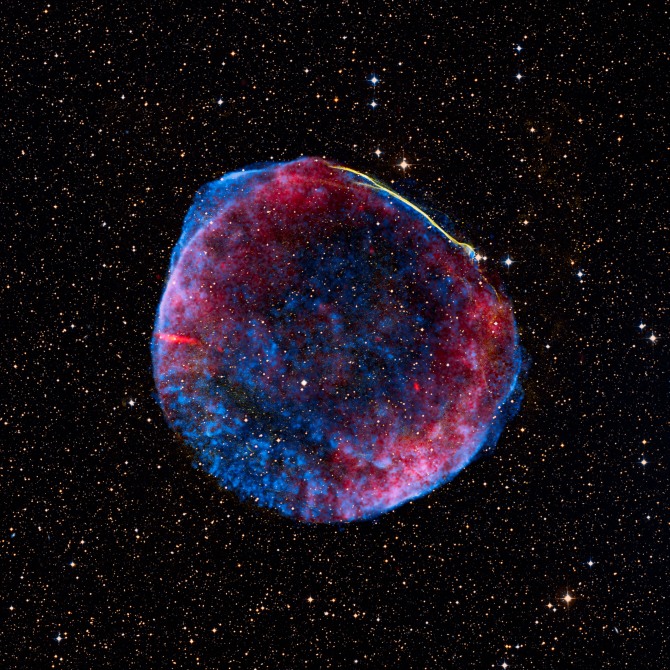 This image is a composite of visible (or optical), radio, and X-ray data of the full shell of the supernova remnant from SN 1006. The radio data show much of the extent that the X-ray image shows. In contrast, only a small linear filament in the northwest corner of the shell is visible in the optical data.

The object has an angular size of roughly 30 arcminutes (0.5 degree, or about the size of the full moon), and a physical size of 60 light-years (18 parsecs) based on its distance of nearly 7,000 light-years.

The small green box along the bright filament at the top of the image corresponds to the dimensions of the Hubble release image. This illustration shows a stage in the predicted merger between our Milky Way galaxy and the neighboring Andromeda galaxy, as it will unfold over the next several billion years.

In this image, representing the earth's night sky in 3.75 billion years, Andromeda (left) fills the field of view and begins to distort the Milky Way with tidal pull. The icy surface of Europa is shown strewn with cracks, ridges and "chaotic terrain," where the surface has been disrupted and ice blocks have moved around. New laboratory experiments show that water ice and frozen sulfur dioxide react even at the frigid temperatures of Europa.

Because the reaction occurs without the aid of radiation, it could take place throughout the moon's thick ice layer -- an outcome that would revamp current thinking about the chemistry and geology of this moon and perhaps others. 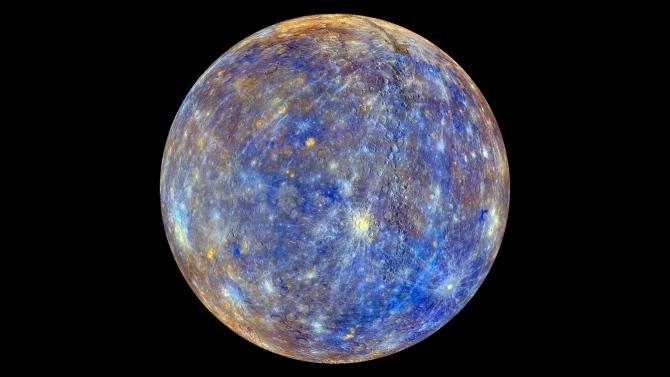 This colourful view of Mercury was produced by using images from the color base map imaging campaign during MESSENGER's primary mission. These colors are not what Mercury would look like to the human eye, but rather the colors enhance the chemical, mineralogical, and physical differences between the rocks that make up Mercury's surface.

The crater in the upper right whose rays stretch across the planet is Hokusai. 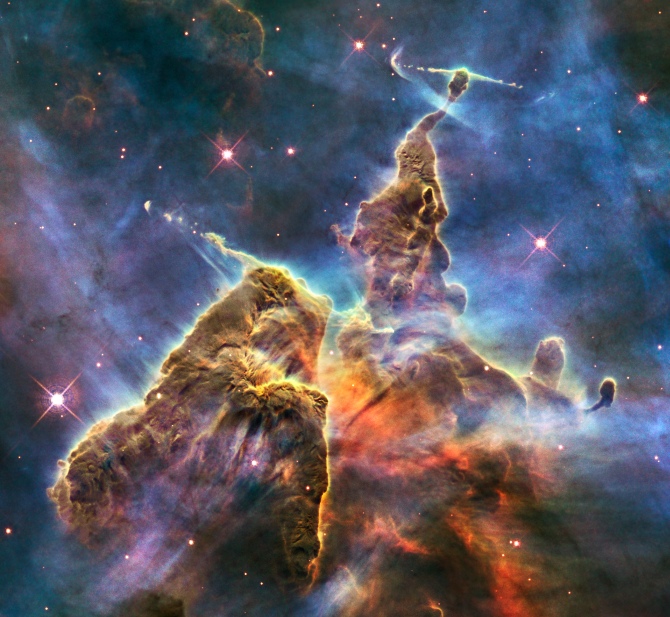 This brand new Hubble photo is of a small portion of one of the largest seen star-birth regions in the galaxy, the Carina Nebula. Towers of cool hydrogen laced with dust rise from the wall of the nebula.

The scene is reminiscent of Hubble's classic "Pillars of Creation" photo from 1995, but is even more striking in appearance. The image captures the top of a three-light-year-tall pillar of gas and dust that is being eaten away by the brilliant light from nearby bright stars.

The pillar is also being pushed apart from within, as infant stars buried inside it fire off jets of gas that can be seen streaming from towering peaks like arrows sailing through the air. This computer-simulated image shows gas from a tidally shredded star falling into a black hole. Some of the gas also is being ejected at high speeds into space. Astronomers observed a flare in ultraviolet and optical light from the gas falling into the black hole and glowing helium from the stars's helium-rich gas expelled from the system. 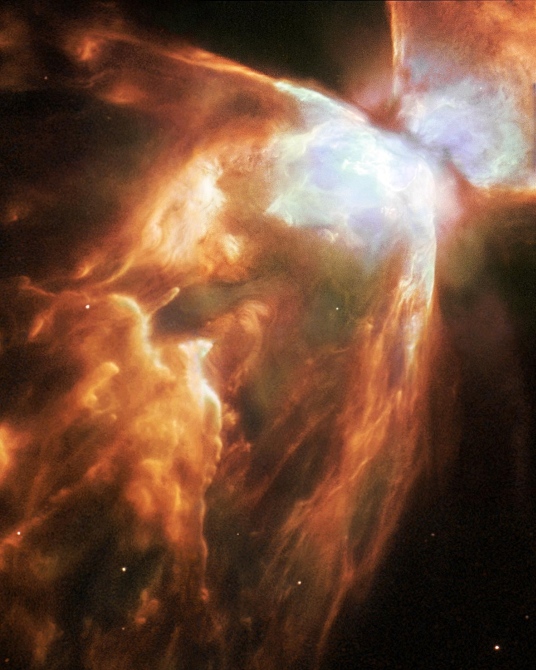 A Dying Star Shrouded by a Blanket of Hailstones Forms the Bug Nebula (NGC 6302). The Bug Nebula, NGC 6302, is one of the brightest and most extreme planetary nebulae known. The fiery, dying star at its center is shrouded by a blanket of icy hailstones. 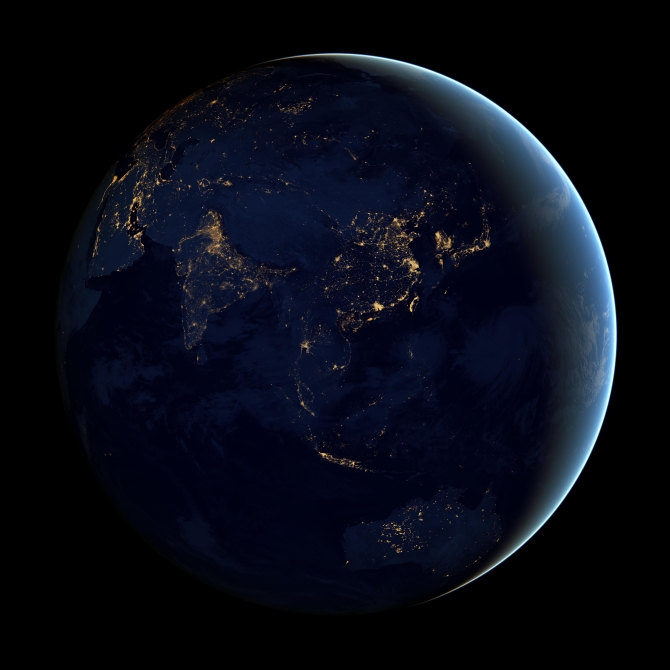 This image of Asia and Australia at night is a composite assembled from data acquired by the Suomi NPP satellite in April and October 2012. The new data was mapped over existing Blue Marble imagery of Earth to provide a realistic view of the planet.

The night-time view was made possible by the new satellite’s “day-night band” of the Visible Infrared Imaging Radiometer Suite. VIIRS detects light in a range of wavelengths from green to near-infrared and uses filtering techniques to observe dim signals such as city lights, gas flares, auroras, wildfires, and reflected moonlight. In this case, auroras, fires, and other stray light have been removed to emphasise the city lights.

This mosaic of M31 merges 330 individual images taken by the Ultraviolet/Optical Telescope aboard NASA's Swift spacecraft. It is the highest-resolution image of the galaxy ever recorded in the ultraviolet. The image shows a region 200,000 light-years wide and 100,000 light-years high (100 arcminutes by 50 arcminutes). 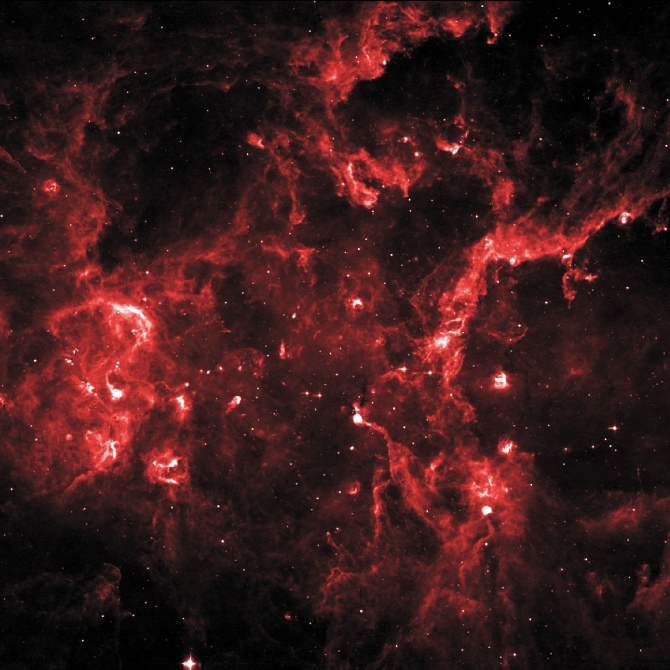 Cygnus X hosts many young stellar groupings. The combined outflows and ultraviolet radiation from the region's numerous massive stars have heated and pushed gas away from the clusters, producing cavities of hot, lower-density gas.

In this 8-micron infrared image, ridges of denser gas mark the boundaries of the cavities. Bright spots within these ridges show where stars are forming today. 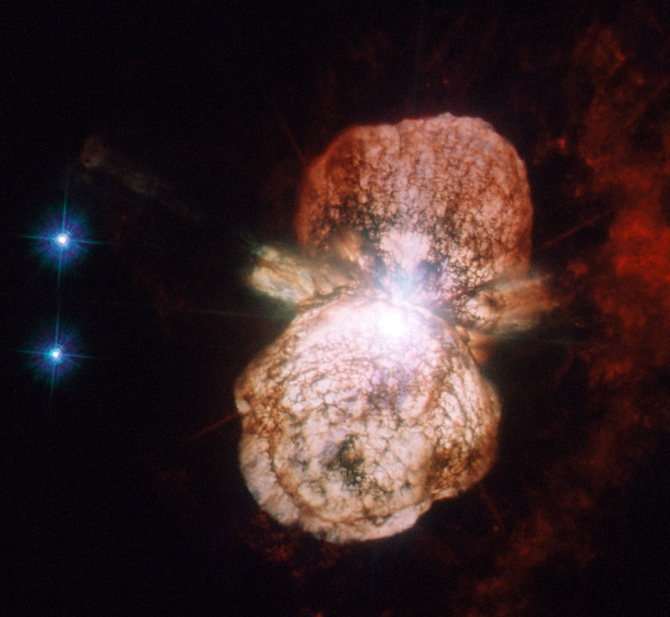 At the turn of the 19th century, the binary star system Eta Carinae was faint and undistinguished. In the first decades of the century, it became brighter and brighter, until, by April 1843, it was the second brightest star in the sky, outshone only by Sirius (which is almost a thousand times closer to the earth).

NASA's Hubble Telescope captured an image of Eta Carinae. This image consists of ultraviolet and visible light images from the High Resolution Channel of Hubble's Advanced Camera for Surveys. The field of view is approximately 30 arcseconds across. 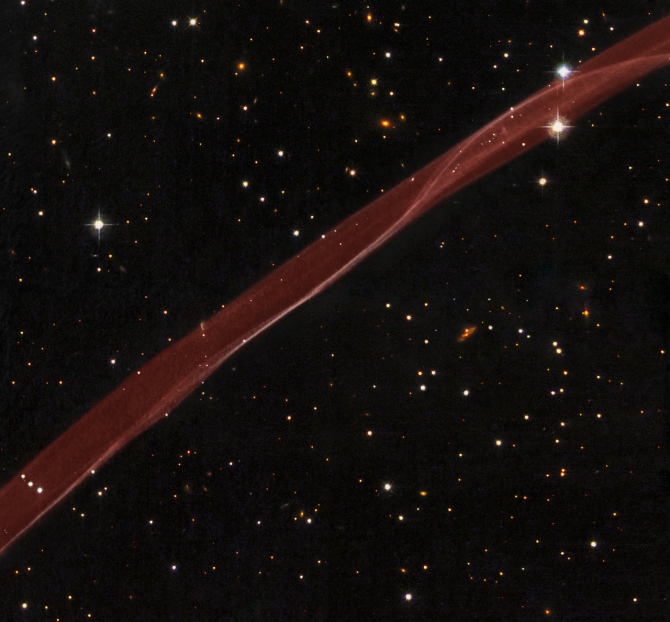 A delicate ribbon of gas floats eerily in our galaxy. A contrail from an alien spaceship? A jet from a black-hole?

Actually this image, taken by NASA's Hubble Space Telescope, is a very thin section of a supernova remnant caused by a stellar explosion that occurred more than 1,000 years ago. 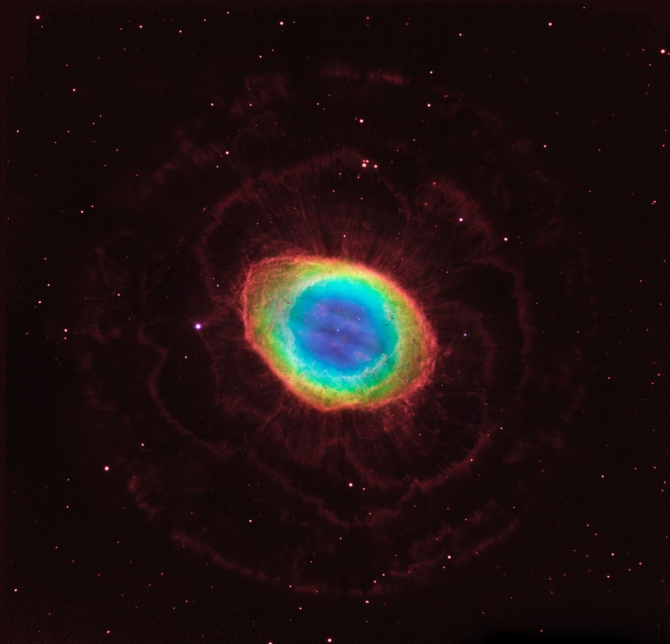 In this composite image, visible-light observations by NASA’s Hubble Space Telescope are combined with infrared data from the ground-based Large Binocular Telescope in Arizona to assemble a dramatic view of the well-known Ring Nebula. A 'Blue Marble' image of the Earth taken from the VIIRS instrument aboard NASA's most recently launched Earth-observing satellite -- Suomi NPP.

This composite image uses a number of swaths of the Earth's surface taken on January 4, 2012. The NPP satellite was renamed 'Suomi NPP' on January 24, 2012 to honor the late Verner E Suomi of the University of Wisconsin. 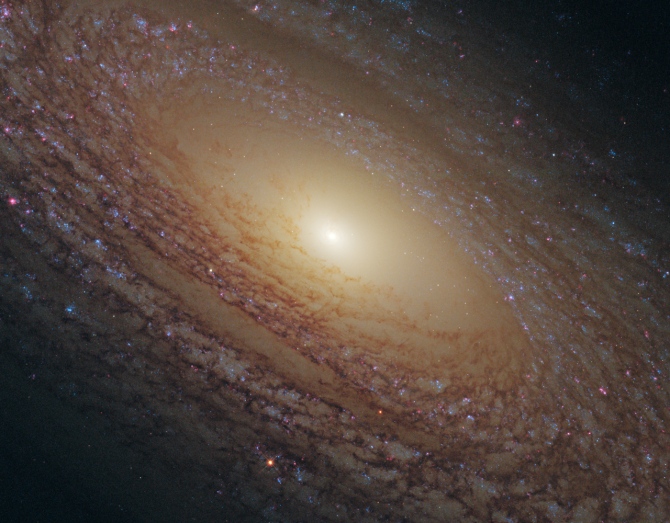 The Hubble Space Telescope revealed this majestic disk of stars and dust lanes in this view of the spiral galaxy NGC 2841.

A bright cusp of starlight marks the galaxy's centre. Spiralling outward are dust lanes that are silhouetted against the population of whitish middle-aged stars. Much younger blue stars trace the spiral arms. 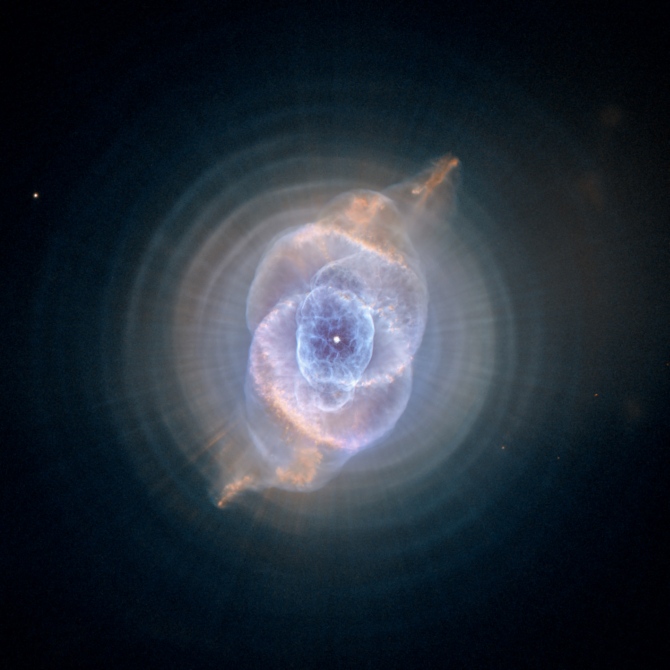 The Cat's Eye Nebula, one of the first planetary nebulae discovered, also has one of the most complex forms known to this kind of nebula. Eleven rings, or shells, of gas make up the Cat's Eye.

The full beauty of the Cat's Eye Nebula is revealed in this detailed view from NASA's Hubble Space Telescope.

The image from Hubble's Advanced Camera for Surveys shows a bull's eye pattern of eleven or even more concentric rings, or shells, around the Cat's Eye. Each 'ring' is actually the edge of a spherical bubble seen projected onto the sky -- that's why it appears bright along its outer edge. 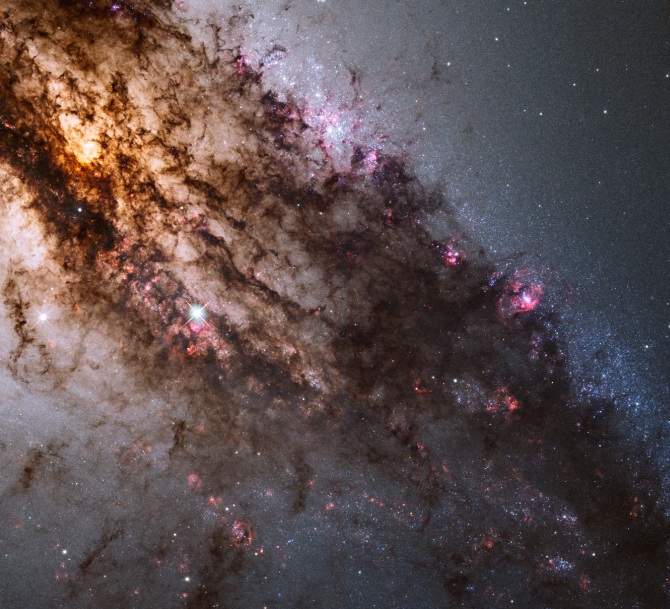 Hubble's panchromatic vision, stretching from ultraviolet through near-infrared wavelengths, reveals the vibrant glow of young, blue star clusters and a glimpse into regions normally obscured by the dust.