Sign in  |  Create a Rediffmail account
Rediff.com  » News » US has 7,300 nuclear weapons, do you know India's count? 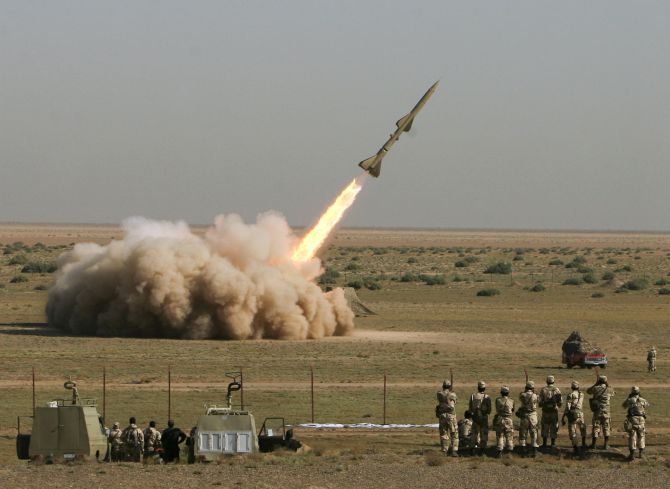 Image: An Iranian Tondar missile is launched during a test at an unknown location in central Iran
Photographs: Fars News/Ali Shayegan/Reuters

Data released by the Stockholm International Peace Research Institute states that while the overall number of nuclear weapons in the world continues to decline, none of the nuclear weapon-possessing states are prepared to give up their nuclear arsenals for the foreseeable future.

Russia and the United States have reduced their inventories but still account for more than 93 per cent of all operational nuclear warheads.

But even though there has been a steady decline in the overall number of nuclear warheads in the world over the past five years, legally recognised nuclear weapon states -- China, France, Russia, the UK and the USA -- are either deploying new nuclear weapon delivery systems or have announced programmes to do so.

India and Pakistan continue to develop new systems capable of delivering nuclear weapons and are expanding their capacities to produce fissile material for military purposes.

There is an emerging consensus in the expert community that North Korea has produced a small number of nuclear weapons, as distinct from rudimentary nuclear explosive devices.

Take a look at the nine countries with nuclear weapons. 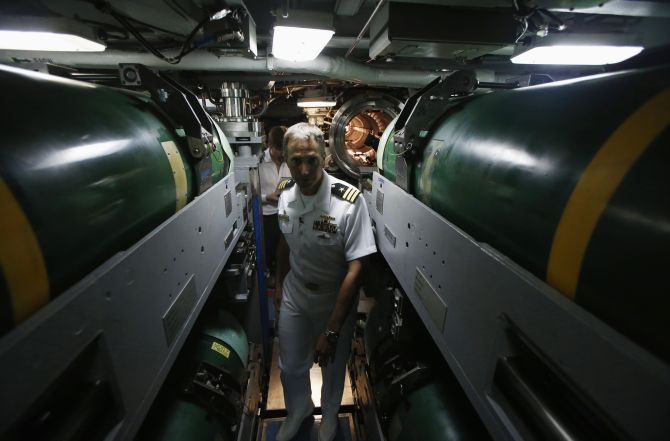 The Stockholm International Peace Research Institute states that the United States maintained an estimated arsenal of approximately 2100 deployed nuclear warheads, consisting of roughly 1920 strategic and 184 non-strategic warheads. In addition to this, about 2,660 warheads were held in reserve and another 2,550 warheads were awaiting dismantlement, for a total US stockpile of roughly 7,300 warheads, according to the Stockholm International Peace Research Institute.

Over the next decade, the USA plans to spend up to $350 billion on modernising and maintaining its nuclear forces. In addition, over the next two decades the USA will complete the full-scale production of an improved nuclear warhead for Trident II D5 submarine-launched ballistic missiles and begin modernization work on two others, while building new nuclear weapons production and simulation facilities. 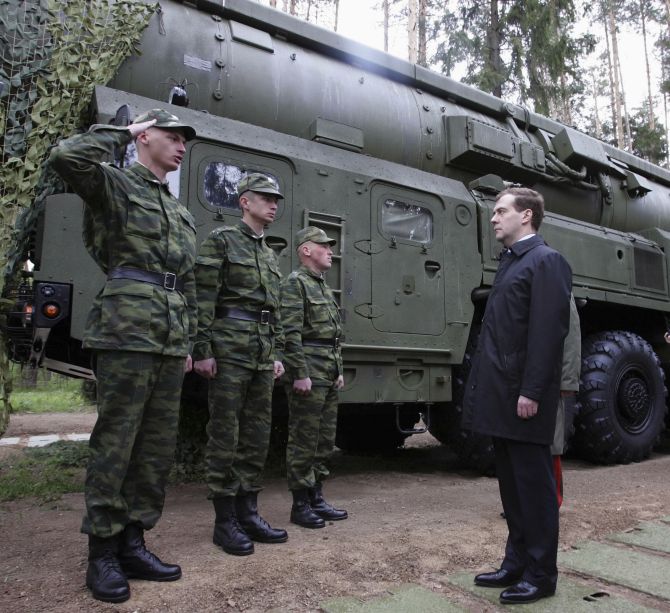 Image: Russia's President Dmitry Medvedev (R) visits a missile base in Teikovo in the Ivanovo region, May 15, 2008
Photographs: Reuters

Russia is in the middle of a broad upgrade of its strategic nuclear forces that over the next decade will retire all Soviet-era inter-continental ballistic missiles. A new ‘heavy’ ICBM with multiple warheads is also in development with expected deployment around 2020.

A new nuclear-powered attack submarine (Yasen) is about to enter service with a new long-range sea-launched cruise missile. 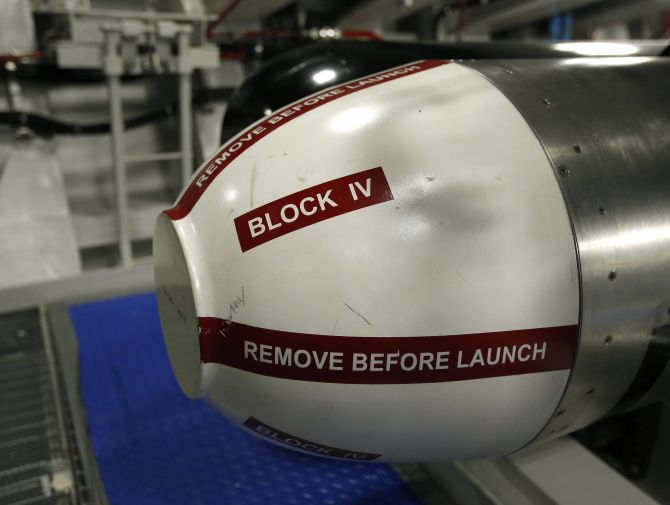 Image: A dummy Tomahawk land attack missile is seen onboard HMS Artful, the third of the Royal Navy's Astute class submarines, as it approaches completion at the company's Barrow-in-Furness shipyard in northern England
Photographs: Phil Noble/Reuters

The UK possesses an arsenal of about 160 operational nuclear warheads that are available for use by a fleet of four Trident SSBNs based at Faslane, Scotland. The UK leases 58 Trident II (D5) SLBMs from the United States Navy under a system of ‘mingled asset ownership’. 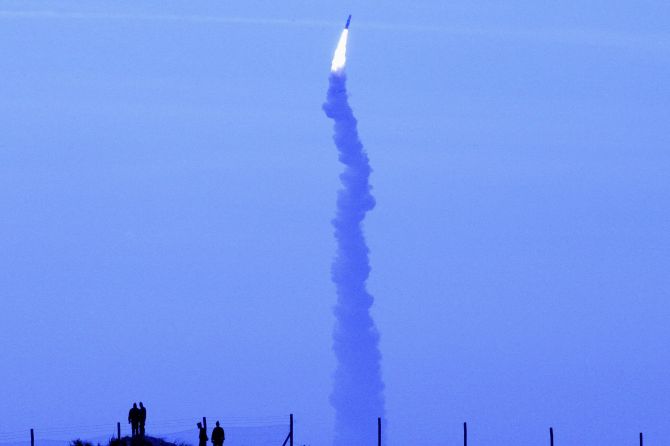 China maintains an estimated total stockpile of about 250 nuclear warheads. It is widely believed that in peacetime China stores its nuclear warheads in storage facilities separate from their delivery vehicles and that they are not ready for immediate launch, states the Stockholm International Peace Research Institute.

Approximately 190 of the total stockpile of 250 warheads are assigned to these forces. 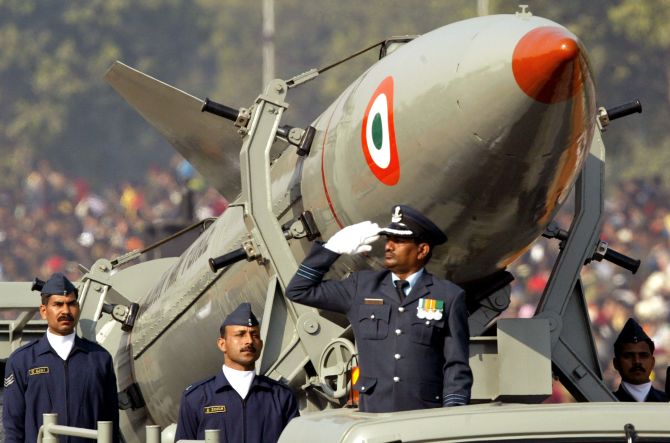 India is estimated to have an arsenal of 90 to 110 nuclear weapons. This figure is based on calculations of India’s inventory of weapon-grade plutonium as well as the number of its operational nuclear-capable delivery systems. India’s nuclear weapons programme is based primarily on plutonium.

India’s nuclear doctrine is based on the principle of a minimum credible deterrent and no-first-use of nuclear weapons. There has been no official statement specifying the size of the arsenal required for a ‘minimum credible deterrent’ but according to the Indian Ministry of Defence it involves ‘a mix of land-based, maritime and air capabilities’.

In 2013, India continued work on several new types of advanced nuclear-capable ballistic missiles and cruise missiles. This included a test-launch of a submarine-launched missile that will be deployed on India’s first indigenously built nuclear-powered submarine, INS Arihant.

India also conducted a second successful test-launch of a new road-mobile missile, the Agni V, which will reportedly have a near-intercontinental range ballistic missile and be capable of reaching targets throughout China. The missile is expected to be inducted into service in 2015. 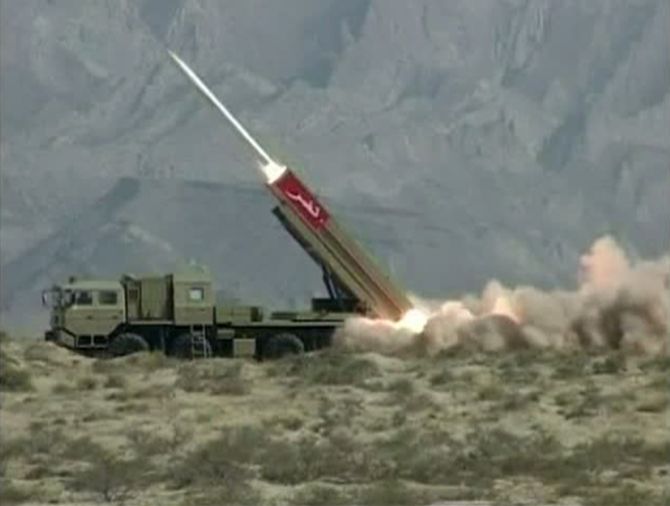 Image: This still image from a Pakistan military handout video shows a Hatf IX (NASR) missile being fired during a test at an undisclosed location in Pakistan April 19, 2011
Photographs: Reuters

Pakistan is estimated to possess about 100–120 nuclear weapons for delivery by aircraft and land-based missiles. Pakistan continues to develop new types of nuclear-capable medium and short-range ballistic missiles and cruise missiles.

Pakistan is expanding its capacities to produce fissile material for military purposes.

It remains unclear whether Pakistan intends to construct a fifth reactor at the Khushab site. It is widely believed that each of the four existing reactors has a capacity of 40–50 megawatts-thermal. The Khushab nuclear complex, combined with Pakistan’s continuing HEU production, could increase Pakistan’s annual nuclear warhead production capacity several-fold, depending on the country having sufficient capacity to reprocess spent fuel as well as an adequate supply of uranium to fuel the reactors at Khushab. 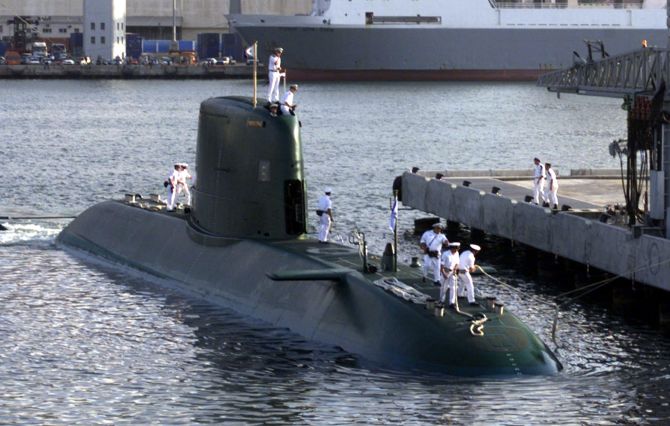 Israel continues to maintain its long-standing policy of nuclear opacity. It neither officially confirms nor denies that it possesses nuclear weapons.

It is estimated that Israel has approximately 80 intact nuclear weapons, of which 50 are for delivery by Jericho II medium-range ballistic missiles and 30 are gravity bombs for delivery by aircraft.

There was renewed speculation in 2012 that Israel may also have developed nuclear-capable submarine-launched cruise missiles.

It is estimated that North Korea has built 6­­–8 nuclear weapons. In 2013 North Korea initiated a major effort to refurbish and modernize its plutonium production capabilities. Commercial satellite imagery indicated that North Korea appeared to have begun producing fuel rods for the restarted nuclear research reactor at its Yongbyon nuclear complex following extensive renovation work. The reactor is estimated to be capable of producing approximately one bomb’s worth of plutonium per year.

It remains unclear whether North Korea has produced highly enriched uranium (HEU) for military purposes. The airborne samples that were collected by the Comprehensive Nuclear-Test Ban Treaty Organization’s International Monitoring System after North Korea’s third nuclear test explosion, in February 2013, were inconclusive in determining whether the nuclear device had used HEU as the fissile material, rather than plutonium, which was believed to have been used in the two previous tests.