Sign in  |  Create a Rediffmail account
Rediff.com  » News » Corruption can no longer be brushed under the carpet

Corruption can no longer be brushed under the carpet 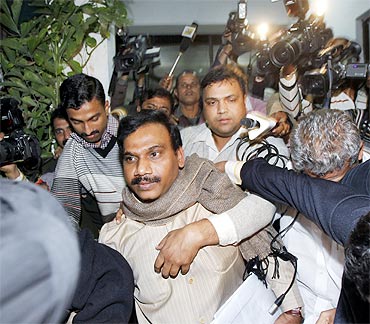 The ongoing slanging match between the civil society group and the government poses a danger of stalling the Lokpal Bill and derailing the movement against corruption.

The events of the last few months have made it clear that the issue of corruption can no longer be brushed under the carpet.

Public perception is that there is a coalition between the bureaucrats, politicians and industrialists, which is robbing the nation of its vital natural resources. The setting up of the Joint Parliamentary Committee on 2G scam and the uncovering of corruption indulged in by people at the top by the Central Bureau of Investigation, have confirmed it.

The concerned minister is in Delhi's Tihar jail along with many of his associates.

For long, the common man has been reconciled to our feudal form of democracy, where 'netas' were the new lords of all that they surveyed. Corruption at the top was accepted among all political parties. 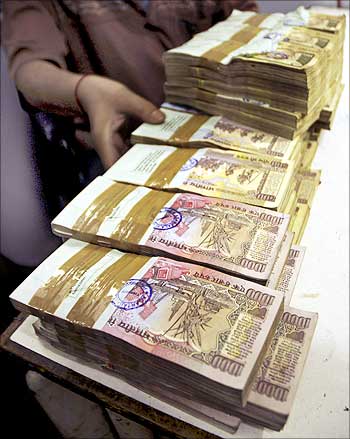 In public perception, the quality of life changed for Bharatiya Janata Party leaders when the party led National Democratic Allaince came to power.  They were catching up with the Congress leaders in leading a prosperous way of life.

As for corruption in the states, the less said the better. One would have to conduct a huge survey to conclude as to which state is at the top of the ladder of corruption.

Former Prime Minister Indira Gandhi had once remarked that corruption was a global phenomenon. That was and remains an absolutely truthful statement. Yes, even the highly developed countries suffer from this malaise, but then, it does not hurt the common man in those countries. The day-to-day life of the ordinary citizen is free from extortion that an average Indian faces every day.

It is this criminal extortion faced by the common man that has made life hell in India. If you want to renew your passport, you meet the touts outside the passport office. They ensure that your job is done on time -- for a price. Go into any office dealing with the public, be it the police or municipal administration, anywhere in India, nothing gets done unless you pay a price.

What can be a greater expose for India's law and order situation than the fact that most residential areas all over India have their own security set up? Why do we then pay taxes to the government if it cannot ensure security for its citizens?

It is normal today that if you write a letter to any government office, you will never get even get a two-line reply that your letter has been received. There is no culture of returning your phone calls if you manage to find the number of a concerned official who is supposed to deal with your matters.

Gone are the days when government departments used to send a cyclostyled letter saying, 'your letter has been received and the matter is under consideration'.

However, if you pay a 'facilitation fee', the file can move fast. Is this not extortion? Many a junior government servant can be heard saying that if netas and senior officers can make money, then why can't we?  While netas extort money from the rich and powerful industrialists, the junior public servants do this from the aam admi.

In the India of today paying bills for utilities like water, electricity, municipal house tax, and telephone is a painful process. You invariably end up either spending a lot time yourself or hire collectively someone who will do the job. This may not be a bribe, but speaks volumes about the way these services are administered. 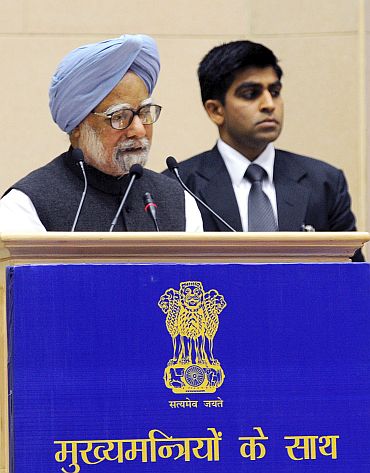 The simple fact is that there is gross inefficiency and a lack of care in administering the towns and cities of India. Look at the plight of the national capital, Delhi. Come rains, and the roads get flooded. Crores were spent on the roads during the Commonwealth Games last year.

People watch with anger the red beacon cars moving along the roads, escorted by the Black Cats. Why this special protection for a chosen few?

Electoral politics in India has become an industry by itself.  You spend money to get elected and indulge in making big money. People find our administration hardly responsive.

The country has a distinguished economist as its prime minister. He is surrounded by an array of other brilliant economists. Yet, all of them together, are unable to control the price rise and increasing inflation.

Public perception is that what the brilliant economists recommend can never control the parallel economy-the black economy of India that fuels high prices.

The issue of Lokpal is a symptom of the growing anger that the people of India have towards the government - both at the Centre and state. 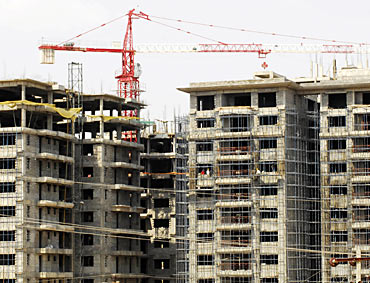 It is well known that India's real estate property market is the biggest single generator of black money. In India, you cannot buy a piece of property, big or small, without having to dole out substantial cash. Yet, no effort has been made to deal with this menace apart from lip service.

The operation of dual economy results in substantial loss of revenue both to the state and the Centre. The 'cash economy' in India is perhaps as big if not bigger than the white economy. It is this cash economy that continues to fuel the rise in prices.

Lokpal can only really deal with corruption at higher levels 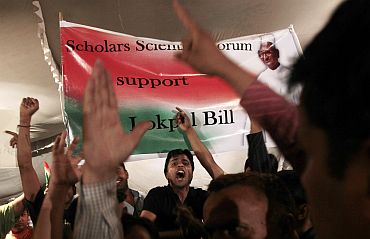 Image: Supporters of Anna Hazare at a protest against corruption in New Delhi
Photographs: Reuters

The Right to Information Act has done some good, but more is needed. The government needs to consider the kind of administrative reforms that can make the civil servants responsive and accountable and become what they are meant to be: 'public servants'. Their response to the public and resultant action should be made time bound.

Will the Lokpal be able to correct this? The Lokpal can only really deal with corruption at higher levels. The Comptroller and Auditor General has been pointing out flaws, but there is a reluctance to accept them. Whatever little action we have seen in the recent past against the huge scams, has been possible due to the push given by the Supreme Court.

One hopes that civil service representatives and the government will be flexible in formulating an acceptable Lokpal Bill that would help in combating corruption.

It is time that the leaders apply themselves truthfully to the service of the people-- the cause for which India fought for her freedom. They should not stand on prestige.  Anna Hazare should not adopt a rigid position and turn into another Baba Ramdev, who threw away the enormous goodwill he had.

The Lokpal Bill is not the final answer to all our ills.  Let it not be forgotten that corruption was not a major issue when the country became free in 1947, but sixty odd years later, this issue alone has become a blot on independent India''s international standing.

Some have even given a call for second fight for freedom - a fight for freedom from corruption. Yes, making the country free of corruption could well become a major movement in the days ahead. Let us heed this warning.
More
Source: ANI
Print this
article