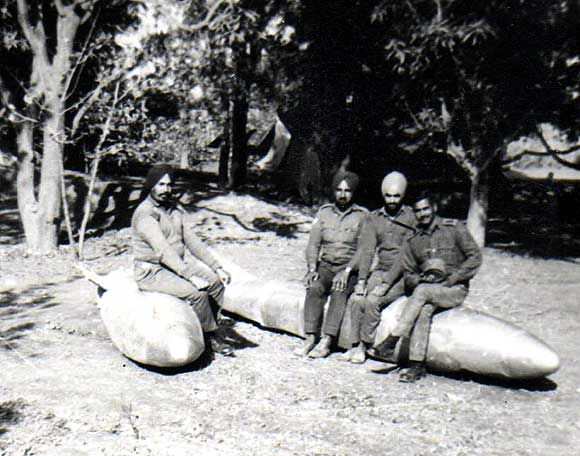 'When I looked at the map I was astonished to see the extent of the enemy minefields and the heavy concentration of armour and artillery.... This deployment was specially designed to confront the numerically larger Indian Army. Of course, it didn't work!'

'Later we learned how poor 'our intelligence' was. There was not even one-third deployment of the enemy on the ground!!' remembers Colonel John Taylor (retd), a young captain in the 1971 war.

It was July 1971. I had completed two-and-a-half years of my tenure with the Ladakh Scouts. In this time I had visited the most remote parts of Ladakh, including Chungtash, and the Karakoram Pass where I was assigned with the honourable task of planting the National Flag (made of metal) to demarcate the border with Tibet.

I prided myself with knowing Ladakh like the back of my hand (because I had physically walked through all parts of it!).

I now looked forward to a tenure in a nice peace station, where I could spend some quality time with my wife Thelma and my newborn daughter Rachel. The news of her birth was radioed to me when I was coming down from the Karakoram Pass. There were no mobile phones or dish-antennae then.

But the political scenario was changing rapidly. War clouds suddenly started looming over the horizon -- you could read it in the hostile change in attitude of the Pakistani soldiers who were just 100 yards away.

We were in an eyeball to eyeball situation in area 'Black Rock'. (We learnt that each day thousands of Bangladeshi refugees were pouring into India.) There was a lot of sabre-rattling on both sides.

In the middle of all this, my posting came as General Staff Officer Grade 3 Intelligence (G3 in short) to a brigade in Gwalior. I was delighted! Going to a peace station at last!

The commander of the Partapur Sector (where I was posted) refused to let me go, as I was the only officer who knew the terrain, knew the Ladakhi Troops and had first hand knowledge of the enemy layout.

A case was taken up with Army headquarters.

A strike across the cease fire line was under consideration (as an option). This involved extensive patrolling, rehearsals, cliff assault practices, and keeping high the troops's morale.

My Company ('D' Company, Ladakh Scouts) was earmarked to capture the 'Highest held picquet in the World' which they eventually did, acquiring one Mahavir Chakra, one Vir Chakra and two Sena Medals in the process. The sad part is that I was not part of it.

In the tug-of-war between the two headquarters, I was ordered to report to my new location immediately! 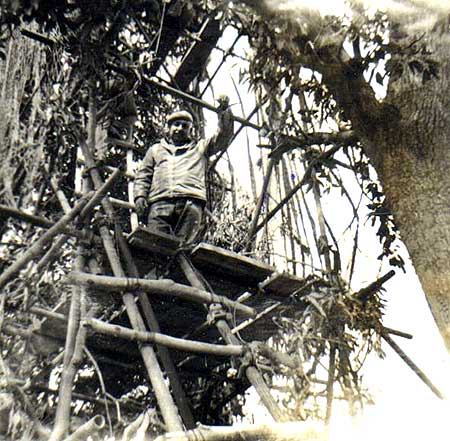 On the evening of December 1, 1971 I reported to the brigade headquarters, which had moved from Gwalior and was located at Bhamani, Punjab, close to the banks of the Ravi river.

I was taken to meet the commander, Brigadier Prithvi Raj. It was 05:30 pm and was getting dark. The brigade major said, "Sir, this is our new G3, Captain John Taylor." The commander commented, " I can hardly see his face." I replied, "Sir, you are not missing much!"

He chuckled and took an instant liking to me. For the remaining part of the war we were always together. I learnt a lot from him, the most important being how to read the battle situation, how to take 'on the spot' decisions and how to pass the commander's instructions to the commanding officers of the three battalions which were under his command.

The job of the G3 is to constantly update all information of enemy and own positions, minefields, patrolling etc. We were part of the 'Strike Corps.' When I looked at the situation map, I was astonished to see the extent of the enemy minefields and the heavy concentration of armour (tanks) and artillery. I assessed it to be quite a formidable opposition.

This deployment was the American taught, 'extended defence' -- specially designed to confront the numerically larger Indian Army. Of course, it didn't work! Later we learned how poor 'our intelligence' was. There was not even one-third deployment of the enemy on the ground!! 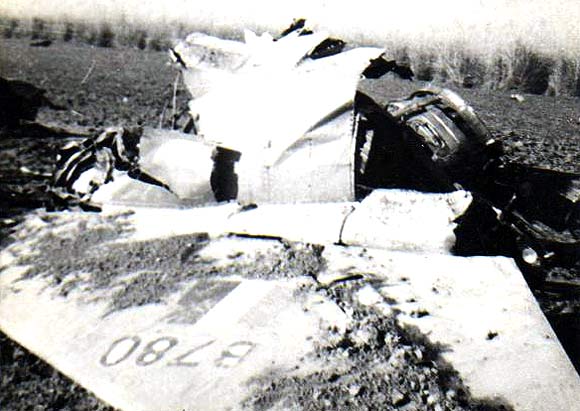 The Strike Corps was supposed to advance 15 to 20 kms in a day. (Gosh! It appeared as Formula One racing for me as I had got used to High Altitude Warfare!) Now this meant Shakargarh today, Sialkot tomorrow, Zafarwal next and watch out Islamabad -- here comes the Strike Corps!

It just did not work out that way because of extensive minefields and enemy opposition.

For the duration of the war, we advanced only 15 to 18 kms into Pakistan. When the ceasefire was declared we had only surrounded Shakargarh. This was part of the plan HOLD in the West, STRIKE in the East.

From December 1 to December 3, nothing happened. My friend Major G V Raju (signal officer in charge of communications) lamented, "We've been here for more than two months and nothing has happened!" I replied, "Don't worry, I have arrived, there is always action wherever I go!"

Lo and behold, that very evening, on December 3, at about 05:45 pm, just as dusk was settling in, Pakistani jets came screeching overhead at treetop level (to avoid detection) to strike at our airfields in Pathankot, Adampur etc.

The enemy air strike was copy book Israeli in style -- but was carried on the most expected lines and totally failed in making any impact. Incidentally, the armoured assault on Longewal was also a 'bad version' of the Israeli assault on the Golan Heights.

Soon after, the Engineers built a 'Class 60 Bridge' over the Ravi River, working all night and into the early hours so as to facilitate the induction of an armoured brigade. Our brigade provided 'protection' and carried out 'Bank Control' for them.

The plan was HOLD in the West, STRIKE in the East 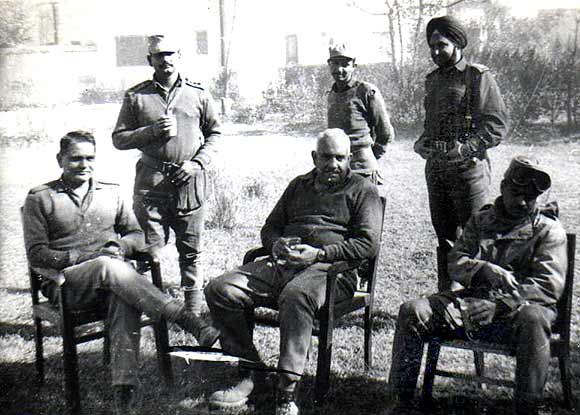 The Pakistani, as always, struck first, eliminating all border out posts held by the Border Security Force.

'Op Ablaze' swung into action. The tanks poured in. The Infantry attacked at night and recaptured all the border outposts and pushed on towards Kot Naina (Nainakot in the map).

Sitting in the Ops Room, we were able to intercept a Pakistani Artillery Observation Post Officer giving news of the advance of the 'kafirs.'

It was a chilling experience following the advance of our troops through his radio transmissions. He always blew twice into his microphone before uttering each sentence.

"Shall I finish them off?"

"Why aren't you giving me artillery support?" All these messages were to his commander who kept insisting, "Retreat for now. We have bigger plans for them."

Nothing stopped the advance of our formation. We received little or no opposition till Kot Naina.

The Pakistanis fooled us by showing us two tanks on the extreme of a huge mango grove and at dawn and at dusk they moved their tanks from left to right and played taped recordings of tanks revving up over a loudspeaker to give the impression that there was a squadron of tanks in the grove! That trick really fooled us!

Our brigade advanced to Kot Naina and took over a large abandoned hospital built by the World Health Organisation. The Sikh jawans were thrilled. Large rooms and 200 buffaloes meant comfort and unlimited supply of milk and lassi! In a war scenario this was the height of luxury, though it lasted for just a couple of days!

We captured many POWs, including the Punjab governor's grandson 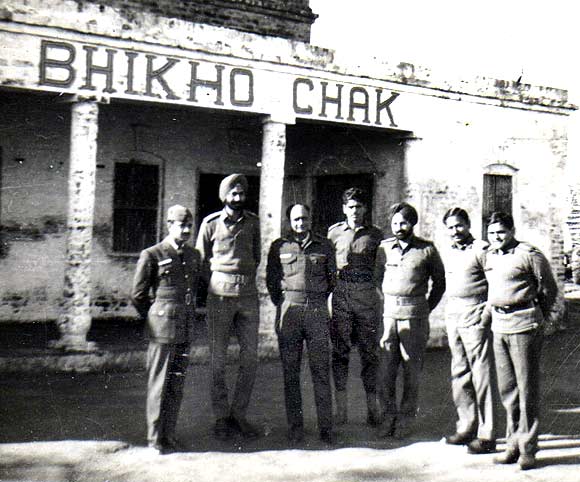 We advanced to Bhikoo Chak and held the bank of the Ujh Nala on two axes. We captured territory which included over a hundred villages.

The Pakistani civilians had fled. Only the very old and infirm were left behind. We treated them with respect and sent them to safer places behind.

We captured a number of Prisoners of War, POWs, including a young lieutenant, who turned out to be the grandson of the first governor of Punjab, who later became the president of Pakistan. He was treated with honour.

A large number of Bengali officers and jawans from the Pakistan army came over to us before, during and after the ceasefire. They all wanted to go to 'Bangladesh.. They would sing Aamaar shonaar Bangla... with obvious nostalgia. Bengali culture had dominated their ethos more than religion at that time.

I would leave the brigade headquarters after an early breakfast and accompany the commander on his reconnaissance trips, and visits to units deployed forward. We would return late in the evening.

Every time I returned to my room/bunker, my sahayak, a 20-year-old sepoy named Roodh Singh, would display in the tent some bright object, one brought from the villages.

Bright coloured razais, lacy table covers, prayer mats, bags, trinkets etc. This was his way of showing how much he cared for me.

I would be annoyed and order each item to be thrown out! Sometimes he would grin and declare in rustic Punjabi, "But Sir, it is so pretty! Imagine the beautiful Pakistani damsel who must have crafted this with her delicate hands!" Mischievous rascal! A loyal and affectionate companion, he made me laugh in those very trying times.

Just when we were geared up to make a push for Sialkot, Ceasefire was declared 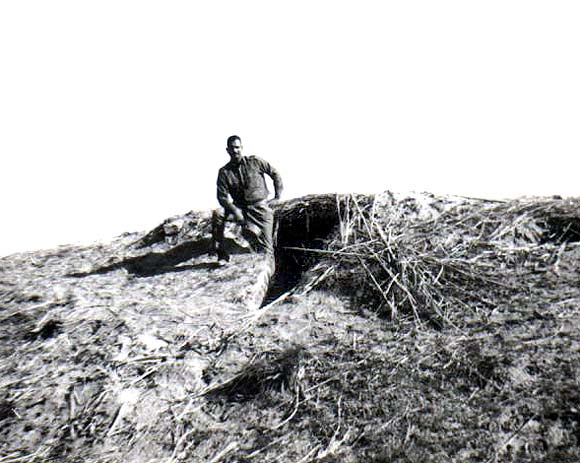 The war raged on.

When things were quiet in our sector, we would hear the bombardment and firing going on all night in the famous Battle of Basantar, which was just north of us. It was where the Param Vir Chakras were awarded to Major Hoshiar Singh and the late Second Lieutenant Arun Khetrapal.

We had our share of action, in which both sides suffered casualties in the Battle for Shakargarh. Just when we were geared up to advance further, making a push for Sialkot, the Ceasefire was declared on December 18.

Strange it was, that on the night of the ceasefire both sides pounded each other endlessly with artillery fire, as if they wanted to finish their entire stockpile of ammunition before midnight!

Incidentally, this happened during the 1965 war. During the 1971 Indo-Pak war, like Emperor Babar, I broke my cup of wine. I still do not drink alcohol. One positive point from the War!