Pakitsan President Asif Ali Zardari on Monday returned to Karachi from Dubai, where he had gone almost a fortnight ago to seek treatment for a heart condition, triggering rampant speculation that he might be on the verge of resigning.

Zardari, along with his daughter and personal staff, flew from Dubai to Karachi in a special aircraft that landed in a Pakistan air force base in the southern port city shortly after 1:00 hours (local time). The president drove in a motorcade from the airbase to Bilawal House, his family's private residence.

A sizeable number of policemen and security personnel were deployed along the route from the airbase to Bilawal House. The police also blocked traffic at key intersections along the route.

Manzoor Wasan, the home minister of Sindh province, told reporters that the president would stay at Bilawal House. However, Wasan said he had no details of Zardari's itinerary or how long he intended to stay in Karachi.

The 56-year-old president's abrupt departure for Dubai on December 6 to seek treatment for what officials said was a heart condition triggered widespread speculation that he might quit due to pressure from the military establishment over a secret memo that had sought United States help to help prevent a feared coup.

Zardari was admitted to the American Hospital in Dubai, where he underwent a battery of tests. Doctors said the results of the tests were normal and advised Zardari to rest and recuperate.

Leaders of the ruling Pakistan People's Party dismissed reports that Zardari had suffered a stroke or that he would resign. They also said he would return to Pakistan in time for events to be held on December 27 to mark the death anniversary of his wife, former premier Benazir Bhutto.

The Supreme Court will hear a case regarding a probe into the 'memogate' scandal later on Monday.

Zardari was the only one of 10 residents who did not submit his reply in the case within a deadline set by the apex court.

A presidential spokesman at Bilawal house, Ejaz Durrani said in a statement that Zardari had recovered completely and was in good health. "The president will remain in Karachi for a few days before going to Islamabad. He is in good health and spirit and will soon resume political activities. He will also be going to Larkana to address the people on the death anniversary of former prime minister, Benazir Bhutto Shaheed on December 27," Durrani said.

Pakistan Information Minister Firdous Ashiq Awan said that with the return of Zardari the hopes and desires of some people who were hoping for a change in government had been dashed. "All those people who made speculations and spread rumors about the president should now publicly apologise for their actions," she said. 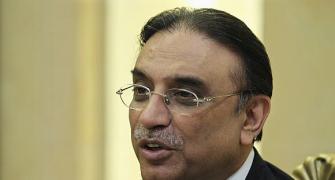 Speculation on Zardari's exit continues despite US denial