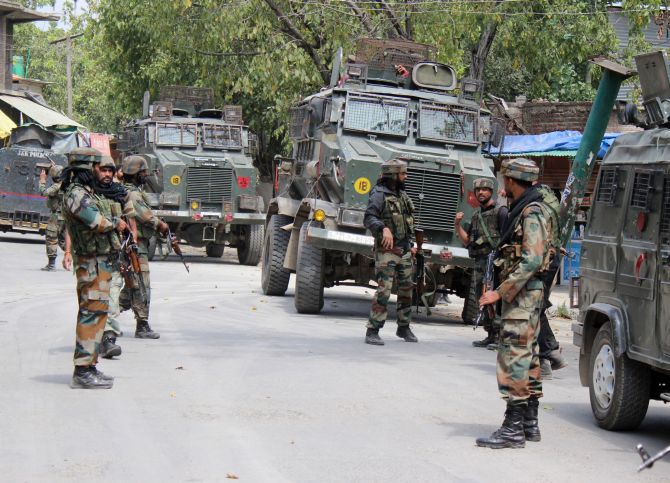 IMAGE: Security forces during a cordon and search operation in Pulwama district on Monday. Photograph: Umar Ganie for Rediff.com

A youth was killed and another injured after security forces allegedly fired on protesters during clashes in Jammu and Kashmir's Pulwama district on Monday.

The forces launched a cordon-and-search operation in over a dozen villages in Pulwama in the morning, following information about the presence of terrorists in the area, a police official said.

At the time of the operation, a group of youths started pelting stones at the forces in some places.

Two persons were injured in firing by the forces during clashes in Gusoo village, the official said.

The two were taken to a hospital, from where, one of them, Fayaz Ahmad Wani, was referred to the SMHS Hospital in Srinagar.

Wani was, however, declared dead at the hospital, he said.

Clashes between the protesters and security forces were going on when last reports came in.

The search operation is in progress, he added.