Source: PTI
June 26, 2012 18:17 IST
A two-decade-old graft case has proved to the nemesis of veteran Congress leader Virbhadra Singh who resigned as Union Minister on Tuesday, a day after charges were framed against him by a Himachal Pradesh court.

Ironically, 78-year-old Singh, the minister for small, micro and medium industries, celebrated 50 years in politics on Sunday when he declared that he was fit as a fiddle to bring the Congress back in power in Himachal Pradesh which is slated to go for assembly polls later this year.

A five-time Chief Minister, Singh and his wife Pratibha Singh, were slapped with charges of corruption and criminal misconduct by the Himachal court in a 23-year-old case.

The case against Singh pertains to a CD recording of a 1989 conversation in which he and his wife have been accused of discussing with an IAS officer kickbacks from industrialists who want to invest in the state.

Singh and his wife were booked in the case on August 3, 2009, on the basis of an audio CD released by his arch rival and former Congress Minister Vijay Singh Mankotia in May 2007 and the prosecution filed the case in the court of special judge in October 2010.

Considered a doughty fighter, Singh has accused the Bharatiya Janata Party government in the state of targeting him and vowed to come out clean.

A six-term Lok Sabha member, Singh was appointed as the Union Minister of Steel when the United Progressive Alliance-II returned to power in 2009. He is the third Union minister to resign following corruption charges, the earlier two being Dravida Munnetra Kazhagam leaders A Raja and Dayanidhi Maran.

Singh has also served as Union deputy minister for tourism and civil aviation under late Indira Gandhi from 1976-77 and as Minister of State for Industry in 1982-83.

A former Stephanian, he was the only Congress leader to win from Himachal Pradesh in the just-concluded Lok Sabha polls. He defeated BJP's Maheshwar Singh by nearly 14,000 votes in the Mandi constituency.

A Rajput leader from the Bushahr royal family, Singh became chief minister of Himachal Pradesh for the first time in 1983. Subsequently he became was at the helm of affairs in the state in 1990, 1993, 1998 and 2003.

In 1998, he led the state for some days before present Chief Minister Prem Kumar Dhumal with the help of Himachal Vikas Congress of former Union Minister Sukhram Ram toppled his government to form a coalition ministry.

He had been associated with various of cultural and social organisations inducing Indo-Soviet Friendship Society and Sanskrit Sahitya Sammelan, Himachal Pradesh. 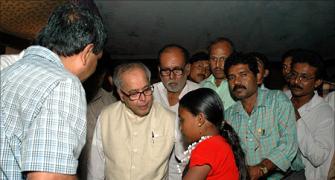 From FM to President: Pranab's successful innings
Virbhadra meets Sonia; will he quit?