Slamming the Congress over its stand on Article 370 and the Rafale deal, Prime Minister Narendra Modi on Tuesday accused its leaders of bad-mouthing India and showing negativity on matters that bring joy to the people of the country. 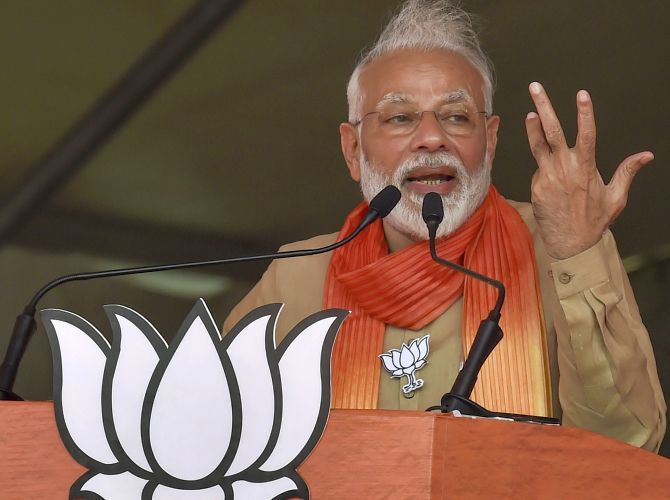 Addressing an election meeting in Charkhi Dadri ahead of the Haryana assembly polls, he charged that Congress leaders are spreading “rumours” in India and abroad over the abrogation of special status for Jammu and Kashmir under Article 370.

He urged people of Haryana to “punish” the Congress for this on October 21, the polling day.

At another rally at Thanesar near Kurukshetra, he said, “The situation is such that those behind spreading terror are targeting India by using their statements.”

“Elections come and go and but the interest of the nation is supreme,” he said.

The Bharatiya Janata Party recently slammed a meeting between the London unit of Indian Overseas Congress and Labour Party leader Jeremy Corbyn, in which the situation in Jammu and Kashmir after the nullification of Article 370 was discussed.

Modi asked people at the Thanesar rally whether they are happy with the induction of the French fighter jet, saying the move had strengthened the Indian armed forces.

“But I don't know what happens to Congress leaders. They get upset over matters that bring joy to countrymen,” he said.

“It is not restricted only to the Rafale jet issue. On every issue on which India gets respect and recognition, the attitude of Congress leaders always remains negative,” he added.

'Where is Beti Bachao, Beti Padhao'

A poll rally of the PM in Haryana's Thanesar witnessed a flutter when a person raised slogans questioning the Centre's "Beti Bachao, Beti Padhao" scheme and threw papers towards the dais when the PM was delivering his address.

"Where is Beti Bachao, Beti Padhao," the man shouted, triggering a commotion for about five minutes, before policemen caught hold of him.

The policemen in civil dress caught hold of the man from an enclosure close to the media block and took him away.

Many in the audience stood up from their chairs to watch what was going on.

The prime minister continued with his address.

From the papers he threw towards the dais, the man was identified as Ashok Kumar of Gulab Nagar in Jagadhri.

In a letter addressed to the prime minister, Kumar narrated a case where a Class 8 girl studying in a school in Yamunanagar was allegedly sexually harassed by a male teacher on August 26.

The principal of the school tried to hush up the matter, but when the girl's parents refused to budge, she was allegedly beaten up and casteist abuses were hurled at her, Kumar wrote in his letter to Modi.

He further alleged that when the matter was brought the notice of the police, they did not take any action and instead, lodged an FIR against the parents of the girl.

Despite dharnas against the police action, the FIR was yet to be withdrawn, Kumar alleged.

When contacted, superintendent of police Aastha Modi said the police were investigating the matter.

“India gets an award for Swachh Bharat Abhiyan, but they have problems. World leaders attend functions in India and give us awards. Even then they have sleepless nights and get upset over every issue,” he said.

Modi said national security, national interest and the Constitution are paramount for the Bharatiya Janata Party.

At the meetings, he also accused the previous Congress governments in the state and at the Centre of corruption, indirectly referring to opposition leaders who now face investigations or are in jail.

He dared the Congress again to openly declare that it will reverse his government's decision to nullify Article 370 if it is voted to power.

“Some leaders of the Congress have been spreading rumours about this decision in the country and in the world,” he said.

“You can abuse Modi as much as you can and even import abuses from Bangkok, Thailand, Vietnam or from wherever you want. I have no problem if you speak against Modi,” he said.

"But they should stop backstabbing India, which is on the path to progress,” he added, in a barb directed at the Congress.

The prime minister addressed two back-to-back meetings on his second visit to the state in two days.

Modi said the decision on J&K was taken in national interest and the whole country is standing with Jammu and Kashmir and Ladakh.

He asked people at the Charkhi Dadri rally if they supported the Congress on Article 370.

“Should they not be punished severely? Would you do that on October 21?” he asked, predicting that the BJP-run state would give the opposition party a “befitting reply”.

“In a few decades, 40,000 people have died in Jammu and Kashmir. A large number of them included our soldiers and several families from Haryana, whose brave sons laid down their lives for the security of the motherland,” he later said.

Maintaining that the M L Khattar government has provided a clean and transparent administration in Haryana, he claimed that the state was a “den of corruption” when the Congress was in power.

He said those who looted the country will land behind the bars.

In an apparent reference to opposition leaders, but without mentioning names, he said, “Their bigwigs have landed in Tihar Jail and are now crying. Rest assured that those who defrauded the country would not be spared,” he said.

The BJP candidate in Charkhi Dadri is wrestler Babita Phogat, whose struggle and that of her coach-father is featured in the hit film Dangal.

Modi said when he met President Xi Jinping at their informal summit recently, the Chinese leader told him that he had watched Dangal.

“He also told me that he saw in the movie what wonders daughters were capable of doing," the prime minister said.

He said the Centre's “Beti Bachao Beti Padhao” campaign for the girl child would not have been effective without the support of Haryana's villages.

“People in Haryana say mahree choree choron say kam hain kay (are our daughters any less than the sons),” he said.

“This voice has come from the villages of Haryana, and when this voice takes the shape of a campaign, the world is forced to say that daughters of India are ‘dhaakad',” Modi said in a reference to the movie.

Predicting a BJP victory in the assembly polls, he said there will be two Diwalis this time -- a kamal wali Diwali" (a reference to the BJP's poll symbol, lotus) and the other a "Diye wali Diwali" (festival of lights). 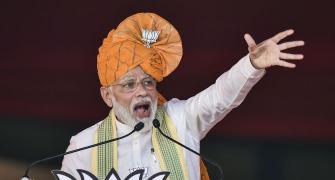 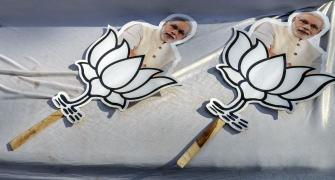 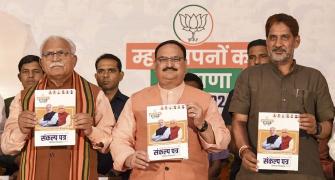 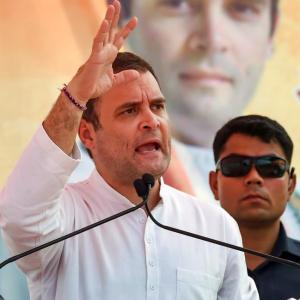