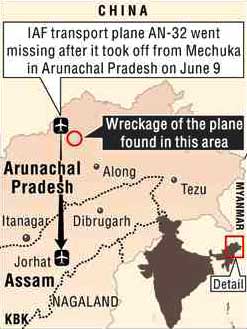 After a 24-hour search, security personnel on Wednesday found the wreckage of the Indian Air Force's transport aircraft that had crashed near a village in West Siang district of Arunachal Pradesh, and recovered the charred bodies of all the 13 defence personnel killed in the mishap.

The aircraft had crashed over the Rinchi Hill above Heyo village, about 30 km from Mechuka advance landing ground, in the district located about 60 km from the Indo-Chinese Line of Actual Control, state police and IAF officials said. Among the seven IAF men and six Army personnel on board the ill-fated aircraft were two wing commanders, two squadron leaders and a flight lieutenant.

"The IAF search team reached the air crash site and has recovered the bodies of the personnel, who were on board the aircraft," an IAF spokesperson said in New Delhi. The aircraft, belonging to a squadron in Jorhat in Assam, was on a routine sortie for air maintenance of troops and had landed in Mechuka on Tuesday morning.

It was on its way to Mohanbari airbase in Assam and had taken off from Mechuka at approximately 2 pm. But it soon went missing from the radar, the spokesperson said.

Body parts of crew-members were found strewn around the wreckage of the mangled aircraft, Additional Superintendent of Police H Lanin told PTI over the telephone from Aalo, headquarters of the West Siang district.

The IAF crew-members had been identified as Wing Commander G S Butalia, Wing Commander P Shaji, Squadron Leader P Siddharth, Squadron Leader Manas Mishra, Flight Lieutenant Varun Kumar, Master Warrant Officer Ramesh and Aircraftsman Sanjay Kumar, all of whom were from the Rowriah air base in Jorhat, the IAF spokesperson said. Identities of the six Army jawans were not available.

The spokesperson said the IAF would send a team of specialists to the spot to recover the Cockpit Voice Recorder and the Flight Data Recorder (also called the Black Box),

after which an inquiry would be conducted.

"We can confirm the reasons for the crash only after they are found", the spokesman said, not ruling out the possibility of a technical snag.

After waiting for the missing aircraft to report to the base, the IAF launched a search using a couple of its Mi-17 helicopters and carried it out till late Tuesday evening. But bad weather forced it to abandon the search till day light today.

A helicopter that had left on the search mission today afternoon finally spotted the wreckage, Wing Commander Ranjib Sahoo, defence spokesperson at the IAF's Eastern Command headquarters in Shillong, said. The aircraft was scheduled to reach Jorhat at about 1.30 pm on Tuesday, but it did not respond to the Air Traffic Control, Sahoo said.

The IAF inducted the medium-lift Ukrainian-made Antonov-32 transport aircraft into its fleet in 1984 and at present operates five squadrons of about 100 of these workhorses, mostly used for carrying Army troops and supplies for them in forward areas along the Line of Control with Pakistan and Line of Actual Control with China.

The last time an AN-32 crash occurred was in February 2000 at the Vijaynagar advanced landing ground in Arunachal Pradesh, while another crash was reported near Palam airport in Delhi in March 1999, killing 21 personnel on board.

In 1992, two An-32 aircraft had collided mid-air during formation flying. The aging fleet of AN-32s are currently scheduled for an upgrade programme, for which India is in talks with Russia. India also plans to replace the fleet with the multi-role transport aircraft that it is developing jointly with Russia.

IAF plane goes missing with 12 on board