World leaders congratulate Biden, 'look forward' to work with him

World leaders said they were looking forward to working with Joe Biden, as they welcomed the 46th President of the United States with praise and took parting shots at his predecessor Donald Trump. 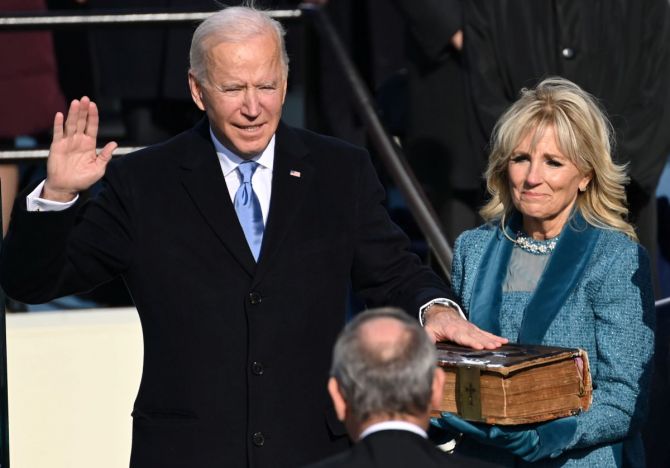 IMAGE: US President-elect Joe Biden is sworn in as the 46th US President. Photograph: Saul Loeb/Pool/Reuters

Biden on Wednesday vowed to repair America's alliances and engage with the world once again.

In his inaugural speech after being sworn in as the President in a historic but scaled down ceremony, the 78-year-old veteran Democratic leader said: "We'll be a strong and trusted partner for peace, progress and security."

"America has been tested and we've come out stronger for it. We will repair our alliances and engage with the world once again, not to meet yesterday's challenges but today's and tomorrow's challenges.

"We will lead not merely by the example of our power, by the power of our example. We'll be a strong and trusted partner for peace, progress, and security," Biden said.

Here is how the world leaders reacted to the inauguration of Biden and Kamala Harris as the Vice President:

Charles Michel, president of the European Council, tweeted congratulations to Biden and Harris, adding: "It's time to bring back conviction & common sense and rejuvenate our EU-US relationship."

"NATO Allies need to stand together to address the security consequences of the rise of China, the threat of terrorism, including in Afghanistan and Iraq, and a more assertive Russia," he said.

"At a time when the grave crises facing our human family call for far-sighted and united responses, I pray that your decisions will be guided by a concern for building a society marked by authentic justice and freedom," Pope Francis said.

Prime Narendra Modi tweeted: 'My warmest congratulations to Joe Biden on his assumption of office as President of the United States of America. I look forward to working with him to strengthen India-US strategic partnership.'

German Chancellor Angela Merkel also offered her 'warmest congratulations', adding that she looks forward to a 'new chapter' in Germany's relationship with the US, according to a tweet from her spokesman Steffen Seibert.

French President Emmanuel Macron marked the day with a tweet welcoming the US back into the Paris climate agreement.

"We are together. We will be stronger to face the challenges of our time. Stronger to build our future. Stronger to protect our planet. Welcome back to the Paris Agreement," Macron said.

'In our fight against Covid and across climate change, defence, security and in promoting and defending democracy, our goals are the same and our nations will work hand in hand to achieve them,' UK PM Boris Johnson said in a statement.

Russia said it hoped for a 'more constructive' relationship between the US and Moscow as Biden took office.

The Russian Foreign Ministry said in a statement on Wednesday that it wanted to extend the landmark Strategic Arms Reduction Treaty (New START) with the United States for a maximum stipulated five-year period, CNN reported.

Hours before the inauguration, Beijing expressed hope that Biden would 'look at China rationally and objectively' to repair 'serious damage' in bilateral ties caused by the Trump presidency.

"In the past four years, the US administration has made fundamental mistakes in its strategic perception of China ... interfering in China's internal affairs, suppressing and smearing China, and causing serious damage to China-US relations," foreign ministry spokeswoman Hua Chunying said.

"President Biden, you and I have had a warm personal friendship going back many decades. I look forward to working with you to further strengthen the US-Israel alliance, to continue expanding peace between Israel and the Arab world and to confront common challenges, chief among them the threat posed by Iran," Israel's Prime Minister Benjamin Netanyahu said.

Iran's President, Hassan Rouhani, called on Biden to return to the 2015 nuclear deal and lift US sanctions on Iran.

"The ball is in the US' court now. If Washington returns to Iran's 2015 nuclear deal, we will also fully respect our commitments under the pact," Rouhani said in a televised Cabinet meeting.

He also launched a scathing attack on Trump, saying a 'tyrant's era came to an end'.

"Someone for whom all of his four years bore no fruit other than injustice and corruption and causing problems for his own people and the world," he said.

Palestinian president Mahmud Abbas said he was 'impatient' to work together with Biden 'for peace and stability in the region and in the world'.

Canadian leader Justin Trudeau said he would work with the new US President 'to make our countries safer, more prosperous, and more resilient'.

'Our two countries are more than neighbours -- we are close friends, partners, and allies,' CNN quoted him as saying.

Japan's Prime Minister Yoshihide Suga tweeted his congratulations, adding 'I look forward to working with you and your team to reinforce our alliance and to realize a Free and Open Indo-Pacific'.

The leaders of Kuwait, Qatar, Bahrain, Saudi Arabia and the United Arab Emirates all sent messages of congratulations.

'I salute Joe Biden as the 46th President of the USA,' Bolsonaro wrote. 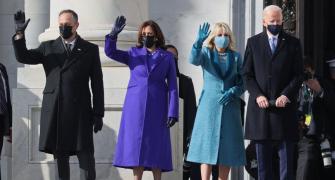 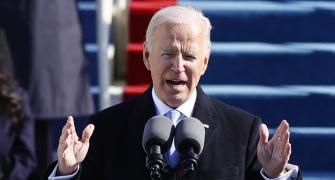 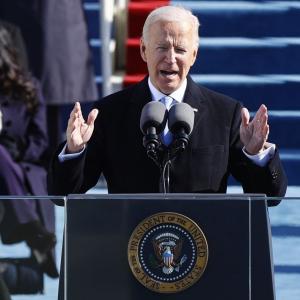 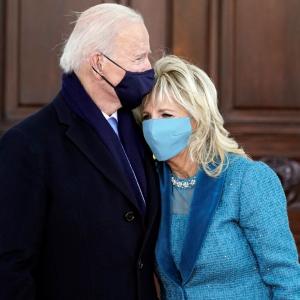