With the BJP backing off from the race, the onus to form government now rests with the Sena, which has indicated that it might rope in the Congress and the NCP to prop up a government. 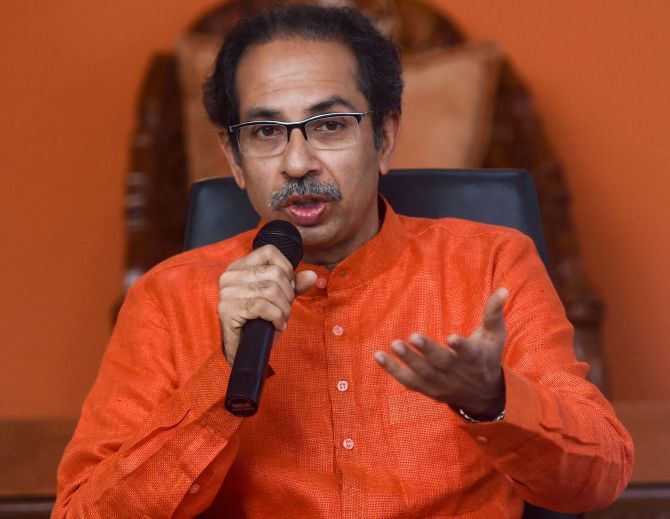 "The Sena will have to inform the governor about its stand by Monday (November 11) evening 7.30 pm," a Raj Bhavan official said.

The governor had on Saturday invited the BJP, the single largest party, to stake claim to form government.

However, with the BJP unable to muster numbers in view of the Sena's stand not to support it on the issue of sharing of power and the post of the chief minister, the party on Sunday declined to form government.

"The Governor has, therefore, asked the leader of elected members of the second largest party, Shiv Sena, Eknath Shinde, to convey its willingness and ability to form the government," the statement said.

With the BJP backing off from the race, the onus to form government now rests with the Sena, which has indicated that it might rope in the Congress and the Nationalist Congress Party to prop up a government.

The BJP on Sunday announced that it would not form government in Maharashtra in view of the ally Shiv Sena's stand to not join them in the efforts.

The Sena and the BJP have been locked in a bitter tussle over sharing of the post of the chief minister since the last 16 days when the results of the assembly polls were announced.

Chief Minister Devendra Fadnavis had rejected Thackeray's claims that BJP chief Amit Shah was agreed to his demand for a rotational chief ministership ahead of Lok Sabha polls.

The governor had on Saturday invited the BJP to "indicate the willingness and ability" to form government by virtue of it being the single largest party.

In fact, Patil wished "good luck" to the Sena to go ahead and form a government with the support of the Congress and the NCP.

"We contested together but the Sena does not want to come with us to form government. The mandate of the people of Maharashtra was for the BJP-Shiv Sena alliance. Sena has, however, disrespected the mandate, hence we have decided to not stake claim to form government. We have informed our decision to governor Bhagat Singh Koshyari," Patil told reporters outside Raj Bhavan.

"If the Sena wants to form the government with the help of the Congress and the NCP, we wish them good luck," he said.

The BJP's announcement capped the flurry of activity throughout the day which saw its core committee meeting twice to chart the political course amidst cold vibes from the Sena, which has been firm on the demand for the post of the chief minister.

Thackeray held discussions with newly-elected MLAs at a hotel in suburban Malad.

With the BJP backing off from the race, all eyes are now on the stand of the Congress and the NCP which collectively have 98 MLAs. 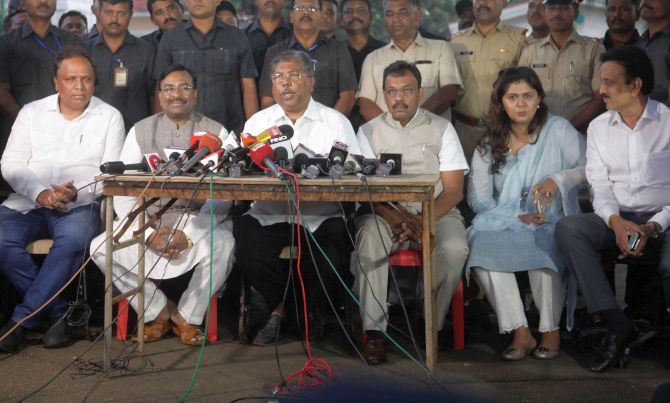 Reacting to BJP's refusal to form the government, senior Sena MP Sanjay Raut said the party will install its chief minister at any cost, indicating that the party was exploring options to form a government with the support of the Opposition.

"How will BJP have its chief minister when they are not staking a claim to form government?" he asked.

However, the crucial question is how will Sena muster the requisite number of MLAs if it wants to form government and install its CM.

Raut had earlier claimed the Sena had the support of 170 MLAs.

Sena MLA Pratap Sarnaik on Sunday said that governor might invite his party to stake claim to form government.

"We do not want president's rule in Maharashtra as there are several issues we want to resolve including the current plight of farmers. I think Maharashtra governor may invite us to stake claim for government formation," he said, adding that the final decision will be taken by Thackeray.

When asked about Raut's claim of having the support of 170 MLAs, Sarnaik refused comment.

Senior Congress leader Ashok Chavan said the party didn't want President's rule in Maharashtra, indicating that the party is in the game.

Newly-elected MLAs of Congress are currently staying in Jaipur.

"We are in Jaipur. We will discuss the issue here and will seek advice for the future political stand. The party doesn't want president's rule in the state," Chavan told reporters.

Chavan said he was in favour of forming a stable government in Maharashtra.

Another Congress leader Milind Deora said the governor should invite NCP-Congress alliance to form government, a proposal opposed by another leader Sanjay Nirupam.

The NCP led by Sharad Pawar seems to have adopted a wait-and-watch approach.

Reacting to the BJP's decision to not form the government, senior NCP leader Nawab Malik said the party will take a decision only after the Sena walks out of the NDA and gives a formal proposal seeking support to form a government.

"The Sena first needs to exit from the NDA in which it holds one Cabinet post in the Union government. Unless it leaves the NDA, we will wait and watch.

"We do not have enough numbers but we also don't want president's rule in Maharashtra. If the Sena comes with a proposal, there will be some conditions from our side on which Sena will have to agree on," he said.

On the Sena's demand for the post of chief minister, Malik said if the Sena needs support of the Congress and the NCP, it will have to clear is stand on sharing of power in Delhi.

"We have not decided yet whether to go ahead and support Sena to form government," he said, adding that a meeting of the NCP MLAs has been summoned on November 12. 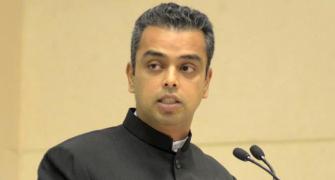 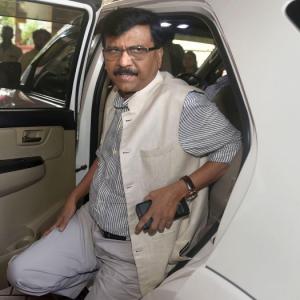 Sena will 'step in' if no one forms govt: Raut