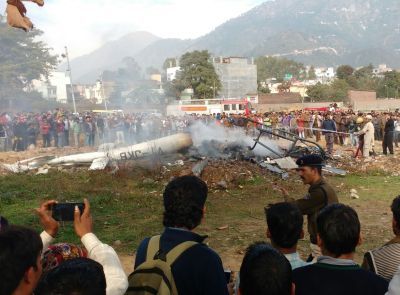 Seven people including the pilot and a newly-wed couple were killed when a chopper ferrying them back from the over 700-year-old Viashnodevi Shrine crashed in Katra after catching fire following a suspected bird hit, in the first fatal plane accident in this holy town.

Governor N N Vohra  said according to preliminary investigation, "a vulture had hit the chopper". He said DGCA has instituted an inquiry which will probe reasons for the crash.

Jammu and Kashmir Deputy Chief Minister Nirmal Singh, who rushed to the accident site, said,"As per initial information, a bird got caught in the tail rotor as a result of which it stopped functioning. Finding the area below populated, the woman pilot chose a safe landing area at the new bus stand to avoid casualties on the ground.

"As the plane was descending, its rotors got entwined in electrical wires and caught fire," he said.

Those killed included a newly wedded couple. The deceased have been identified as Pilot Sumita Vijayn from Hyderabad, Arjun Singh, Mahesh and Vandana from Jammu, Sachin, Akshita (5) and Aaryanjeet from Delhi.

He said arrangements are being made to send the bodies to Jammu and Delhi.

The Aircraft Accident Investigating Bureau is probing the accident and a two-member team has been sent to the accident site.

The shrine is located at a height of 5,300 feet on the Trikuta Hills. Katra town is 50 Kms away from Jammu. Nearly one crore visit the shrine every year, most of the trek the 13 km distance.

There are 100 two-way flights a day to Katara to a place near the shrine and back and about 1000 people use the chopper service daily. Two planes of the Himalayan Heli service and choppers of Global Victra operate on this route, Additional CEO of Shri Mata Vaishnodevi Shrine Board Ajit Kumar Sahu said.

He said the passengers have a 25 lakh insurance cover. In addition the Shrine Board has announced ex-gratia of Rs 3 lakh for each of those killed including the pilot.

"The next of kin of every passenger shall be given Rs 28 lakh," Sahu said while expressing condolence to the bereaved families.

A separate magisterial probe has been ordered by the J and K government into the accident. Reasi District Magistrate Sushma Chauhan will head the probe, the Deputy CM said after holding a meeting of top officials here.

Wanhchuk Shamshu, director of the Himalayan Heli service, ruled out bad weather being a cuse for the accident. "Today, the weather was fine and hence not an issue".

"It is upto the the regulatory authority to find out as to what exactly happened. Thereafter, if there are any misgivings on the part of the operator or anyone else, corrective measures will be taken," he said.

The two leaders also conveyed their condolences to the bereaved families.