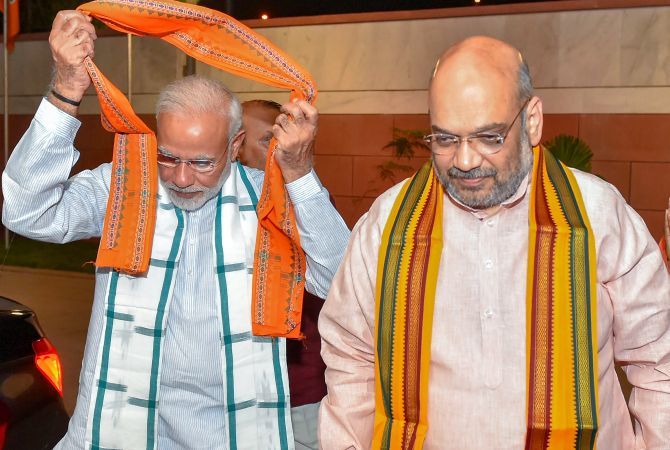 The Bharatiya Janata Party is eyeing to sweep the next month's Maharashtra assembly polls and is confident of a second term in office as the opposition Nationalist Congress Party and Congress in the state appear to be in disarray, say observers.

While the BJP and ally Shiv Sena are yet to announce the seat-sharing pact for the polls, scheduled on October 21, the Amit Shah-led party believes it will be back to power with a thumping majority.

The BJP top brass is repeatedly stressing that Chief Minister Devendra Fadnavis would helm the state once again, but the Shiv Sena wants to project party president Uddhav Thackeray's son Aaditya Thackeray for the top post in the event of the saffron alliance returning to power.

The Sena may agree to contest less seats if Aaditya Thackeray, who is likely to make his poll debut next month, is given the deputy chief minister's post, a party source said.

"A section of Sena leaders are, however, uncomfortable with this strategy," he added.

Making it clear that the abrogation of Article 370 would be the BJP's main poll plank in Maharashtra, Shah last week urged people to show the Congress and Nationalist Congress Party their place for 'opposing' the government's move in Jammu and Kashmir.

As part of a pre-poll mass outreach campaign, Fadnavis also recently toured 140 out of the total 288 assembly seats in the state through his 'Mahajanadesh Yatra'.

While NCP chief Sharad Pawar has also been touring the state, the Congress appears to be direction-less with there being no 'pan Maharashtra' leader.

Many senior leaders from both the parties joined the BJP and Sena in last few months, a political observer noted.

"There is no clarity about the Congress' vision and direction and transparency in candidate selection," he said.

The five working presidents appointed along with Balasaheb Thorat as state Congress chief have not been taken into confidence on seat-sharing with the NCP, a source said.

"All five working presidents and Thorat are contesting the upcoming polls and are unable to move out of their respective constituencies," he added.

The party is also criticism over Thorat not travelling across the state to campaign, amid rumours that former chief minister Ashok Chavan is calling the shots behind the curtain.

To add to the confusion, the Congress has appointed poll in-charges for the five regions (Vidarbha, Marathwada, Konkan, north Maharashtra and western Maharashtra).

"Most of them don't know what they are supposed to do," the source said.

But, the Congress is putting up a brave front and countering the BJP's move to highlight Article 370 scrapping, saying this election is about Maharashtra and not Kashmir.

However, Fadnavis has been blunting the opposition's point, saying what is the harm in speaking about national issues which concern the entire country.

"The Congress hasn't been able to counter the BJP, which is an expert in making an event out of everything, as to how the abrogation of Article 370 will help to wipe out terrorism in Jammu and Kashmir," the source said.

He said joblessness, slowdown in the economy and farm crisis need to be highlighted during the poll campaign which will gain momentum now.

The opposition NCP is also dealing with its own issues, including naming of 78-year-old Sharad Pawar in the Maharashtra State Co-operative (MSC) Bank scam.

The Maratha strongman's deft political move to go to the Enforcement Directorate's (ED) office on Friday to face questioning almost galvanised the party cadres, but the Maharashtra government acted swiftly in enforcing prohibitory orders around the probing agency's office in Mumbai.

Mumbai Police Commissioner Sanjay Barve also persuaded Pawar against going to the ED office since it could lead to law and order problems.

Observers feel the slight political point scored by Pawar senior was short-lived as the same day his nephew Ajit Pawar, who is one of the 70 people named in the scam, stunned the NCP by quitting as an MLA.

The former state deputy chief minister on Saturday said he resigned as MLA as he was pained after his uncle's name got embroiled in the MSC Bank scam for no reason.

However, there have been speculations that all is not well in the Pawar family since the Lok Sabha polls when the party chief initially opposed the candidature of his nephew's son Parth Pawar, but later relented.

At the same time, his another grand nephew Rohit Pawar (son of Ajit Pawar's cousin) is being encouraged in the party and is likely to contest the state polls next month.

Apart from these four parties, the Prakash Ambedkar-led Vanchit Bahujan Agadhi (VBA), which dented Congress' winning prospects in some seats during the Lok Sabha polls this year, has decided to contest all 288 assembly seats in the state and refused to join the Congress-NCP alliance.

With the All India Majlis-e-Ittehad-ul-Muslimeen (AIMIM) calling off its alliance with VBA for the state polls, political observers say it would be interesting to see if the development benefits the Congress and NCP. 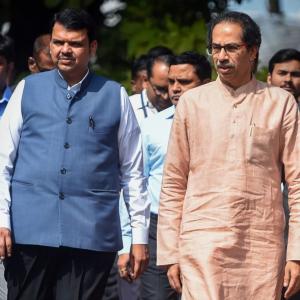 Sena-BJP yet to seal pact for Maharashtra polls 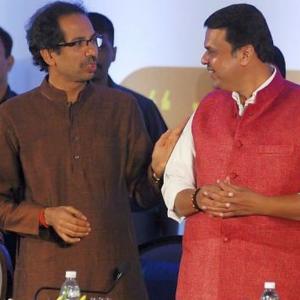