'A loss of seats for the Trinamool in this election will weaken its hold in Bengal, which will not augur well before the assembly election in 2021.'
Ishita Ayan Dutt reports from Kolkata. 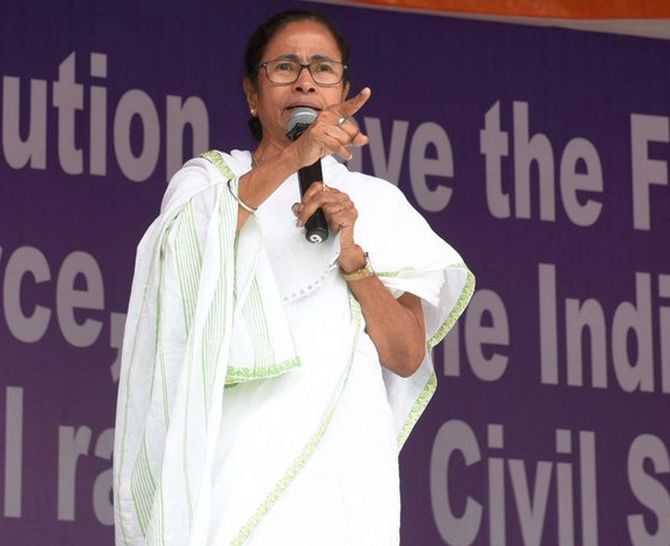 The petite frame of Trinamool Congress chief Mamata Banerjee belies the warrior within as she paces up and down the makeshift platform at campaign rallies likening her challenger Narendra Damodardas Modi to Adolf Hitler and labelling him a seasonal bird.

Hours after the prime minister addressed an election meeting in Cooch Behar, Banerjee referred to him as a 'seasonal bird' for visiting north Bengal only ahead of elections at a rally in the same Lok Sabha constituency.

'You had not come to Darjeeling during the days of unrest. Where were the BJP leaders when there were disturbances in the hills,' she asked?

The pitch only got sharper with the approach of elections.

At the heart of her campaign is a conscious effort to project an alternative to the current government.

Political commentator Sabyasachi Basu Ray Chaudhury says, the anti-BJP, particularly the anti-Modi campaign, has gotten a leg-up in the current election. 'The rhetoric, diatribe and the manifesto are all targeted at the BJP.'

The TMC campaign is focused on highlighting how the parameters on which the Modi government has faltered while projecting the achievements of the Bengal government.

In sync with the larger theme, the TMC has launched a Web series Pradhan Mantri Hisab Do that seeks to highlight the ease and the lack of it between state and central schemes.

And there is also a 'Jumla Meter' on the Web site, which according to the Trinamool Congress, provides facts as soon as a claim is made by Modi or Amit Anilchandra Shah in their speeches.

Not just in the run-up to the election, Banerjee has kept national issues simmering since demonetisation.

She led a rainbow delegation of Opposition leaders to the Rashtrapati Bhavan, held rallies in Delhi with Chief Minister Arvind Kejriwal in tow, created a photo opportunity in Uttar Pradesh with then chief minister Akhilesh Yadav receiving Banerjee at the airport in her campaign against demonetisation, and quickly became the face of the anti-demonetisation campaign.

Political observers and bureaucrats say, it is also a way to protect her own turf, which is now polarised.

In the panchayat elections of 2018, the BJP, now seen as the only anti-TMC front, finished second.

"A loss of seats for the Trinamool in this election will weaken its hold in Bengal, which will not augur well before the assembly election in 2021, even though it's some time away. Also, it will diminish its chances of playing kingmaker at the Centre in the event of an opportunity," observers pointed out.

An attack on the BJP would therefore inevitably revolve around the central government.

Banerjee found her ammunition in the CBI fiasco that erupted or when the RBI-government tussle made headlines.

Her speeches are often peppered with references on institutions such as the CBI and the RBI being muzzled. 'From RBI to CBI, everyone is saying bye-bye,' is one of her favourite one-liners.

Whether she has an eye on the top job is not clear, but Banerjee believes that she will have a decisive say in the formation of the next government.

And if she does, the road map ahead is chalked out in the manifesto: Jobs, education, women empowerment, political, economic, judicial reforms, et al.