Hoping to give a hero's welcome to Wing Commander Varthaman, thousands of Indians gathered on the border carrying the tricolour and garlands since morning.

But as the day wore on and night fell there was no sign of the pilot, who was captured on February 27 by Pakistan following a dogfight between the two air forces in which his MIG-21 was shot down.

He finally emerged at 9.10 pm (IST) at the Wagah checkpost on the Pakistani side, accompanied by Pakistani rangers, the Indian air attache posted in the High Commission in Islamabad.

He was wearing a civilian clothes -- a dark jacket and khaki trousers, walking proudly toward the gates that separated his captors' country from his homeland.

Amritsar's Deputy Commissioner Shiv Dular Singh Dhillon told reporters that the fighter pilot was happy to be back in his country.

Asked what Abhinandan told officials upon his return, the DC said he first smiled and remarked, "I am happy to be back to my country."

Giving further details, the DC said, "The Pakistan authorities brought Wing Commander Abhinandan to the Joint Check Post at Attari and he crossed over the Zero Line at around 9.21 pm (IST). After going through some formalities at the Wagah-Attari border, he was handed over to the BSF authorities.

"Later, the IAF authorities took him with them." An official was seen putting his arms around the pilot while receiving him.

The Wing Commander was then driven away from the Attari border towards Amritsar in an Air Force vehicle which was escorted by Punjab police.

The Deputy Commissioner said the officer's parents were not present at the checkpost.

Wg Cdr Varthaman is being flown to Delhi and will undergo debriefing on Saturday which will include his physiological as well as a physical check-up in the presence of officials from the military and Intelligence agencies. Prime Minister Narendra Modi welcomed the return of Varthaman, saying the nation is proud of his exemplary courage.

'Welcome Home Wing Commander Abhinandan! The nation is proud of your exemplary courage. Our armed forces are an inspiration for 130 crore Indians,' tweeted Modi.

Air Vice Marshal R G K Kapoor read out a brief statement before a large posse of reporters in Attari, near Amritstar, on the other side of Wagah.

"Wing Commander Abhinandan has just been handed over to us. He will be taken now for a detailed medical checkup.

"This check up is mandatory as he had to eject from an airplane which would have put his entire body under stress," said Air Vice Marshal Kapoor, who did not take any questions.

The handing over of Wg Cdr Varthaman to India at Wagah was delayed as he was asked to record a statement on camera by Pakistani authorities before he was allowed to cross the border, according to sources in Pakistan. At 8.30 pm (9 pm IST), the Pakistan government released the pilot's video message to the local media in which he said as to how he was captured.

"Recording of his video message caused delay in his handing over," a source said.

It was not clear whether he was made to record the video under duress. The video also had several jump cuts indicating that it had been edited heavily, apparently to fit Pakistani propaganda.

In the video message, Varthaman said he entered Pakistan's space to 'find a target' but his aircraft was shot down.

"I was in search of the target when your (Pakistan) Air Force shot me down. I had to eject the plane which had sustained damage. As soon as I ejected and when my parachute opened and I fell down, I had a pistol with me.

"There were many people. I had only one way to save myself: I dropped my pistol and tried to run.

"People chased me, their emotions were running high. Just then, two Pakistani Army officials came and saved me. Pakistani army captains saved from the people and did not let any harm come to me.

"They took me to their unit where I was administered first aid and then I was taken to the hospital where I further underwent a medical exam and received more aid," he said. "The army personnel saved me from the mob. The Pakistani army is very professional and I am impressed by it," Wg Cdr Varthaman said, while criticising the Indian media.

Although there has been no official word as to what time he was brought to the Wagah border on Friday, but the sources say he reached Lahore after 4 pm.

The Pakistani media reported that 'his papers were being checked at the Wagah immigration' that was why he was not being 'immediately' handed over to the Indian authorities.

Amid mounting outrage, Indian Air Force carried out a counter-terror operation, hitting what it said was JeM training camp in Balakot, deep inside Pakistan on February 26. The next day, Pakistan retaliated with a large air formation, comprising 24 fighter jets, including F-16s.

Wg Cdr Varthaman was in one of the eight MIG-21s that took on the invader and shot down an F-16, according to officials. During the dogfight, his plane was hit and he bailed out, landing in PoK, where he was taken into custody by the Pakistani army.

On Thursday, Pakistan Prime Minister Imran Khan told a special joint sitting of Parliament that his government was releasing the pilot as a 'peace gesture'.

However, India has been maintaining that the Pakistani decision is in consonance with the Geneva Conventions.

After the pilot's release, the Pakistan Foreign Office described him as a Prisoner of War.

In a statement issued minutes after the pilot crossed over to India from the Wagah-Attari border, the FO said, 'While in captivity, he was treated with dignity and in line with international law.'

The Pakistan government was under tremendous international pressure to de-escalate the tensions with India and release the captured pilot.

As analysts painstakingly debated each nuance of India-Pakistan relations in TV studios, anchors went hoarse keeping up the constant commentary, and journalists looked for information on when and how he would be handed over to India.

The government decided to keep it all under wraps.

Patriotism was the mood of the day.

There was garba in Ahmedabad, dancing in Bengaluru, a sand sculpture of the officer in Puri and 'yagnas' in several places.

'Pak had no choice' 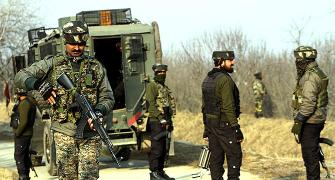 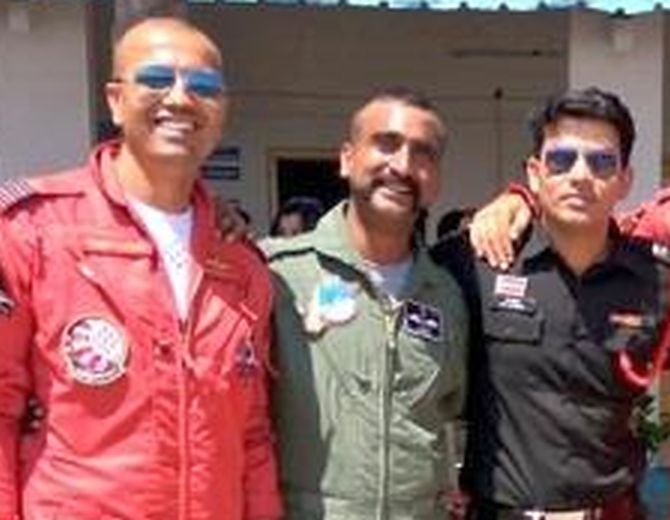