News
Business
Movies
Sports
Cricket
Get Ahead
Money Tips
Shopping
Sign in  |  Create a Rediffmail account
Rediff.com  » News » Will the GST bill be signed next week?

Will the GST bill be signed next week? 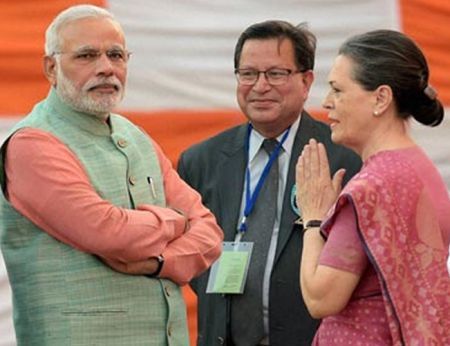 The Congress is expected to accommodate argument that the GST rate cannot be stipulated within constitution amendment itself, reports Archis Mohan & Kavita Chowdhury

Prime Minister Narendra Modi on Friday said it was a good sign that Parliament was functioning, and the credit for this went to all political parties. But two successive days of Rajya Sabha disruptions over statements by Union ministers while Bharatiya Janata Party keeping up its attack on “corrupt” Congress chief ministers might spell trouble for the Goods and Services Tax Constitution amendment Bill.

However, both camps sounded positive and hopeful of negotiating on the GST bill once Parliament convenes on Monday. The winter session on Friday completed a gruelling seven days of the rather short 20-day session. Both, the government and the Congress party, now await the return of Congress president Sonia Gandhi on Sunday before sitting down again for negotiations on GST. Congress sources said party vice-president Rahul Gandhi would help his mother take a decision on the issue. They said Rahul does not wish to be seen as “obstructionist” but is in “no hurry” to ensure the passage of the bill.

Senior leaders within the Congress now say the party could accommodate the government’s argument that the GST rate cannot be stipulated within the Constitution amendment itself but will be part of the main GST bill. The government is all set to accept the Congress demand of doing away with one per cent tax on inter-state commerce of goods. While senior leaders in the party and among its Rajya Sabha senior MPs favour negotiations, there are also those who have advocated a more nuanced approach. It will become clearer next week as to which view prevails and that would decide whether GST is passed in this session or not.

A minister said the Opposition, particularly the Congress, has had a field day in the first week of the session, and will do so in the second week as well. The government hopes that the opposition parties will return the favour with facilitating the passage of the GST in the third week. After disruptions of the last two days over Union minister VK Singh’s remarks purportedly about Dalits and ministers disputing Congress MP Kumari Selja’s claim that she faced discrimination in a temple in Gujarat, the Rajya Sabha will take up the discussion on ‘intolerance’ next week and possibly even one on price rise.

Meanwhile, the BJP has kept up its pressure on the Congress by raking up the alleged corruption cases against Congress chief ministers. Union minister Nirmala Sitharaman said she would not “imagine” that the attack on the Congress would have a bearing on its stand on the bill. She hoped the Congress would handle the criticism “maturely”. The Congress has largely chosen not to react to the BJP attack. As a seasoned Congress party hand said, the call on the GST is “more political than economic”.