News
Business
Movies
Sports
Cricket
Get Ahead
Money Tips
Shopping
Sign in  |  Create a Rediffmail account
Rediff.com  » News » Will someone take note of the nowhere people?

Will someone take note of the nowhere people?

Over 51,000 people live in enclaves along the border of India and Bangladesh. With no identity of their own and the lack of basic amenities, they are staring down the barrel with both countries virtually forgetting their existence. Syed Tashfin Chowdhury reports

Imagine a pregnant mother, who is expected to be in constant touch with a doctor, just so that she can be rushed to a nearby hospital or clinic for delivery when needed.

Take the case of a youth, who quite likely is receiving an education at a school, university or college.

However, instances of unachieved dreams galore amidst over 51,000 people living in the 111 Indian enclaves in Bangladesh and 51 Bangladeshi enclaves in India, alongside the 4,000-kilometer long border that the two countries share.

The enclaves have no utilities like electricity, water supply or sewerage. There are also no schools or colleges. The youth of the enclaves have to walk or pedal to the nearby villages to attend classes.

Also unavailable are hospitals or community clinics. Patients often have to travel for miles out of their enclaves to a hospital. But once at the hospital, they cannot even utter that they are from the enclaves for the mere mention will ensure that services are refused or inadequately provided.

Hossain, a resident of Dashiarchhara Indian enclave inside Bangladesh and near Kurigram district, explained, "The registry offices near the enclaves were closed down in 2005. We also have no bridges, no streets, no schools or colleges. We also have no utilities."

"We cannot even travel to any country, as we have no passports," Mizanur Rahman, joint secretary of Dashiarchhara unit of IBEECC told rediff.com.

Since the last 65 years, the enclaves' people have seen government efforts failing to materialise their hopes to have the rights of a free nation.

They have been demanding that the Indian enclaves inside Bangladesh can be absorbed into Bangladesh and vice versa, thus providing nationalities to them.

Following their long-standing demand, India and Bangladesh carried a joint headcount in the 162 enclaves in July 2011.

A headcount revealed that 37,369 people lived in the Indian enclaves while 14,090 resided across the border.

Following the census, the landlocked people hoped that the countries would reach a final decision during the Indian premier Manmohan Singh's visit to Bangladesh in September last year.

Much to their disappointment, the two neighbours only signed a protocol of the 1974 land boundary agreement, among others, regarding enclaves and other land boundary issues without any definite timeframe.

The 1974 agreement between then Bangladesh premier Sheikh Mujibur Rahman and his Indian counterpart Indira Gandhi stipulated that the Indian enclaves in Bangladesh and vice versa should be exchanged "expeditiously" without claim to compensation for the additional area going to Bangladesh.

Although the Bangladesh government ratified the agreement on November 27, 1974 in parliament, the Indian government could not do so.

Unsatisfied with the uncertain protocol signed last year, the IBEECC has been observing several protests since last year.

"The latest was this April when both the Bangladesh and India chapters observed a fast unto death protest programme among others to press home our demands," said Diptiman Sengupta, general secretary, India chapter of the IBEECC.

"While the Bangladesh chapter managed to observe the programme for 24 days, we continued it for 28 days," he informed.

"A representative of Bangladesh Prime minister Sheikh Hasina came to us and broke our fasts, assuring that efforts are on to ensure the exchange of the enclaves," said Altaf Hossain.

Recent reports by some dailies that the exchange of enclaves and adversely possessed lands between the two countries could be delayed as India needed a constitutional amendment for implementation of the agreement signed last year, has done little to raise the hopes of these people to have a national identity.

The people of the enclaves are looking forward to the upcoming monsoon session of the Indian parliament.

"We have been informed that a draft bill has been prepared, which needs to be placed in Parliament and then conceded upon for our dreams to come true," said Hossain.

The Financial Express in Bangladesh quoted a senior foreign ministry official of Bangladesh as saying, "An amendment to the Indian constitution is being drafted to authorise the administration to exchange all the 162 enclaves".

The Bangladeshi daily reported that although the Indian government has prepared a bill for constitutional amendment in this regard, winning the approval from a required two-third majority in the lower house may be difficult, where the ruling coalition currently has only simple majority.

"If the exchange is not implemented following the placement of the bill at the Indian parliament, it would signify that the governments, who have signed the deal, have really betrayed the people. What is then the purpose behind signing an agreement, when a government cannot even ratify it," asked Sengupta. 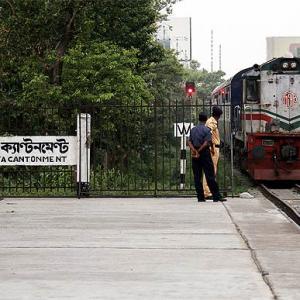 PIX: India has BIG PLANS for the Friendship Express