Terming the Right to Education Act as an "attack" on the sovereignty of madarsas and other minority institutions, Islamic seminary Darul Uloom Deoband on Thursday said it will oppose it.

"The seminary will strongly protest the move to snatch rights of madarsas through RTE and it is with the All India Muslim Personal Law Board, which is already opposing it," newly-appointed vice-chancellor Maulana Abul Qasim Nomani told mediapersons.

He said the Act poses a threat to the independence of madarsas and their education system. "If minority institutions are not excluded from the Act then Deoband will lodge its protest whether on its own or under the banner of the AIMPLB," Nomani said.

He said during a programme organised by Jamiat Ulama-e-Hind in Delhi an year back when apprehension were raised in this regard, Union Human Resource Minister Kapil Sibal had assured them that such educational institutions would be kept out of the ambit of the act.

The AIMPLB held a meeting to protest against RTE on last Sunday in which it was decided that if the Centre does not exclude madarsas and other minority institutions from the ambit of the Act then a nation-wide agitation would be launched after the month of Ramzan.

Member of the Board Zafaryab Jilani said that last year in April the Centre issued an order regarding RTE after which the Uttar Pradesh government also issued an order in this regard on May 19 last.

He alleged that notices were being issued to madarsas directing them to change their system in accordance with the law. As per the law, if madarsas and schools do not follow the rules and regulations within three years then there is a provision of imposing penalty and shutting them down, Jilani said.

He said that as per the Constitution, minority community can either teach their education curriculum or make required changes as per the curriculum fixed by the government.

"But under section eight and nine of the RTE this power has been given to the Centre and local bodies," he said.

He alleged that under the law, right of the minority unit setting up the school to appoint a member of the community in the management committee has beenwithdrawn.

Besides power to fix education qualification of the teachers has also been given to an authority set up by the Centre, the AIMPLB member said. He said that it would badly affect the system of imparting religious education.

Abhishek Bajpai in Lucknow
Source: PTI© Copyright 2021 PTI. All rights reserved. Republication or redistribution of PTI content, including by framing or similar means, is expressly prohibited without the prior written consent.
Related News: All India Muslim Personal Law Board, RTE, AIMPLB, Jilani, Darul Uloom Deoband
SHARE THIS STORY
Print this article
Deoband and the machinations of the mullahs
View: Dirty politics in Deoband 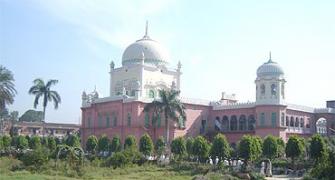 What the Deoband controversy is all about