Will Modi ever be held accountable for 2002 Gujarat riots, asks Congress

The Congress on Monday termed as "deeply disappointing" the Supreme Court ruling upholding the SIT's clean chit to then Gujarat chief minister Narendra Modi and 63 others in the 2002 communal riots, and asked whether Modi and the state government will ever be held accountable. The opposition party said it stands by party leader, the late Ehsan Jafri, and his family and asserted that what happened to him in a most tragic manner was the result of a "fundamental lapse on the part of the state government".

Ehsan Jafri, a former Congress member of Parliament, was among the 68 people killed at Ahmedabad's Gulberg Society during the violence on February 28, 2002, a day after the Godhra train burning that claimed 59 lives.

The Congress's detailed reaction to the Supreme Court ruling came after the Supreme Court on Friday upheld the SIT's clean chit to Modi and 63 others in the 2002 communal riots in the state, saying there is no "title of material" to show the violence after the Godhra train carnage was "pre-planned" owing to the criminal conspiracy allegedly hatched at the "highest level" in the state.

The top court dismissed a plea by Jafri's wife Zakia, terming it as "devoid of merits".

In a statement on the apex court ruling, Congress general secretary Jairam Ramesh said the Supreme Court judgment in the Zakia Jafri case is "deeply disappointing".

"What is the constitutional and moral responsibility of the chief minister and the state government in cases of large-scale communal riots," Ramesh said.

"Is the responsibility in such cases only ever that of the collector and deputy commissioner of police and not of political executive? Will the chief minister, cabinet and state government never be held accountable, even if a state is thrown into a circle of violence & riots?" he said.

While the Supreme Court has pronounced its judgment, there are five questions that will continue to haunt Prime Minister Modi, including was he not the Gujarat chief Minister when the horrific riots took place in 2002, Ramesh said.

"Why was PM Vajpayee so affected by his lack of action that he had to publicly remind him to do his duty, to follow his ’rajdharma'?" Ramesh said.

Was it not the Supreme Court which called out the conduct of the Modi Government in Gujarat as that of "modern day Nero's (who) were looking elsewhere when ...innocent children and helpless women were burning, and were probably deliberating how the perpetrators of the crime can be saved or protected,” the Congress leader asked.

''Why did sections of the BJP, including now member of the Modi Cabinet Smriti Irani, protest and call for his dismissal as CM if he was not guilty of any wrongdoing," Ramesh asked.

"What about all the numerous convictions that have been carried out on the basis of the evidence collected by the SIT relating to the Gujarat riots? Can the BJP claim that those also stand invalidated?" he said.

Ramesh asserted that no amount of "propaganda'' by the BJP can ever erase these facts.

The riots that the Godhra carnage triggered killed 1,044 people, mostly Muslims. The central government had informed the Rajya Sabha in May 2005 that 254 Hindus and 790 Muslims were killed in the post-Godhra riots.

Bringing the curtains down on the bid to reopen the probe into the 2002 riots, a bench headed by Justice A M Khanwilkar also spoke of ”the devious stratagem to keep the pot boiling, obviously, for ulterior design”.

It said disgruntled officers of the Gujarat government need to be in the dock and proceeded against in accordance with law for creating a sensation by making false revelations. 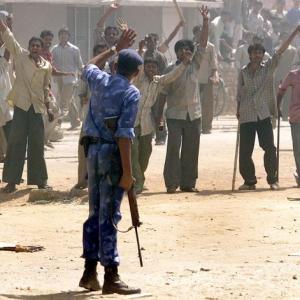