The call from the chief minister, who is currently camping in New Delhi, to the PRP president indicated that the high command was in no mood to be accommodative towards Jagan and his loyalist legislators in the constitution of the state Cabinet.

Kiran Kumar reportedly discussed the cabinet formation during the telephonic conversation with Chiranjeevi. Though PRP sources were tightlipped about the discussion the chief minister had with their president, Chiranjeevi immediately took up the issue with his senior colleagues.

Chiranjeevi is expected to meet Kiran in Hyderabad on Monday afternoon to carry their discussion forward.

Late on Saturday night, the chief minister asserted in New Delhi that 'only Congress' legislators would be part of his council of ministers, brushing aside speculation that the PRP would also be offered cabinet berths.

Even after finalising his cabinet list, after hectic parleys with Congress leaders, including Sonia Gandhi, on Sunday night, Kiran did not reveal anything about the possible inclusion of PRP in the cabinet.

Earlier in the day, even Chiranjeevi pleaded ignorance about any move by his party to join the Congress government.

Kiran, however, called Chiranjeevi and reportedly told him that he will discuss other issues after returning to Hyderabad on Monday. This fuelled fresh talk about the PRP being taken into the Cabinet in the first round itself, rather than in the subsequent expansion. If this happens, Jagan will lose no time in making his exit from the Congress, according to political observers. 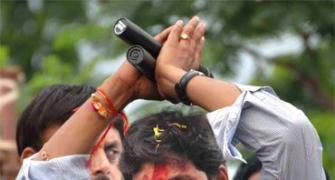 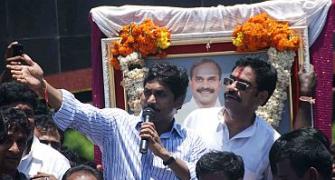 Thousands turn up to show support for Jagan
The whole issue is like match-fixing, says Naidu 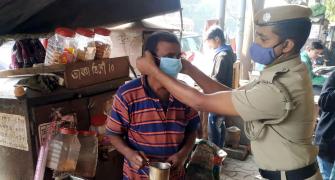 Reddy's appointment a slap in the face for Jagan