AFSPA has eclipsed all other achievements of the Biren Singh government. 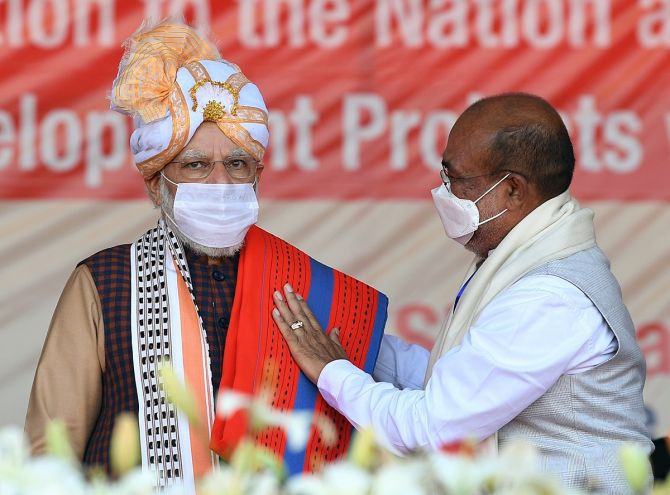 The recent events in the North East are going to have a profound effect on the electoral outcome in Manipur, where assembly elections will take place in two phases on February 27 and on March 3.

The counting of votes will be held on March 10.

The ruling Bharatiya Janata Party, which ended the 15-year rule of the Congress and assumed power after the 2017 elections following defections from the Congress and support of the National People's Party, is expected to summon the cabinet to pass a resolution, demanding the repeal of the Armed Forces Special Powers Act.

In Manipur, during the rule of the Congress-led government in 2004, AFSPA was lifted from seven assembly constituencies in the state.

On December 1, 2019, the Manipur government extended the 'disturbed area' status in the entire state, with the exception of Imphal municipal areas, for another year.

Promulgation of the 'disturbed area' status creates the ground for the enforcement of the Act.

In February last year, the BJP government, led by N Biren Singh, said the chief minister would lobby the central government to remove this almost permanent threat to civil liberties as the law and order situation in Manipur 'was peaceful and well under control.'

Now, he is under pressure to make good his promise after the December 4 incident in Nagaland's Mon, where 14 people were killed.

Eight others, including an Indian Army soldier, were killed in subsequent clashes between the forces and the villagers.

The Indian Army has since conceded it was a mistake, but all the north eastern states are up in arms.

The Act and demand for its removal have become a big election issue in poll-bound Manipur.

The Congress has already said that if it returns to power in 2022, the first meeting of the cabinet will decide on the immediate and complete removal of AFSPA from the entire state of Manipur.

It is another matter that the Congress's fortunes in the hill state are on a downward trajectory.

However, what makes things politically perilous for the BJP is that its most important electoral ally, the NPP, headed by Conrad Sangma, chief minister of neighbouring Meghalaya, has also said it will campaign across the state for scrapping AFSPA.

Naturally, the Union home ministry and the central BJP leadership have not commented on the AFSPA, even as the party has stepped up campaigning in the state.

What the BJP must find especially galling is that AFSPA has eclipsed all other achievements of the Biren Singh government.

Statistics from the good governance index, evolved by the department of personnel and training as a way to compile the development data from states and create rankings on a variety of indices to foster competition among states on good governance, reveal that under several heads, Manipur has improved its 2019 ranking in 2020-2021.

Horticulture production is showing a declining trend all over the region -- except in Manipur.

The BJP's growth and development in Manipur have been largely at the expense of the Congress.

Although the Congress emerged as the single largest party with 28 seats after the 2017 elections, the BJP formed the government with support from a group of 'friendly' parties, including the NPP.

Exits from the Congress continued.

The most notable was state party chief Govindas Konthoujam, a former minister and six-time Congress MLA from Bishnupur, who crossed the floor in August and joined the BJP.

However, relations between the BJP and its ally the NPP have not been cordial either.

Of the four NPP ministers in the government, two were dropped in the last year.

Sangma, who is both ambitious and young, is seen as an important upcoming leader in the North East.

His party is an important member of the North East Democratic Alliance, a non-Congress political platform floated by the BJP after winning the Assam elections in 2016.

His party has already announced it will contest 40 seats out of 60 from Manipur in the assembly elections. This could make him an important kingmaker if the BJP and the Congress are tied.

The Manipur election outcome will show if the BJP has really put down firm roots in the state. It will also test the permanence of regional outfits like the NPP. AFSPA unlikely to be withdrawn from Manipur soon