Will Baabul Supriyo be I&B minister?

'Mamata's arrogance did her in.' The buzz is that singer-actor Baabul Supriyo, minister of state for heavy industries and public enterprises in the first Modi government, may be appointed information and broadcasting minister.

"I will do whatever Modiji asks me to. I am his loyal soldier. So if he asks me to take charge of I&B, I'd happily do so," he tells Subhash K Jha.

Says Baabul, "It is a far bigger margin than my victory during the last Lok Sabha election."

"It was only expected. Moon Moon Sen was a bit of a joke," he says. "She made some awful statements that exposed her ignorance."

"My track record spoke for itself. I remained steadfast in my determination to achieve a clean victory."

"When my car was attacked in Asansol I could have lost my life," he adds, "But I never allowed the game to get dirty."

"The maximum I did was to compose a satirical song on Mamtadi's party. Even that angered her. I'd say her arrogance did her (Trinamool Congress supremo Mamata Banerjee) in." 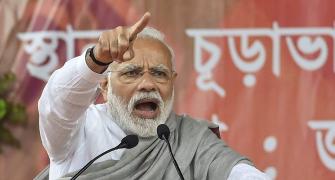