Will abide by SC order on temple wealth: Kerala CM

Kerala Chief Minister Oomen Chandy on Wednesday said his government would go by the verdict of the Supreme Court on the wealth of Sri Padmanabha Swamy temple in Thiruvananthapuram.

"We want to keep the wealth within the temple. We will give full security to protect it," Chandy told reporters at the Hyderabad Press Club.

"Whatever has to be done will be done as per the Supreme Court orders," he said when asked if the wealth would be kept in a museum. The wealth belonged to the temple, he asserted, adding that the credibility of the Thiruvananthapuram royal family was also "very high".

Replying to a question, Chandy said he did not agree with Communist Party of India (Marxist) leader Pinarayi Vijayan's views on the issue.

On Bharatiya Janata Party's efforts to project Gujarat Chief Minister Narendra Modi as the next prime minister, the Kerala Chief Minister remarked, "I am not a national leader...But I can say that Congress is the only party that can deliver and keep the country united."

On his government's efforts to curb micro-finance institutions in the state, Chandy said a new law might be enacted to curb the illegal activities of the financiers.

Responding to a query on the termination of Kochi Tuskers Kerala team's contract with Indian Premier League, the chief minister noted: "We want Kochi in the IPL but they (BCCI) have their own rules and limitations." 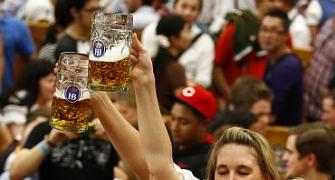