News
Business
Movies
Sports
Cricket
Get Ahead
Money Tips
Shopping
Sign in  |  Create a Rediffmail account
Rediff.com  » News » Why the Congress needs to buckle up

Why the Congress needs to buckle up

In a decision that will come as a breath of fresh air to a large number of embattled Congressmen, the party leadership in a change of strategy has decided to play aggressive and defend party leaders charged with graft rather than sacrifice them one after the other as was happening till now.

The party leadership blinked after the arrest of Suresh Kalmadi, who has now been sent to Tihar jail. Congressmen were visibly and vocally upset at his arrest, and sources say this was conveyed to the Congress President.

She was also told by leaders that if the situation continued as it was, many more heads may have to roll, with an aggressive BJP pushing the Congress to the wall, and a defensive prime minister wanting to appear as picture postcard squeaky clean.

This was despite the fact he ensured that senior officials of the Prime Minister's Office escaped interrogation in the Public Accounts Committee on the 2G Spectrum scam.

A senior leader said that if too many ministers and chief ministers were dropped on charges of corruption, it would only benefit the BJP, which is already projecting the Congress as well as its allies in the UPA as one of the most corrupt governments ever to have existed.

"The aggressive and no-holds barred attitude of the Supreme Court has certainly helped neither the government nor the party," said a Congress leader, but more than that it was the defensive posture of the leadership which worsened the situation for the Congress-led UPA.

In hindsight, many Congress insiders now admit that the strategy was faulty from the beginning and the decision to cave in even before opposition demands for resignations reached fever point was bad strategy and gave the opposition a huge handle with which to crush the congress on corruption.

They admit that Ashok Chavan's resignation was ill-timed and gave the opposition a boost, even though the issue was not as serious as some congress leaders made it out to be. They also admit that Raja was asked to resign much earlier than required, and this emboldened the Opposition to push the government harder.

There is a strong view in the Congress that asking Delhi Chief Minister Sheila Dixit to step down on charges of corruption would be counter productive for the party and this time around, it would be resisted with all their might.

It is a part of the same thinking that the Congress finally aggressively took on the Bharatiya Janata Party's Murli Manohar Joshi in the Public Accounts Committee and ensured that the draft report could not be adopted by the committee.

It has not been able to fully defend itself on many such charges, deciding instead to take the moral high ground and ask its chief ministers and ministers to resign.

But after over a year of being battered and bruised, the party now wants to stand up and fight, said a well-informed party functionary.

Some evidence of this was evident when the party decided to take on the members of civil society and expose their acts of omission and commission on corruption-related issues, after the government was taken by Anna Hazare and company to the cleaners as they capitalised on the public frenzy against corruption.

The government and the party woke up four days too late but when they did, they did a thorough job of digging up the dirt on the crusaders, in what some people called fighting a dirty battle.

Sources say that this strategy would be further fine tuned after May 13, when the results to the five state assemblies would be in. For the moment, the assessment at the highest level in the Congress is that the party along with its allies is winning in all the five states.

In Tamil Nadu, at a time when the Dravida Munnettra Kazhagam's Raja is in jail, the voters would deliver their verdict on whether corruption is an issue in the elections or whether the DMK's popular and populist schemes win the day for the ruling party.

In Kerala, the country's most literate and aware state, a Congress victory would give the party relief send the message that corruption in the corridors of Delhi is not an issue in Kerala.

In Assam, the Congress is looking for a third consecutive term in power, even though the government and the leadership in the state is bogged down on issues of corruption.

A victory in these three states would be a big boost for the Congress and would give them enough ammunition to both silence and take on the opposition BJP with the monsoon session around the corner in July.

It would give both Congress President Sonia Gandhi and Prime Minister Dr Manmohan Singh enough adrenalin with which to rationalise the anomalies in the government and to discard the non-performers and incompetents, an issue which has been delayed since the UPA returned to power in 2009.

The second anniversary of UPA II on May 22 would be a time to sit back and take stock of what went wrong where and how aggressively the Congress needs to take on the BJP. It needs to discard the defensive approach of the PM, who is only looking at his own popularity ratings, which have continued to dip for some time now.

PAC report has to be accepted by Speaker: Joshi 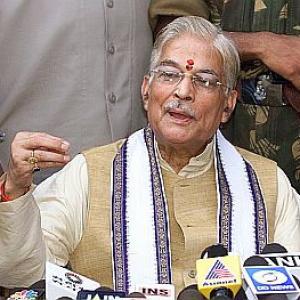