News
Business
Movies
Sports
Cricket
Get Ahead
Money Tips
Shopping
Sign in  |  Create a Rediffmail account
Rediff.com  » News » Why the army can fight in J&K but not Chhattisgarh

Why the army can fight in J&K but not Chhattisgarh

The Cabinet Committee on Security recently resisted the temptation to field the army to fight the Maoists.

The decades-long insurgency has engulfed 230 odd districts and has manifested adequate consolidation lately. The killing of 76 policemen on April 6 at Dantewada, Chhattisgarh, followed by the derailment of the Jnaneswari Express that left 150 dead and the killing of 27 CRPF troopers on June 29, are indicators of the degree of senseless violence they are ready to inflict.

These attacks are also proof of the movement taking a terrorist turn, with the killing of innocent civilians not being a taboo anymore.

However, before we field the armed forces there is reason to take stock of the differences between the Maoist movement and the insurgency in Jammu and Kashmir where the army has also been deployed in strength for decades.

The Maoist problem is India's first fully home-grown insurgency. The problem is rooted in our inept administration and rank corruption that has denied the benefits of growth to a huge swath of our population, who continue to live in poverty.

In contrast, the Jammu and Kashmir problem is a proxy war, covertly and overtly supported by Pakistan. It falls in the category of State-sponsored terrorism.

Also, in sharp contrast to the Maoist-affected interiors where poverty, deprivation and hunger stalk every village, the streets of Srinagar hardly have an impoverished man.

The basic drivers of the Maoist insurgency are politico-economic-social, in essence. Its fuel mix includes our class-ridden social structure that refuses to confer social acceptance and dignity to all. The Maoists' promise of a class-less society offers a world of hope to people who have all along been discriminated on grounds of caste and creed. It has no fundamentalist influence.

In Kashmir, the movement has gone far beyond being fuelled by the demands of independence or merger with Pakistan. Today, it is an extension of fundamental Islamist militancy, with its commitment to the Islamist Caliphate at the end of the road.

The Lashkar-e-Tayiba, the lead militant organisation in Kashmir, is a proponent of this convoluted philosophy.

The Maoist problem encompasses multiple states. The spread of the area affected by insurgency is far larger. Lack of political consensus has eroded the quality of response. Absence of co-ordination between states has allowed freedom of movement to the terrorists. Intelligence sharing mechanisms are yet to be put in place.

In Jammu and Kashmir, in spite of the borders being guarded rather heavily, the rugged mountainous jungle terrain allows induction of weapons by the infiltrators. Though heavy weaponry is difficult to ferry from across the borders, there is no dearth of personal weapons of the best quality like the AK-47.

The Maoists depend primarily on looted old and obsolete armouries of police forces. Of course there are more AK-47s now, but it still is a far cry from what is available in the valley.

The current strength of the Maoist cadre is estimated variously between 10,000 and 30,000. Even if the figure of 10,000 be accepted, it is far in excess of 3,000 odd terrorists that we faced in Jammu and Kashmir when insurgency was at its peak.

Gaining an upper hand over the terrorists in Jammu and Kashmir forced us to deploy over 250,000 men. It has taken us close to 20 years to control the insurgency and bring it down to the level at which it even now simmers.

However, the weaponry of the Maoists being poorer, their combat capability may not be as good. They make up for it in terms of numbers, though. The pros and cons put together, the Maoist problem will also suck in more and more of an already stretched army, if deployed.

In Jammu and Kashmir we legislated the Armed Forces Special Powers Act for applicability in the state. In Maoist areas there is no such legislation operative.

In Jammu and Kashmir, the army initiated a huge perception management operation to win the hearts and minds of the people. The operation's major plank has been Sadbhavna, essentially a civic action programme responsive to the aspirations of the people. In remote areas the armed forces assisted the villagers in improving their quality of life and bringing succour during natural calamities like the snow tsunami and earthquake of 2005.

The fact of change in perceptions is most vividly obvious in the study undertaken by Robert Bradrock, a scholar from King's College, London, which concludes that only two percent people in Jammu and Kashmir favour merger with Pakistan, today.

In contrast, no major perception management initiatives have been launched in Maoist areas. Even if developmental funds that have now been earmarked are put to use, a task difficult as such with the government's writ not extending to the interiors, it is doubtful whether an inept and corrupt administration will allow the benefits to reach those who are its professed recipients.

The differences between the two insurgencies are gapingly wide. In addition, we have to realise that this is going to be the nature of tasks for the police and paramilitary forces, tomorrow. There is no choice they have but to upgrade to standards so that they remain relevant in the emerging environment.

We have had decades to realise these basic truths when the Maoist insurgency was gradually gathering strength. However, the police leadership failed to prepare its forces for the inevitable; an absolute lack of strategic vision. The preparations might as well start today, unfortunately, by paying the price against the Maoists.

ALSO READ: 'The Naxalite is not 10 feet tall'

'Publicity is oxygen for the Maoists'

Brigadier (retired) S K Chatterji
Related News: Kashmir, Jammu, CRPF, Cabinet Committee on Security, Pakistan
SHARE THIS STORY
Print this article
Why we need limited air power to battle the Naxals
Appalling absence of leadership in war on Naxals
Time to get tough with the Maoists 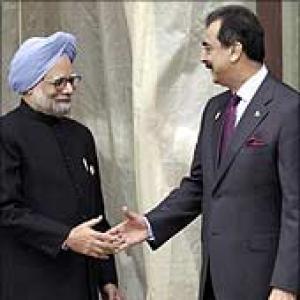 What is the reason for the recent Maoist attacks?