'She should review her strategy of social engineering and get back to the BSP's initial plank of social change.'
Sahil Makkar reports. In the past 15 years, what has remained constant about Mayawati is her style of election campaigning.

She flies in a helicopter and her pilots ensure that they perform some manoeuvre for the crowd waiting below before landing at the rally venue.

Mayawati quickly gets on to the well-fortified podium, deafening sloganeering flows, and then she reads out her speech.

She tells her voters not to get swayed and divided by other parties, and promises strong action against troublemakers.

She doesn't forget to remind the people of her Dalit identity and asks them to make her chief minister again.

While she delivers her speech, her party candidates and leaders stand behind her on the dais.

Immediately after the speech, she heads to her helicopter, which again does some theatrics in the air, and takes Mayawati to another rally.

She addresses two-three rallies a day, without changing the script.

This is the only time she comes close to her party candidates and is seen by Bahujan Samaj Party supporters.

Her campaigning is in complete contrast to her competitors, including Samajwadi Party leader and Uttar Pradesh Chief Minister Akhilesh Yadav and stalwarts of the BJP and the Congress.

BSP supporters say this can't be held against her because, unlike other parties, she is the only face of the BSP and has to cover more than 400 assembly seats in the country's most populous state.

This, however, appears to be an excuse. Mayawati, 61, after the death of party founder Kanshi Ram, has not allowed any party leader to grow in stature and become a star campaigner.

In fact, she threw many senior leaders out of the party for posing a challenge to her authority.

The question is how long she can continue with this strategy, especially when the demographic profile of the state is changing, and other parties are resorting to high-decibel media campaigns.

The BSP was routed in the Lok Sabha elections of 2014. It suffered more than the SP did. It failed to win a seat and the party's vote share declined to 19.77 per cent.

Experts say it was mostly the BSP's young voters who had deserted the party and voted for Prime Minister Narendra Modi's development plank.

Uttar Pradesh had among the highest number of first-time voters (25 million) during the Lok Sabha polls. The same class of voters is again set to change the narrative of the assembly elections now.

"The BSP grew in the past because voters didn't have much option as Mulayam Singh was the only Opposition leader and the BJP was on the decline. Now Akhilesh Yadav has emerged as a new youth icon and the BJP has once again become a formidable force in the state," Mrug adds.

BSP activists too have perceived the threat of losing the Dalit votes. They feel that Akhilesh's reinvented image has put the SP back in the fight, which otherwise would have been a contest between the BSP and the BJP.

But all do not agree. "The hype for the SP and the BJP has been created by the media, mostly represented by the upper castes. The media has always been against Mayawati and the upper castes can't accept a Dalit as chief minister," says a BSP acolyte.

"Mayawati doesn't have the financial leverage to buy enough advertisements in newspapers and television news channels," the acolyte adds.

BSP activists also fear the increased presence of the Rashtriya Swayamsevak Sangh, the progenitor of the BJP, among the non-Jatav Dalits (Mayawati belongs to the Jatav caste) is hurting their poll prospects.

On its part, the BSP has started its campaign on social media, including launching its first Twitter account, and radio channels, but it is still far behind the BJP, the Congress and the SP, which have hired high profile campaign managers and publicity firms.

Ram Chander, professor at Jawaharlal Nehru University and a BSP ideologue, however, feels the party need not copy the strategies of others.

"Others make changes according to the BSP strategies."

Badri Narayan, the Uttar Pradesh-based political analyst and expert on Dalit affairs, says Mayawati has never been an expert in perceptional politics.

Of late, she has increased media interaction and press conferences. "But it doesn't mean that she should not continue what she has been doing. She distributed tickets one-two years in advance and her party workers have been strongly campaigning in the villages," Narayan says.

Anil Kumar, a Faizabad-based political analyst, says Mayawati should show flexibility and allow the BSP's rank and file to launch public campaigns in their respective areas. The party is always silent on most crucial issues.

"She should also review her strategy of social engineering and get back to the BSP's initial plank of social change, which means empowering the party's core voters and others in society."

The social engineering through which she brought the Brahmins and Dalits together in the 2007 assembly elections can, in hindsight, be attributed to strong anti-incumbency against the SP government and also to the absence of a strong alternative.

"This change in strategy has disillusioned Dalit voters as they still get rough treatment from the upper castes. This situation has not changed despite Mayawati being in power in Uttar Pradesh three times," Kumar says.

The BSP is now trying another social engineering experiment by bringing the Dalits and the Muslims together.

The party has given a record 100 tickets to Muslims, who are nearly 20 per cent of the state's population and have influence in more than 125 assembly seats.

Many experts are unsure whether Mayawati will be able to transfer the entire Dalit vote to its Muslims candidates. The results of the assembly elections on March 11 would be a final answer to many of these questions. 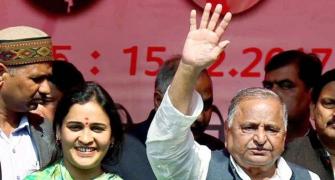 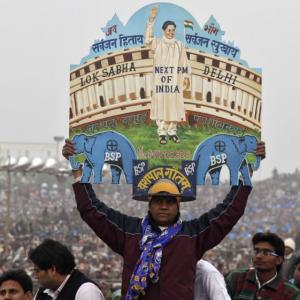