News
Business
Movies
Sports
Cricket
Get Ahead
Money Tips
Shopping
Sign in  |  Create a Rediffmail account
Rediff.com  » News » Why many aspirants to miss NEET-JEE next month

Despite being fully prepared to take the NEET exam scheduled to be held next month, Inzamam Ali will most likely miss it due to the flood situation in his home state Bihar. 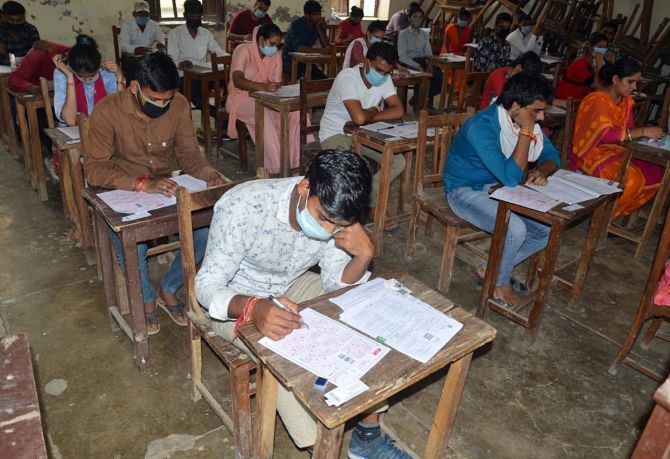 Ali is among the lakhs of NEET aspirants and wants the highly competitive medical entrance exam to be postponed.

"I am from Gopalganj district in Bihar and my area has been flooded for the last one-and-a-half months. The roads are broken and there are power cuts. I don't think I will be able to take the exam," he said.

Ali said he inquired from a private transporter about taking him to Patna, where his exam centre is located, but he would charge Rs 10,000 for a one-side journey.

"It means that I will end up spending Rs 20,000 just for taking the exam. My father is a farmer and he won't be able to afford this much," a dismayed Ali said.

He said he has taken coaching at Kota for the NEET exam but might not be able to fulfil his dream this year.

"There are 50 other NEET aspirants in my area and all of them are facing the same issues. We have also been facing power cuts for 10 to 15 days at a stretch. It means that we are only able to study during the day and not at night. Our only request is to postpone the exams," he said.

Shree Chandana, a NEET aspirant from Kerala, is in quarantine after coming in contact with her neighbour who tested positive for coronavirus.

Her area is a containment zone with severe restrictions in place.

"I dropped two years to prepare for the NEET exam and it seems that this year, I won't be able to take the exam. There is no transport facility that I can use for reaching my exam centre, which is 60 kilometres away," she said.

Chandana said she lives with her aged grandparents and is scared for them due to the pandemic.

Advaith DS, one of the petitioners in the Supreme Court seeking postponement of the medical and engineering exams amid a spurt in the number of COVID-19 cases, said he had been receiving hundreds of calls from NEET and JEE aspirants sharing their woes. The petition was dismissed by the apex court.

"There are students who are stuck in floods, who do not have transport facilities and then there are also a couple of students who called up that they are taking care of their father or mother who contracted the virus. There are many students who have dropped three or four years to prepare for these entrance exams but they are not sure about taking the exams," Advaith, who himself is a NEET aspirant, said.

Danish Khan, a NEET aspirant, said he has been allotted an exam centre in Patna, which has had more than 20,000 cases of the viral disease so far.

"There was a Jallianwala Bagh massacre which happened during British rule and there is one which is happening currently in the name of NEET and JEE exams. My exam centre is 250 kilometres away and travelling, lodging and even eating out will be an issue," he said.

"The government, which is adamant on conducting exams, should guarantee all the aspirants that they and their family members will get the best possible treatment if they contract the virus after the exams," he said.

Khan said many of his friends in Bihar are stuck in flooded areas and do not even have access of food and basic amenities and will have to forego these exams.

Ambuj Shukla, a JEE aspirant from Thane in Maharashtra, said the state is currently in a lockdown situation and there is no public transport and all the hotels and lodging facilities are shut.

Shukla said what the authorities are missing is the fact that when students go to the exam centres, they will be accompanied by their parents who will also be exposed to the virus.

Shukla said even though the students will have to fill out self-declaration forms about their symptoms and whether they have come in contact with a coronavirus patient, a student who has travelled for five hours to the exam centre may not disclose the correct information.

"Also, what about the asymptomatic carriers of the virus? Agreed, there will be thermal screening of the students but what about those who do not have symptoms but are infected," he asked.

Student bodies like the Left-affiliated All India Students' Association and the Congress-affiliated National Students' Union of India have been raising the issue and have demanded the postponement of the two exams.

The AISA has been holding online protests, press meetings and even held an online hunger strike which saw the participation of over 4,000 students.

Members of the NSUI sat on an indefinite hunger strike to demand the postponement of NEET and JEE exams.

Increasing the number of examination centres, alternative seating plan, fewer candidates per room and staggered entry and exit are among the steps the National Testing Agency will take for safely conducting the NEET and JEE exams next month. 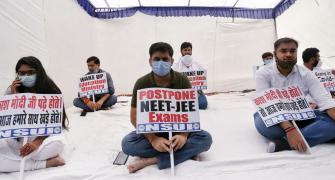 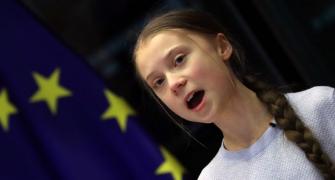 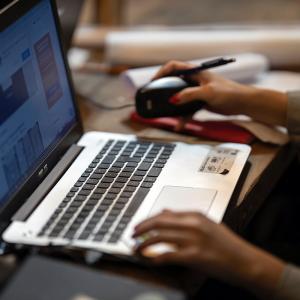