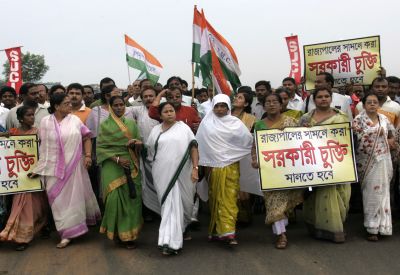 With her simple cotton saree and hawai chappal, Mamata was always identified with the poorest of the poor Bengali. But this sudden burst of chit fund network of seemingly cheat companies has dragged her into the cesspool. Sheela Bhatt analyses.

If one carefully reads the letter written by accused Sudipta Sen, owner of Saradha group of companies, to the Central Bureau of Investigation, it seems clear that few facts are hidden amongst the many lies.

While reading the letter one would know how accused Sen and alleged co-conspirators are lying from their teeth.

Sen’s explosive letter is in essence the attempt to absolve himself of all liabilities towards the poor people of West Bengal who invested in millions in the chit fund run under Sen-owned-Saradha group of companies.

Sen, now arrested, is alleging that Trinamool Congress Members of Parliament Kunal Ghosh and Srinjoy Bose were blackmailing him for huge sums of money all through the last few years. Ghosh is a confidante of West Bengal Chief Minister Mamata Banerjee. The MPs are denying their involvement, though unconvincingly, since the last week.

If, along with Sen’s letter, one reads the detail account (external link) of credible journalist Seema Guha in The Hoot, one knows that Trinamool Congress’s leaders -- widely known as “Mamata’s men” -- are closely linked to scamster Sen.

Poor Indians have been cheated by chit funds scores of time before in other parts of India, and even in West Bengal. The modus operandi of the cheaters is, always, similar. However, the big difference this time around is that the charismatic West Bengal chief minister has been hopelessly linked here due to well-publicised closeness to Ghosh and Bose who are directly linked to the scam that is unfolding.

With her simple cotton saree and hawai chappal, Mamata was always identified with the poorest of the poor Bengali. She stood against land deals that were found against the interest of farmers. She agitated for people’s causes for more than two decades. She entered the history books when she ended the Left rule in West Bengal. But this sudden burst of chit fund network of seemingly cheat companies has dragged her into the cesspool.

As it is she was losing her halo due to absence of governance in the state under her leadership. Now the chit fund scam will pose one of the biggest challenges before her. Many experts say if Mamata doesn't get a grip of the state a kind of civil war will break up.

It will require enormous political maneuvering to save her party and her own image. It is really astonishing to see the-fast-dwindling goodwill of Mamata Banerjee.

Her supporters claim that it’s just an “urban Bengal” phenomenon. But even if it’s so, it’s a substantial setback for Mamata. Whatever will be the fate of Sen and other accused, Mamata Banerjee’s image will never be the same again.

And there are reasons for it.

Since long she was accused by Communist Party of India-Marxist leader and former state housing minister Gautam Deb that the chit funds collected -- by fraudulent or decent means -- by many companies were being used for funding Trinamool Congress’ party activities. Initially such allegations from Left leaders were considered political as they have lost power. But now, as one poor investor has committed suicide and other victims of chit fund companies have come on streets, Mamata is feeling the heat.

She will be haunted by the chit fund scam for long because it’s highly unlikely that poor people who have lost money in Saradha-backed chit fund will get their full investment back. Their money is as good as gone. Even in economically healthy states like Maharashtra and Gujarat such deception has ended in human miseries. Mamata will be able to do very little to help the poor victims.

It must be said that Sen’s letter must not be taken on face value and should be doubted at every point. His mention of Finance Minister P Chidambaram’s wife and lawyer Nalini Chidambaram, where he alleges that he paid Rs 1 crore in connection with a new project in North East, may or may not be a diversionary tactic.

The letter is drafted, clearly, with the help of a lawyer.

Like Kunal Ghosh, who is in deep trouble due to Sen’s chit fund scheme, what is important in the event is that Mamata has collected people around her who are exploiting her fears and insecurities.

K D Singh, another leader of the Trinamool, is one such leader, allegedly getting funds through chit fund types of network. He is a confidante of Mamata and currently under investigation.

Due to a coterie around her consisting of people with doubtful background, her party’s organisation is in mess with vertical divide.

Recently, during the election of President, Trinamool Congress came at the breaking point. Senior leader Somen Mitra and few other MPs were, reportedly, keen to rebel and go against Mamata's line to vote in favour of Pranab Mukherjee.

With growing dissatisfaction amongst top leadership, the party is out of shape. More so because many old guards, who were part of Mamata’s team, are now thrown out or replaced by Ghosh and Bose types of operators, are saying there’s a limit to hypocrisy even in politics.

They point finger at Abhishek Banerjee, son of Mamata’s brother Amit, who is the chairman and managing director of Leaps and Bounds private limited (external link). Abhishek is married to Jasmeet, belonging to a Delhi-based Sikh family.

A senior leader of her party says, “Abhishek is Mamata’s liability in-making.”

They point out that in style and fashion he is comparable to Congress president Sonia Gandhi’s son-in-law Robert Vadra, who also loves branded stuff. In an open case of nepotism, Abhishek is also the national president of the All India Trinamool YUVA. Abhishek’s company is not found doing anything wrong so far, but her party leaders are murmuring with envy about Abhishek and his businesses.

Abhishek’s company’s website claims it is a “global management consultant specialising in strategy and operations management based in Kolkata and in the state of West Bengal, India, having operations in the major corners of the country serving venerated corporations and organisations.”

A senior leader of West Bengal asked in just four years how’s Abhishek been able to expand his company into a pan-Indian organisation? Within party Abhishek has teamed up with Derek O’Brian and Mukul Roy, members of Mamata's core group.

Abhishek's company’s website also says, “He is an ardent reader, gizmo fanatic, marketing maniac and an avid sports enthusiast with interests in cricket, tennis and golf. He enjoys world cinema, a gourmand when it comes to Chinese and Thai cuisines, loves listening to ghazals and voyaging with family.”

With Mamata losing control over law and order situation in a state of million failed aspirations, with her party being divided house, and with a coterie around her exploiting her insecurities, Mamata Banerjee cuts a sorry figure. Her loss is her voter’s loss, too.

Image: Mamata’s loss will be her voter’s loss too 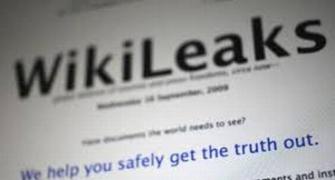 'Sonia must clarify on Wikileaks' charges against Rajiv' 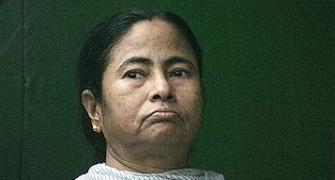 Why Mamatadi must own up Saradha responsibility
PM may want third term, but does anybody want him? 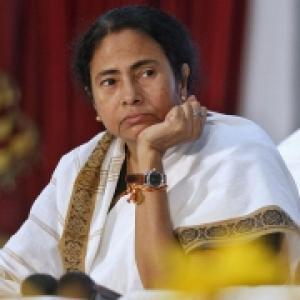 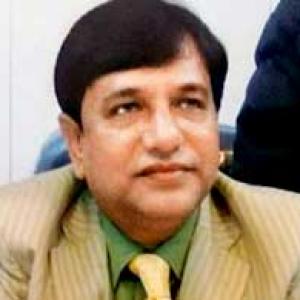