A drama unfolded at the West Bengal legislative assembly in Kolkata on Thursday as governor Jagdeep Dhankhar was made to wait outside the assembly as the gate designated for his entry was locked and the speaker and staff were nowhere to be found. 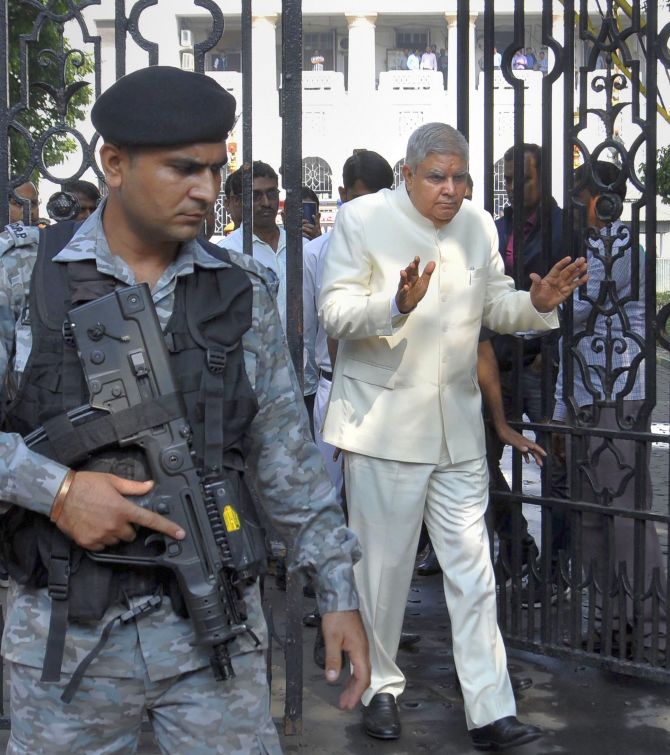 IMAGE: West Bengal governor Jagdeep Dhankhar being escorted by CRPF jawans as he comes out from West Bengal assembly during his visit. Photograph: PTI Photo

Seething with anger, Dhankar, said the "humiliation" meted out to the governor's post has put the country's democratic history to "shame" and reflects the "caged democratic atmosphere" prevailing in the state.

The Trinamool Congress, was quick to react, slamming governor for overstepping his brief and "aspiring to be the administrative head of the state".

Dhankhar later entered the assembly premises through Gate no 2 meant for media persons and officials.

"Why is gate no 3 closed? Despite my prior intimation,the gate is closed. The assembly being adjourned does not mean it is closed. The governor's gate being locked has put our democratic history to shame. This is not an insult to me, but an insult to the people of the state and the Constitution. I felt bad. But I went inside through a gate that was open. I found inside a deathly silence," Dhankhar told reporters.

According to the assembly norms, gate no 3 is designated for the governor's entry and exit.

"Democracy is being humiliated, not me. It reflects we are trying to cage democracy. My heart is bleeding today. How can this ever happen in a temple of democracy? I went through the entire building, saw a deathly silence, on a working day," he said.

Dhankhar had on Wednesday written to assembly speaker Biman Banerjee expressing his desire to look into its facilities and also visit the library.

The speaker suddenly turned down his invitation to him, mentioning that he would not be available, he said.

"I wonder what happened during one-and-a-half hours that every thing changed. I will write to the speaker that what happened today has belittled his chair", he said.

Hitting out at the state government for trying to undermine democratic norms and constitutional posts, Dhankhar said he will not be "cowed down" by such "antics" of the ruling TMC.

"I will continue to work towards upholding the constitutional and democratic norms. The role of the governor and the government is clearly defined in the Constitution. I can't be cowed down by such antics," he said.

The governor later visited the assembly library, but his official photographer was denied entry with him as assembly staff said the photographer did not have prior permission.

Later while leaving, governor met leader of the opposition Abdul Mannan, who was entering his chamber in the assembly.

Repeated calls to speaker Banerjee for a reaction on the developments went unanswered.

Reacting to the allegations, state parliamentary affairs minister and TMC leader Partha Chatterjee said, the governor is aspiring to act like an "administrtaive head of the state" and in due course is creating an anarchic situation.

"The governor is trying to create an anarchic situation in Bengal. He is aspiring to become the administrative head of the state. He should be satisfied with his constitutional limits. Before questioning us he should reply why the expenses of governor house has risen to Rs 7 crores. Then he should talk about protecting democracy," Chatterjee said.

"If he wants to visit any part of the state, he should not waste public money rather do it on his own", he said.

Mannan, however, criticised the state government and said the way the governor is being humiliated is unprecedented and unacceptable.

"There can be differences but that doesn't mean that governor is humiliated on a daily basis. This is unprecedented in democracy," the senior Congress leader said.

Bharatiya Janata Party leader Mukul Roy echoed Mannan, saying in no other state a constitutional head is humiliated in such a manner.

In an unmatched development on Tuesday, the speaker had adjourned the House for two days, saying that the bills, slated to be placed in the assembly, were yet to get the Governor's approval.

However, the claim was refuted by the Raj Bhavan, which in a statement termed the situation as "factually untenable".

Governor, while referring to delay in giving nod to bills, said his queries regarding the bills were not addressed by the state government and he does not act like a "rubber stamp".

"The anti-lynching bill that was passed in the assembly and the bill for which nod was taken from me was completely different. All the opposition parties have complained about it. When I sought clarification from the assembly secretariat and the government, they are yet to place it," he said.

Since assuming charge in July, the governor has been at loggerheads with Mamata Banerjee's government over a number of issues -- ranging from seating arrangement at the Durga Puja carnival to his unscheduled visit to Singur.

Further, none of the senior state officials attended the meetings convened by the governor during his visit to North and South 24 Parganas districts. 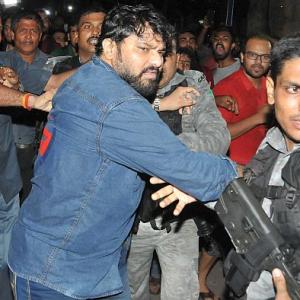