News
Business
Movies
Sports
Cricket
Get Ahead
Money Tips
Shopping
Sign in  |  Create a Rediffmail account
Rediff.com  » News » Why farmers in UP are not protesting

Robust procurement of paddy and wheat since 2017 and prompt payment to farmers have helped the UP government cultivate a positive and pro-farmer perception, defusing possible farm face-off situations.
Virendra Singh Rawat reports. 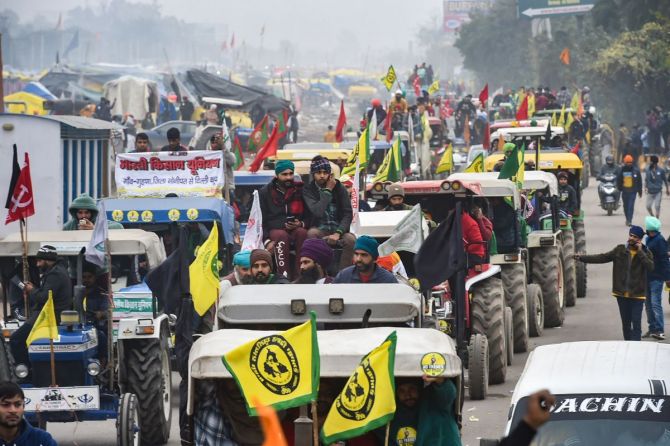 IMAGE: Farmers on their way to the Tikri border as part of their ongoing protest against the farm laws, January 7, 2021. Photograph: Arun Sharma/PTI Photo

Even as the Delhi borders are on the boil with hundreds of farmers, mostly from Punjab and Haryana, protesting against the new central farm laws, Uttar Pradesh -- home to 23 million farming households -- has remained largely calm.

Uttar Pradesh witnesses sporadic protests in a few Western districts and state farmers voice support for their protesting brethren from Punjab, but the farm community has, by and large, conspicuously refrained from any vociferous form of demonstrations or sit-ins.

UP farmer activist and leader Avdhesh Kumar Mishra said the new farm laws were in favour of the agriculture sector and the state farming community supported them "wholeheartedly".

"Once farmers understand the real benefits of the laws, the ongoing protests by groups of farmers near Delhi will be over."

Of the 23 million farming households in UP, almost 21 million, or more than 90 per cent, are of small and marginal farmers with fragmented land holdings, living on low farm income.

While Chief Minister Yogi Adityanath is helming the farmers' outreach programme to propagate the purported benefits of the farm laws, a vital factor coming in handy for the state government to avert the spiral of protests is its flagship Rs 36,000-crore crop loan waiver scheme.

This was one of the biggest pre-poll promises of the Bharatiya Janata Party in the run-up to the 2017 assembly elections.

Initially, the crore loan waiver was estimated to benefit 8.6 million small and marginal farmers who had taken bank loans during the 2015-2016 financial year.

But it turned out to be an overestimate and the scheme eventually facilitated direct financial relief of more than Rs 24,500 crore (Rs 245 billion) to 4.5 million farmers after scrutiny of applicants and weeding out duplicate claims.

The massive waiver had not only written off the outstanding loans, but also made the beneficiaries eligible for fresh loans from banks.

At the same time, UP is also the top beneficiary of the Centre's flagship PM-KISAN scheme -- which provides annual ex gratia payout of Rs 6,000 to farmers -- with total beneficiaries expected to hit the 29-million mark after the 2021 Census, against the current estimate of 23.3 million.

Besides, robust procurement of paddy and wheat since 2017 and prompt payment to farmers have helped the state government cultivate a positive and pro-farmer perception, defusing possible farm face-off situations.

For example, the state has already logged about 4.5 million tonne (MT) of paddy procurement in the current kharif marketing season.

UP is targeting 5.5 MT of paddy purchase and the procurement level is already 80 per cent of the seasonal target, with two months still left in the kharif procurement cycle.

As many as 119 private and government sugar mills in UP have also paid more than Rs 1.12 trillion to cane farmers since 2017 to keep the farming household in good humour, especially in the Western UP pockets.

According to economist and farm sector expert Yashvir Tyagi, farmers in Western UP districts adjacent to the National Capital Region are more concerned about the prices of sugarcane, which is the main cash crop but does not fall under the Agricultural Produce Marketing Committee (APMC) domain.

The average size of land holdings in UP is merely 0.73 hectare, compared to 3.62 hectare in Punjab.

The preponderance of marginal and small farmers results in a smaller marketable surplus of agro commodities in UP and, therefore, such farmers find it more convenient to sell outside APMC mandis.

"The income from animal husbandry and horticulture forms a substantial part of an average farm household income in UP, and these activities are outside the ambit of APMC mandis, Tyagi said, stating that the dexterous proactive approach taken by the UP government paid dividends.

Senior state BJP leader Chandramohan Singh said the crop loan waiver was the first decision taken at the maiden Adityanath cabinet meeting in April 2017, which heralded "an era of farm prosperity in the state".

"Our farmers have stayed away from the protests as they have unflinching faith in the central and state governments regarding their welfare."

But Congress leader and former UP legislator Akhilesh Pratap Singh flayed the BJP government over the farm laws, claiming they were detrimental to long-term benefits and income of farmers.

"The Centre is peddling lies in the name of the new farm laws, which will only lead to the ultimate disadvantage of small farmers. The truth is state farmers, including from eastern UP districts are also protesting and many of them have already joined the protests at the Delhi borders," he said, arguing the absence of any formidable farmer leader in eastern UP was also responsible for the lack of farmers' mobilisation. 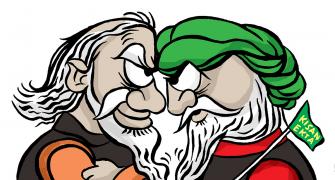 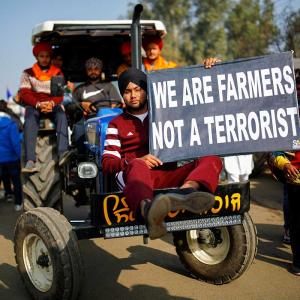 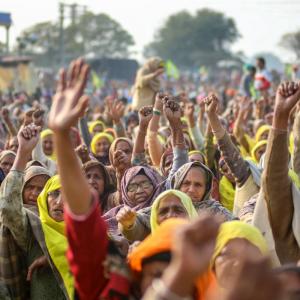