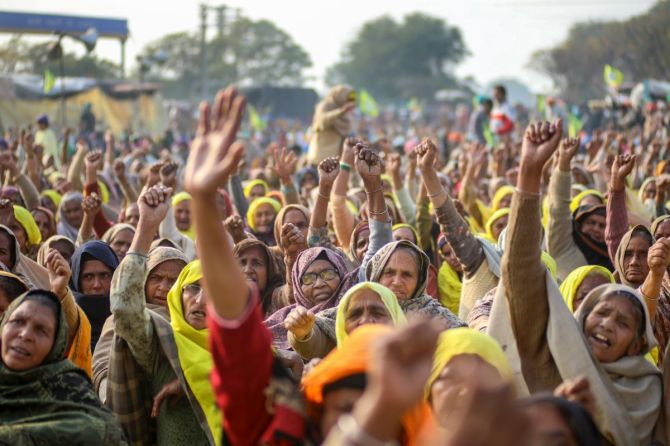 The pre-eminent British expert on Indian agriculture, Barbara Harris-White, emeritus professor at Oxford University, who is also a great friend of India, recently explained 'how agricultural markets develop within the Indian context and the vulnerabilities embedded within them'.

She also said Indian agricultural markets were micro markets; that they need far more capital and technology; and that there's a need for higher farmer incomes.

The need for more capital, technology, and incomes is well understood.

But the same can't be said of the notion of micro markets.

Not only are they not well understood, the interaction between them is not understood, either.

This leads to the further problem that they can't be aggregated in such a way that they can be treated as a single big market, which is what the new farm laws do.

If you grant this, the other question is this: If India's agriculture markets are micro markets, the demand curves in them can't be flat, which they are believed to be when we assume them to be large.

A flat demand curve means that there are so many producers that individually none of them can influence the price.

Every producer is a price taker.

But flat demand curves can be true of only large markets.

They are not as entirely powerless as is being made out.

This slope, no matter how small, can make a huge difference to the farmer's perceptions of risk and its levels.

When, on average, you earn just Rs 20,000 per acre a year, your tolerance for risk has to be tiny.

The exception is Punjab, where, thanks to the minimum support price (MSP), many farmers earn five times as much.

And this is the main point of MSP: It tries to de-risk these markets by artificially making the demand curve flat.

Simultaneously, it also tries to change producers' perceptions about the future by overcoming the Cobweb theorem, which says next year's farm output is based on this year's farm prices.

Thus, in my opinion, MSP, to the extent that it seeks to smoothen the income stream, is more like a salary.

Diluting it by having competing markets is like having 'variable pay', in which salary is dependent on everything except the employee's own marginal revenue product.

Variable pay, incidentally, is a way of reducing the actual cost to the company, which in the case of agriculture is the government.

The prime minister has said as much.

But suppose competing markets spring up. What will happen to the slope and the consequent risk perception?

If prices are the same across markets, no one will be worse off.

But if neighbouring markets have differential prices, and if this difference is greater or lower than the transport cost from the farm to them, what will be the slope of the demand curve?

The answer depends on the distance between any two markets.

The farmers at the mid-point will be the worst-off ones as they have to travel the most between them.

So if at all someone has to be compensated, it is these farmers if the cost of transportation is excessive.

But this seems unlikely if the produce is picked up at the farm gate, as it is in the southern states and will be in Punjab also.

Indeed, what we have in Punjab is the equivalent of lazy banking, namely, lazy farming.

The farmers there want to keep the price line flat because they overproduce owing to huge input subsidies and an assured government market.

Let me end this by saying that while farming is about economics, farmers are about politics.

What you choose to talk about depends on whether you are in government (farming) or in the Opposition (farmers).

This is what international experience since around 1800 shows.

The experience also shows that governments in electoral democracies which try to reform farming get clobbered by the farmers.

This is what, among other things, happened to the UPA. This is what the NDA is trying to avoid -- I think. 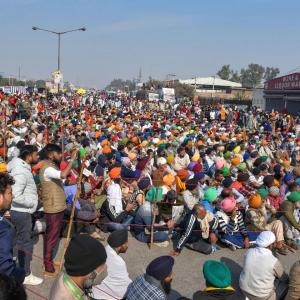