'This is not about early or delay. This is a laid down process' 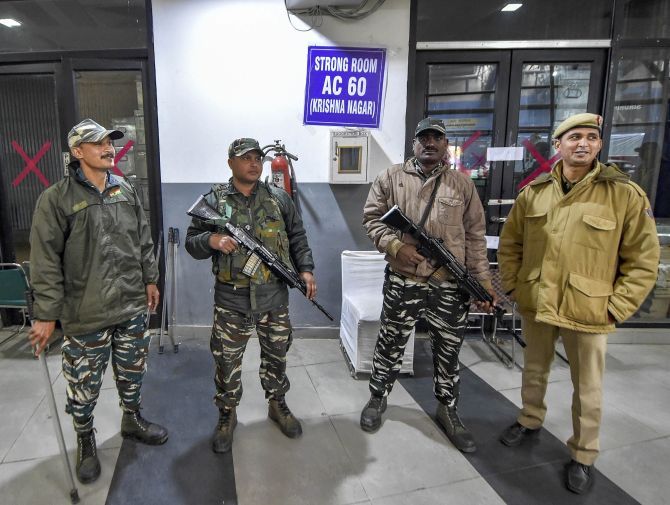 IMAGE: Security personnel stand guard outside a strong room, a day after national capital went to polls for the assembly election at a counting centre in Akshardham, New Delhi. Photograph: Ravi Choudhary/PTI Photo

Delhi Chief Electoral Officer Ranbir Singh on Sunday said there was no unusual delay in announcing the final voter turnout figure as the returning officers were busy with scrutiny of data throughout the night to ensure its accuracy.

Addressing a press conference, Singh tried to allay all the fears as expressed by a section of political parties over delay in releasing the final voting figures for the Delhi assembly elections held on Saturday, saying "they did not want to speculate and wanted to give exact figures".

"So, returning officers worked throughout the night to check data to ensure it is accurate," Singh said while asserting that the delay was not unusual rather it was done in a good time.

He said there were more than 13,700 polling stations in the national capital and they had to add data from each station and ensure that every vote is accounted for.

It is not matter of late or early as soon as the voting per cent was finalised, it was shared with the public, he said.

After elections to the 70-member Delhi assembly were held on Saturday, poll officials had said there was a turnout of 61.46 per cent, subject to revision.

With no final word from the EC till 4 pm on Sunday, Aam Aadmi Party chief and Delhi chief minister Arvind Kejriwal took to Twitter saying it was "absolutely shocking" that the poll panel was not coming out with the final voting figures.

"What is EC doing? Why are they not releasing poll turnout figures, several hours after polling?" Kejriwal tweeted.

At a press conference held at 7.15 pm on Sunday, Singh said the final voter turnout was 62.59 per cent.

"This is not about early or delay. This is a laid down process," Sandeep Saxena, Senior Deputy Election Commissioner, said.

"We wanted to come out with accurate figure rather than speculating. This is not uncommon and we are not late," he said.

The highest voting of 71.6 per cent was reported from Ballimaran constituency, while the lowest turnout was in Delhi cantonment at 45.4 per cent, Singh said.

Okhla assembly constituency recorded 58.84 per cent voting. Shaheen Bagh and Jamia Nagar, where protests against the amended Citizenship Act are on, fall under this constituency.

Seelampur constituency recorded a turnout of 71.2 per cent, according to the data.

Exit polls on Saturday predicted an easy win for the AAP against the Bharatiya Janata Party and the Congress.

The Aam Aadmi Party said the delay in announcing of final polling figures was suspicious and asked if the poll panel was waiting for BJP office's nod.

"BJP leaders are giving the voter turnout figures and on the other hand the Election Commission has not been able to give the final voting percentage 24 hours after polling got over," Kejriwal's deputy and Aam Aadmi Party leader Manish Sisodia asked

AAP leader Sanjay Singh alleged at a press conference that "something is cooking" and "a game is being played secretely".

"This is perhaps the first time in the 70-year history of country that the Election Commission is not ready to release the final figure of voter turnout. The entire country and Delhi have been waiting for the polling percentage since yesterday," he said.

Counting of votes is on Tuesday. 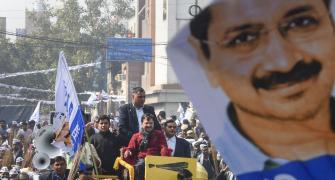 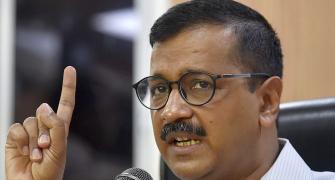 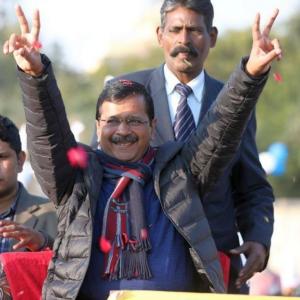