Force 'king of looters' out of Delhi: Rakesh Tikait

BKU leader Rakesh Tikait said on Monday that the protest against the Centre's agri-marketing laws could go on for a long time and urged farmers to force "the king of looters" out of Delhi. He also accused "the king" of putting a value on bread.

"He is the last king of looters (luteron ka badshah). He has to be forced out of Delhi," Tikait said without naming anyone at a "kisan mahapanchayat" in Nohar of Hanumangarh.

"He does not have any affection towards the flag and the country. He is a businessman," Tikait added.

The farmer leader also said a beggar and a businessman do not have affection for the country and the fields as they go wherever they get the right money.

"A businessman and beggar do not have affection for the country and fields. A beggar will move wherever he gets right money and a trader will do the work where he gets profit," Tikait said, adding that the fight against the laws could go on for long and till a legislation guaranteeing the minimum support price is enacted, people should remain prepared to march to Delhi.

Earlier in the day, Tikait at a farmers' "mahapanchayat" at Haryana's Sonipat had said when people gather governments get changed.

The Bharatiya Kisan Union leader, who has held a series of 'kisan mahapanchayats' in Haryana this month, also warned that the government could find it difficult to stay in power if the new agri-marketing laws are not repealed.

The farmers' stir against the laws will continue till the time the Centre accepts their demands of repealing the legislations, Tikait said while addressing a farmers' 'mahapanchayat' at Kharkhoda in the state's Sonipat district.

On Sunday, Union Agriculture Minister Tomar had in Gwalior said the Centre was ready to talk to the farmers protesting against the new laws, and that mere gathering of crowd does not lead to revocation of legislations.

He had urged the agitating farm unions to tell the government which provisions in these new laws they find anti-farmer.

Hitting back at Tomar for his remark, Tikait said, "The minister says that mere gathering of crowd does not lead to revocation of legislations."

"They have lost their mind. When crowds gather governments get changed," he told the farmers' gathering.

Farmers, mostly from Haryana, Punjab and Uttar Pradesh, have been protesting at Delhi's borders since November 28 last year demanding rollback of the laws.

"They (the government) should know if farmers can destroy their own produce, then you are nothing before them," Tikait said.

"There are many questions, it is not only the farm laws, but the electricity (amendment) bill, the seed bill, what kind of laws do they want to bring?" he asked and slammed the government for rise in prices of diesel and petrol.

Tikait said that this agitation is not just of farmers, but also of the poor, daily wagers and other sections.

"These laws will destroy the poor. This is not just one law, many more laws like these will come," he said.

Referring to the farmer leaders spearheading the agitation, the BKU leader also reiterated that the government will have to talk to the same committee of 40 members.

The government has held 11 rounds of negotiation with protesting unions and these have remained inconclusive with regard to rollback of the laws.

The agitation against the laws at Delhi's borders with Haryana and Uttar Pradesh is being led by the Sanyukt Kisan Morcha, which is an umbrella body of 40 farmer unions.

Tikait said this stir will go on and farmers will work in their fields simultaneously.

Demanding a law on minimum support price for farmers, he said, "When a law on MSP will be framed, farmers will be protected. This stir is about that, this is about rights of farmers."

Tikait had recently said farmers will not return home till the farm laws are repealed and had added that farmers should be ready to sacrifice their standing crop for it.

The unions are protesting against the Farmers' Produce Trade and Commerce (Promotion and Facilitation) Act, 2020, the Farmers (Empowerment and Protection) Agreement on Price Assurance and Farm Services Act, 2020 and the Essential Commodities (Amendment) Act, 2020.

The three farm laws, enacted in September last year, have been projected by the government as major reforms in the agriculture sector that will remove middlemen and allow farmers to sell anywhere in the country.

However, the protesting farmers have expressed apprehension that the new laws would pave the way for eliminating the safety cushion of MSP and do away with the mandis, leaving them at the mercy of big corporates. The Centre has repeatedly asserted that these mechanisms will remain. 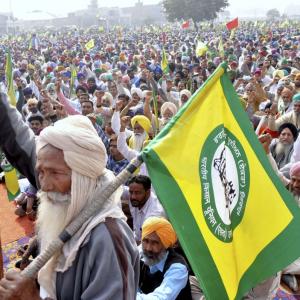