News
Business
Movies
Sports
Cricket
Get Ahead
Money Tips
Shopping
Sign in  |  Create a Rediffmail account
Rediff.com  » News » 'Let them threaten us; we are not scared'

'The prime minister should not have involved himself in these negotiations.'
'If he had not got himself involved and allowed only his ministers to talk to the farmers, things would have not reached this stage.' 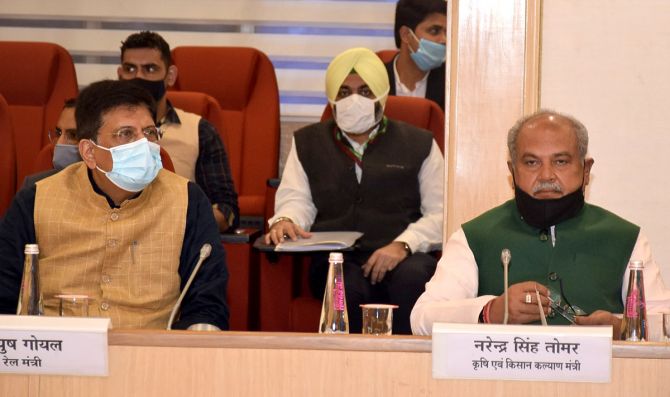 Bhartiya Kisan Union leader Rakesh Tikait -- who was one of the 40 farmers' leaders that met the Narendra Damodardas Modi government's representatives on January 4 -- tells Prasanna D Zore/Rediff.com that the only option left with the government is to withdraw its three farm laws.

"They are getting humiliated in every village of India; the anger of the farmer against this government is on the rise," warns Tikait.

The seventh round of talks between the agitating farmers and government representatives on January 4 has also failed. What will you do now?

We will continue talking to the government whenever and wherever they want and as many times they show their willingness to engage with farmers. We are scheduled to meet again on January 8, and I am hoping that the talks are heading in the right direction.

We have got some hints about the government reconsidering its stand on the repeal of the three black farm laws.

I think the government is getting around the fact that the farmers are not open for any amendments and what we want is complete repeal of these three black laws.

The government, I think, has understood this line quite well now and realised that even if they use any tricks, the farmers are not going to back down from their demand.

The government's representatives (Agriculture Minister Narendra Singh Tomar and Commerce Minister Piyush Goyal) have understood that the farmers are not budging from their position on their demand, so they have asked us to give them some time to think over it (the farmers' demand to scrap the three laws).

Are you saying that the government seems to have changed its stance about repealing the three farm laws?

Yes, it seems that the government is reconsidering its stand.

What made you feel that the government might be willing to change its stand over the repeal of the three laws?

They (the government representatives) told us during the first meeting of 2021 (on January 4) that if farmers have unanimously made their mind that they want the three laws to be scrapped, then they will make their stand clear about it and asked us to discuss it among ourselves.

Who in particular said this to you?

Narendra Singh Tomar said this to us.

Who will the agriculture minister talk to in the government about this? With Prime Minister Modi?

I don't know who he will talk to. Let him talk to anyone; the farmers are not backing down without these three black laws being repealed.

The prime minister should not have involved himself in these negotiations in the beginning.

I feel if he (Modi) had not got himself involved in these talks and had allowed only his ministers to talk to the farmers, things would have not reached this stage.

Now (that the PM is involved and the farmers are not budging from their stand to repeal the three farm laws) they are finding it difficult to back down from their stand and are trying to find a face-saver.

The farmers, however, feel that this is not an ego tussle about who wins or who loses. This is a question of respecting the just demands of India's farmers and we have taken this issue to our hearts.

The government must know that the farmers of India have united against their fight for survival and wants total repeal of the three black laws.

But the government is also using tear gas against the agitating farmers!

We will fight that out patiently and peacefully. If they don't repeal these black laws then there will be many, many agitations of this type.

They will have to withdraw the bills even after using tear gas or whatever other force they plan to use on agitating farmers.

Either they withdraw these bills now or they will have to withdraw them after we further intensify our agitations across India.

Withdrawing the three black laws is the only option left with this government.

The sooner they listen to us, the more comfortable will this government feel to rule the country.

The further they delay it, the heavier will be the losses for them.

What loss will the Modi government suffer?

They work only when they see windfall benefits or severe losses.

Can they continue to rule by harming our interests? This is a revolution happening in India.

Aaj kisan sirf teen kale kanoon chhodne ki baat kar raha hai, gaddi chhodne ki nahi; lekin agar kanoon wapas nahi liye toh mehenga pad jayega inko (the farmers' demand is withdrawal of the three black farm laws; we are not asking them to vacate the seat of power. But the government will have to pay a heavy price if they don't repeal these three laws).

You do your work in Delhi peacefully and let farmers do farming in their fields peacefully.

A video has gone viral where Piyush Goyal is heard telling you that you should shut up as he has got a list of 40 farmers with him. What list is he talking about?

When he (Goyal) was asked to clarify his statement he said that he said so in jest. He said the video was filmed by our side and we should not have posted the clip.

I was just asking the two ministers present (Goyal and Tomar) to give us a list of farmers who were supporting the three black laws.

In response he said we should not make him speak on the issue as he has got a list of 40 farmers (who are agitating for repeal of the three farm laws). He has accepted his mistake and said that he said whatever he said in jest.

But there is limit to everything; he (Goyal) should not have uttered those words.

What was the minister trying to say? What kind of list is he citing while asking the farmers' leaders to shut up?

Is the government threatening farmers' leaders?

Let them threaten us; we are not scared; we have nothing to hide.

What are you going to talk about with the government on January 8?

We will again talk to them about scrapping the three black laws. If that round of discussions also fail, then we will talk again with them.

We will continue to talk to them till the (Union) Budget. We will also see what role the Opposition plays during the Budget session about supporting the farmers' demand.

Let the January 8 talks also fail. We are not worried.

The farmers will continue their agitation, continue talking to the government, keep facing tear gas shells, keep working in our farms and still keep the door of discussions open for the government. 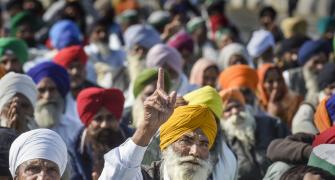