When are you quitting politics?: Posters ask Sidhu

Posters asking Congress leader Navjot Singh Sidhu to keep his promise of quitting politics if Congress president Rahul Gandhi lost the elections from Amethi were seen in Ludhiana on Saturday. 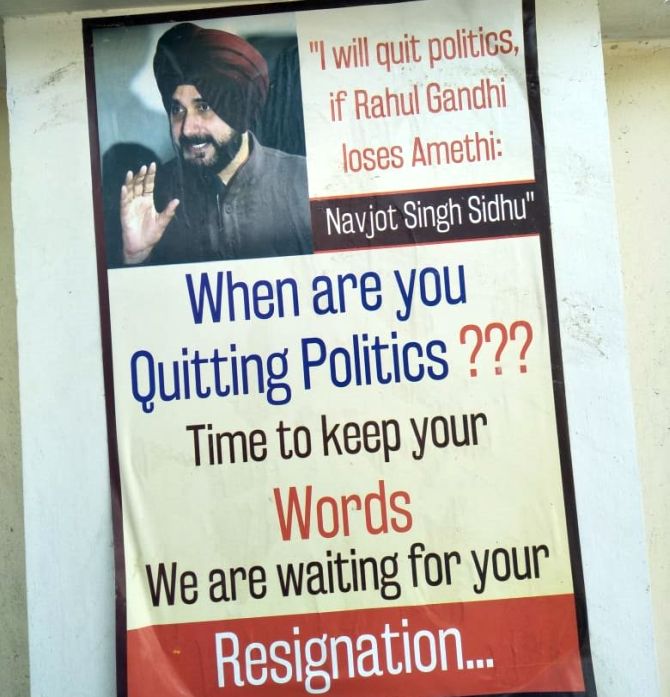 At the time of campaigning for the Lok Sabha elections, Sidhu had promised that he would quit politics if his party president lost from Amethi, where he was contesting against Bharatiya Janata Party's Smriti Irani.

The posters, with a picture of Sidhu, read, "When are you quitting politics? Time to keep your words. We are waiting for your resignation."

The posters also carried Sidhu's promise, "I will quit politics if Rahul Gandhi loses from Amethi."

On Friday, similar posters came up in Mohali.

In one of the biggest upsets in this year's Lok Sabha elections, Congress president Rahul Gandhi lost from Amethi parliamentary constituency by 55,120 votes to BJP's Smriti Irani.

The seat was considered a stronghold of the Nehru-Gandhi family.

Recently, Punjab chief minister Captain Amarinder Singh had stripped the cricketer-turned-politician of the portfolios of local government and tourism and culture and gave him power and new and renewable energy sources ministry.