The severe cold spell in north India has been the harshest on the homeless, but is rough weather the only cause of death of several homeless people?
Rediff.com's Priyanka finds out. 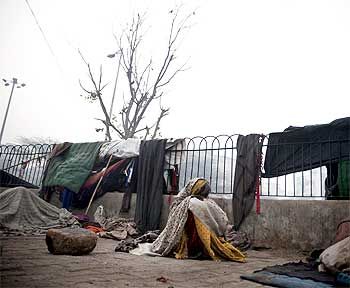 Doctors in New Delhi are worried about the estimated 55,955 homeless people who live in the national capital as north India reels under a cold spell. The doctors say the extreme cold conditions add to the woes of the homeless, who already suffer from a host of ailments.

The past couple of months have been particularity harsh. Around 230 people in Uttar Pradesh, Bihar and other parts of north India have died due to the extreme weather conditions.

Most of the homeless in the capital live and sleep under bridges, on railway platforms, and on footpaths, and are most exposed to the extreme weather. A few temples and a prominent gurdwara also offer the homeless shelter from the cold.

Dr Sukhdeep Singh at the department of forensic medicine at New Delhi's Lady Hardinge hospital argues that cold or hypothermia is not the only cause of death. Singh's department conducts around 700 to 800 post-mortems each year.

Most of the unidentified bodies brought to the Lady Hardinge hospital during the winter, a senior doctor revealed, are from its neighbourhood.

"It is not possible to delineate cold or hypothermia as the single factor for death; there are many factors clamped together leading to death," says Dr Singh.

"The homeless are the most affected by severe weather conditions. They are deprived, most of them are old and have a feeble body constitution," he adds.

His colleague, Dr Arvind Kumar, agrees. Most of the homeless, he says, suffer from existing medical conditions.

"Most of these people have tuberculosis or pneumonia or are drug addicts," says Dr Kumar.

"The cold aggravates conditions already existent in their bodies and they succumb. It cannot be said that the deaths are exclusively because of cold as their bodies, deplete of nutrients, are already carriers of infections," he adds.

The doctors say tuberculosis is one of the most rampant ailments among this population. Some suffer from chronic chest infections or are HIV positive or suffer from heart conditions.

Dr Kumar and a team of doctors at the All India Institute of Medical Sciences, New Delhi, published a research paper after studying the cause of death among the capital's homeless population.

According to the report, 7,008 autopsies were reviewed between 2001 and 2005. Of these, 735 were found to be 'unclaimed dead persons'. Most of the people affected were beggars or destitute.

"They were found to be suffering from chronic infective lung diseases, tuberculosis, alcoholic liver diseases, heart diseases, cerebrovascular accident and cerebral abscess," says Dr Kumar. He is now studying the effect of temperature on the mortality of the homeless.

The Sabzi Mandi mortuary near the Aruna Asif Ali hospital, New Delhi, undertakes nearly 200 post-mortems in a month. It is situated on a busy road and most bodies are brought from the encompassing Azad market or Gole market areas.

A senior doctor, speaking on condition of anonymity, said the number of unidentified bodies at the mortuary rises by about 15 to 20 per cent during the winter.

"Cold is a precipitatory factor and those who live on the roads, and are most exposed to the cold bear the brunt," a doctor at the mortuary said.

Senior doctors at the All India Institute of Medical Sciences say the number of unidentified bodies at the mortuary goes up during extreme weather conditions, both in summer and winter.

Dr B K Sharma, who has been working at AIIMS for almost 29 years, believes roadside dwellers tend to give in under severe weather conditions as their immune systems are already compromised and they are usually asthmatic or suffer from ailments like tuberculosis or a heart condition.

AIIMS conducts about 1,800 post-mortems of bodies brought from locations in south and south-east Delhi. A senior doctor at the facility claimed there has been no "alarming" rise in the number of unidentified dead bodies being brought to the mortuary during this winter.

"A few bodies that are unidentified can always be identified or claimed later on," adds Dr Sharma.

It is not the severe cold alone that kills the city's homeless.

"We see more deaths," says another doctor from AIIMS's forensics department, "during the summer due to heat stroke." 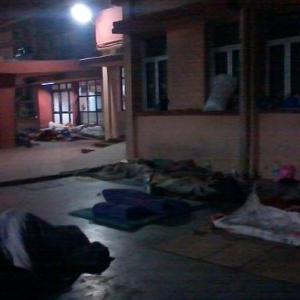 Delhi is freezing but these families have nowhere to go