News
Business
Movies
Sports
Cricket
Get Ahead
Money Tips
Shopping
Sign in  |  Create a Rediffmail account
Rediff.com  » News » What was the need for Jadhav to be tried by a military court?

Pakistan's military courts have gained a disrepute for not being transparent and violating all provisions of a fair trial. 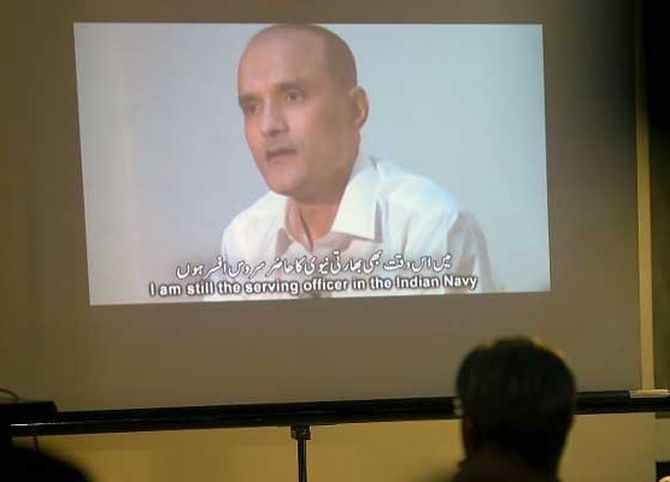 On Monday, April 10, Pakistan Army's Inter-Services Public Relations in a press release informed that Kulbhushan Jadhav, the so called 'R&AW' agent, had been awarded the death sentence by a military court.

As per the release, Jadhav was tried by the Field General Court Martial under the Pakistan Army Act, and awarded the death sentence after he supposedly confessed before the court that he has been 'tasked by India's intelligence agency, Research and Analysis Wing, to plan, coordinate and organise espionage and sabotage activities aiming to destabilise and wage a war against Pakistan'.

This death sentence has been confirmed by Pakistani Chief of Army Staff General Qamar Javed Bajwa.

As per the ISPR, Jadhav, a retired Indian Navy officer, was arrested from Balochistan on March 3, 2016.

However, this claim has been challenged not only by India, but also by other countries.

German Ambassador to Pakistan Dr Gunter Mulack, while speaking at the Pakistan Institute of International Affairs within a month of Jadhav's arrest, informed the gathering that the Indian had been actually caught by the Taliban in Iran and sold to Pakistani intelligence.

Over the last one year that he has been under arrest, the Pakistani authorities refused to act on multiple requests made by the Indian high commission in Islamabad seeking consular access to Jadhav.

This is in clear violation of Article 36 of the Vienna Convention that makes it mandatory on every government to provide access to an arrested foreign national by officials of his/her embassy or consulate.

Oddly, all that the outside world got to see of Jadhav after his arrest was a heavily edited video, released through the Pakistani media, of his so-called confession of being a R&AW agent.

Jadhav was not tried and sentenced by an ordinary Pakistani court but by a military court.

These courts were established soon after the December 2014 terror attack on the army-run school in Peshawar, with the objective of providing speedy trials in cases linked with terrorism.

Through a constitutional amendment, the Pakistan parliament had then voted to empower these courts to try civilians accused of terrorism.

However, it also built in a two-year 'sunset clause' during which time the government was meant to introduce legislative changes to strengthen the civilian justice system.

However, even after the end of two year period in January 2017, the army pushed the ruling government to extend the validity of these courts for another two years despite stiff opposition from other political parties.

So what was the need for Jadhav to be tried by a military court?

It goes without saying that the Pakistani government did not have enough evidence to prove their claims about Jadhav being an Indian spy.

This fact was also revealed by none other than Sartaz Aziz, advisor to the Pakistani prime minister who, while addressing a full senate chamber in December 2016, had categorically stated that the dossier prepared by the Pakistan government on Jadhav contained "mere statements" and did not have any conclusive evidence.

Over the last two years, Pakistan's military courts have gained a disrepute for not being transparent and violating all provisions of a fair trial.

For instance, out of the 274 convictions since February 2015, 161 were sentenced to death, out of whom 144 "confessed" to their crimes. Not only were these trials kept under wraps, the accused also did not have the right to appeal, an essential component of a free and fair trial.

This blatant disregard for rule of law in Pakistan, also attracted the attention of the International Commission of Jurists, which in a strongly worded paper published in 2016 stated that the Pakistani "government and military authorities have failed to make public, information about the time and place of their trials; the specific charges and evidence against the convicts; as well as the judgments of the military courts including the essential findings, legal reasoning, and evidence on which the convictions were based."