News
Business
Movies
Sports
Cricket
Get Ahead
Money Tips
Shopping
Sign in  |  Create a Rediffmail account
Rediff.com  » News » What did Boris Johnson do in Gujarat? Could it have something to do with Gujarat being the state from where the Mahatma, who led the Freedom Struggle that ejected the British out of India, came from?

Anyway, Alexander Boris de Pfeffel Johnson -- Al to his family; Boris to the rest of the world -- began his two-day trip to India in Gandhi country.

Please click on the images for glimpses of BoJo's Gujarat visit. IMAGE: Hair characteristically askew, Boris disembarks in Ahmedabad.
He has been hanging onto his job by the proverbial thread after he became the first British PM to be fined by Scotland Yard -- for hosting parties at 10, Downing Street during the coronavirus lockdown.
Photograph: Ben Stansall/Pool/Reuters 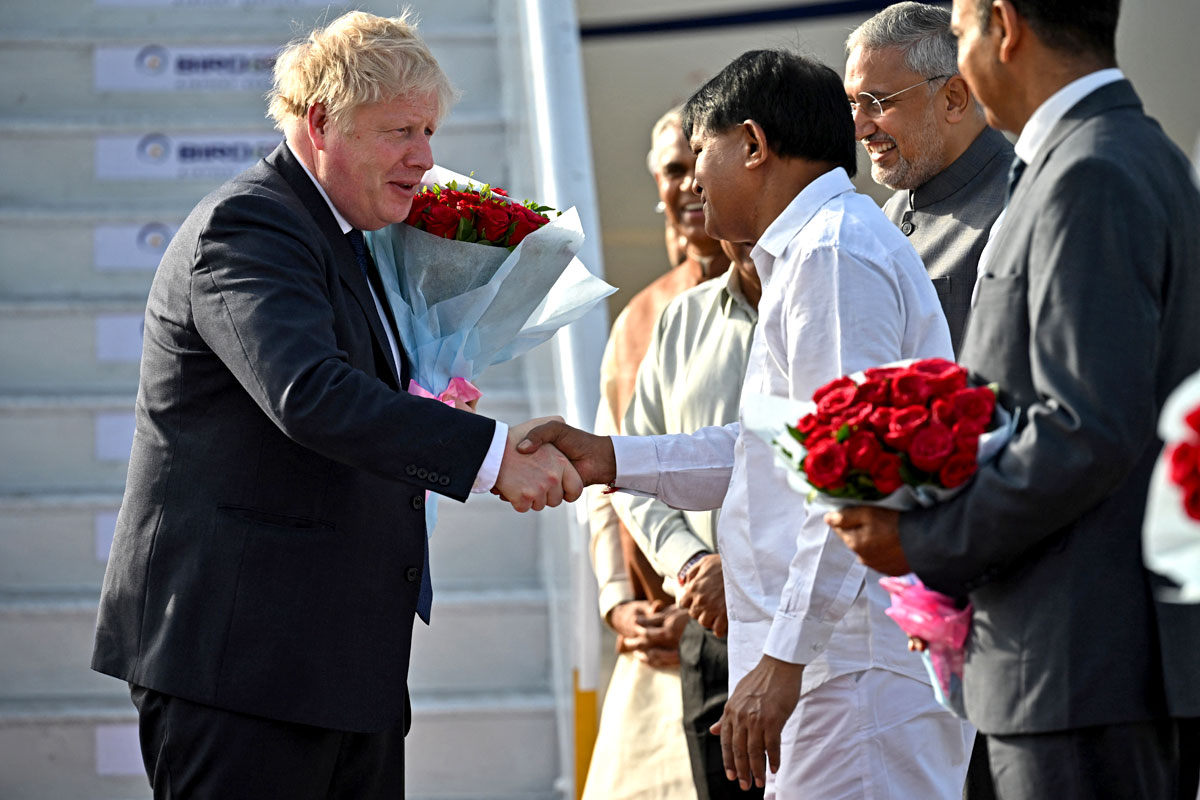 IMAGE: Probably, the only reason his enemies in the Conservative party haven't forced him to quit is because Boris is one of the leaders of the Western coalition standing up to Vladimir Putin and a resignation at this juncture would disrupt the anti-Russia narrative.
Photograph: Ben Stansall/Pool/Reuters 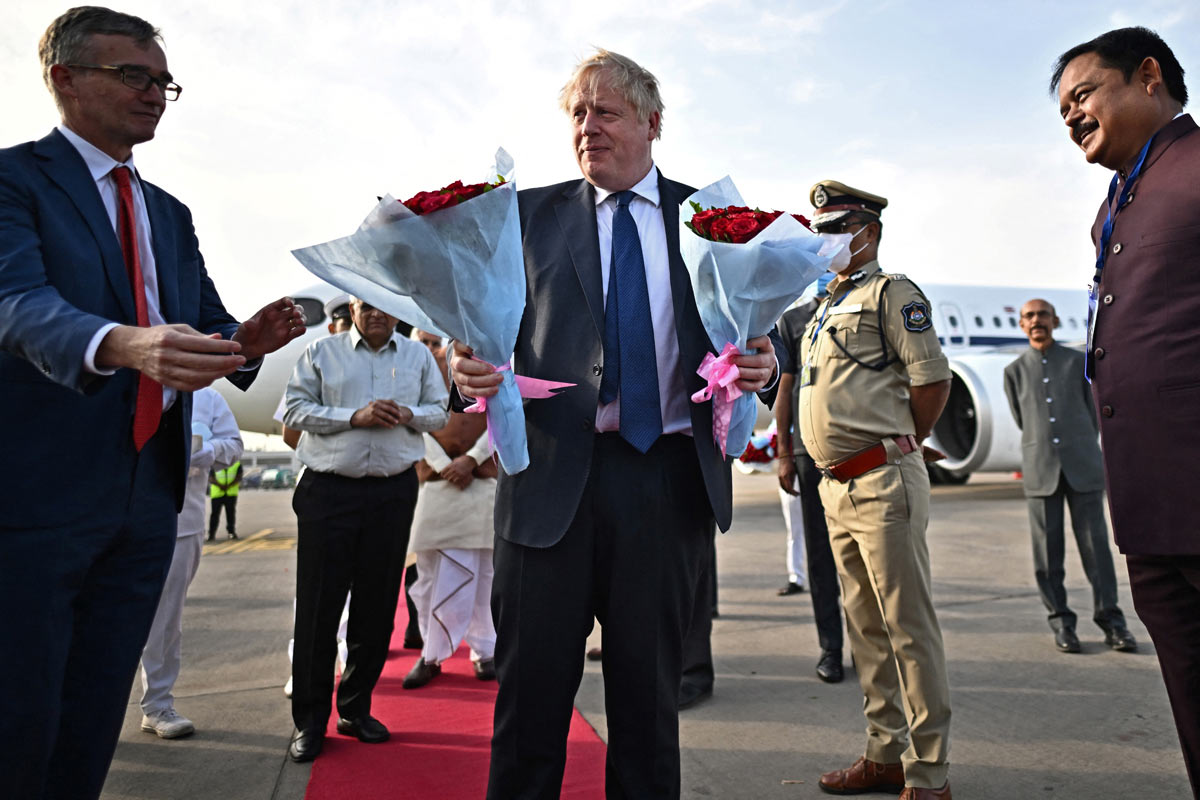 IMAGE: Never at a loss for a word or gesture, Boris appears puzzled at what to do with both bouquets.
Photograph: Ben Stansall/Pool/Reuters IMAGE: Boris at the Sabarmati Ashram, once the Mahatma's home in Ahmedabad.
Eighty two years ago, on March 12, 1930, Gandhiji vowed he would not return to the Sabarmati ashram until India was free.
India became Independent on August 15, 1947. Alas, 5 months and a fortnight later, before he could return to the ashram, the Mahatma was murdered in cold blood.
Photograph: Ben Stansall/Pool/Reuters 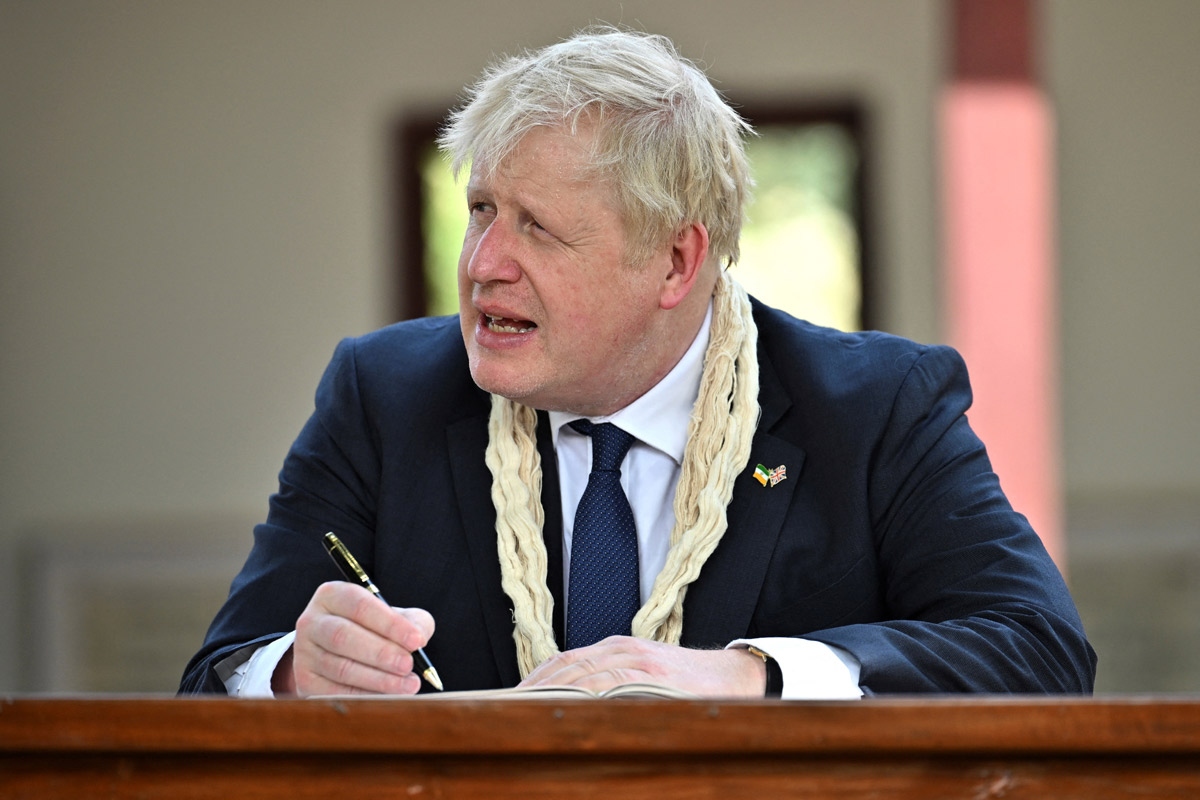 IMAGE: Before he drifted into politics, Boris was a columnist for The Daily Telegraph newspaper and later the editor of the Spectator weekly.
Contemporaries like David Cameron, the former prime minister, likely think of Boris as a flake, but no one can deny his intelligence, his flair for well written prose and his undeniable charm.
Photograph: Ben Stansall/Pool/Reuters 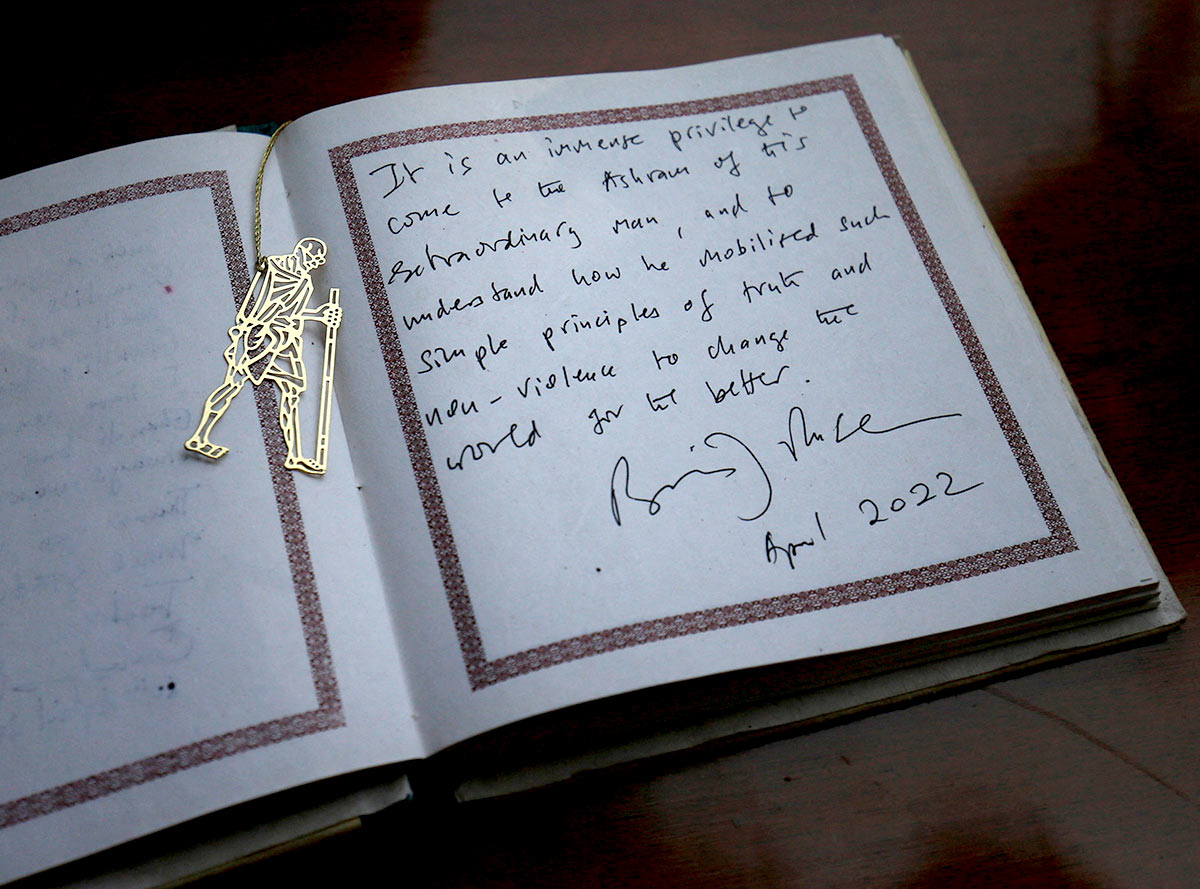 IMAGE: A view of Boris's message in the visitors' book at the Sabarmati Ashram.
Clearly, the work of a writer.
Photograph: Amit Dave/Reuters 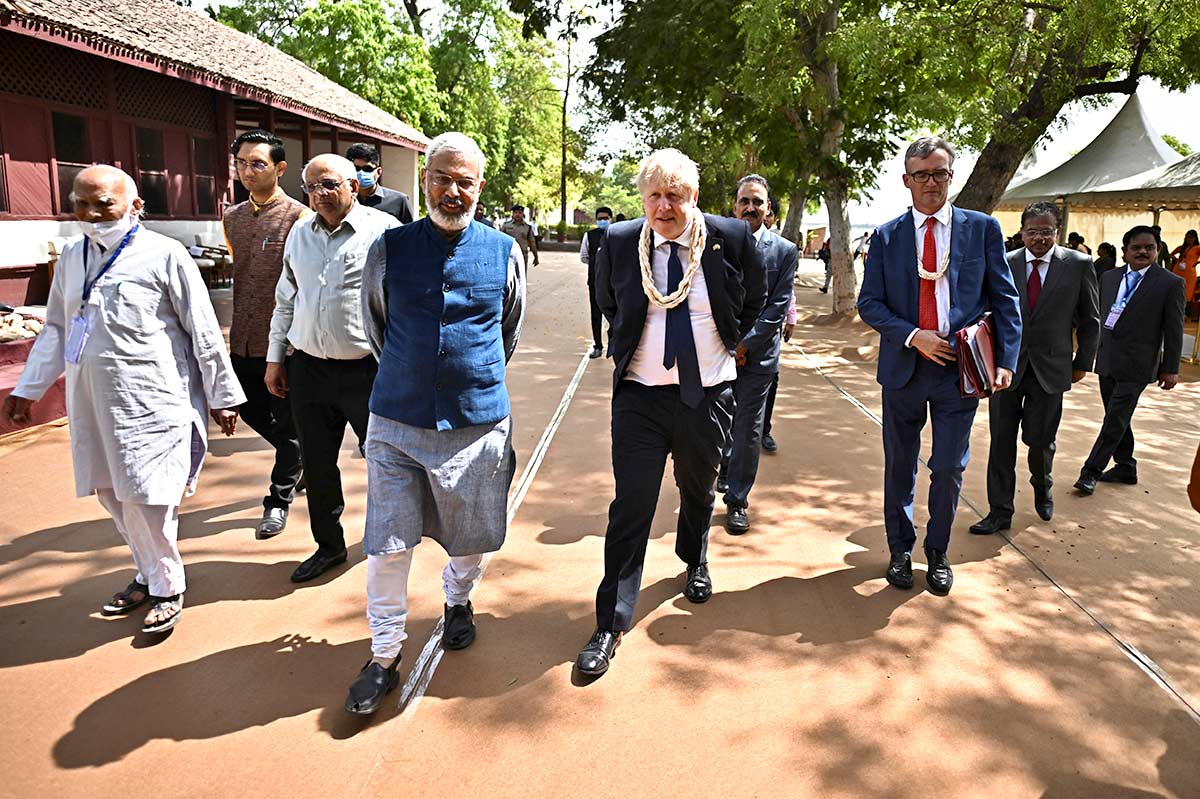 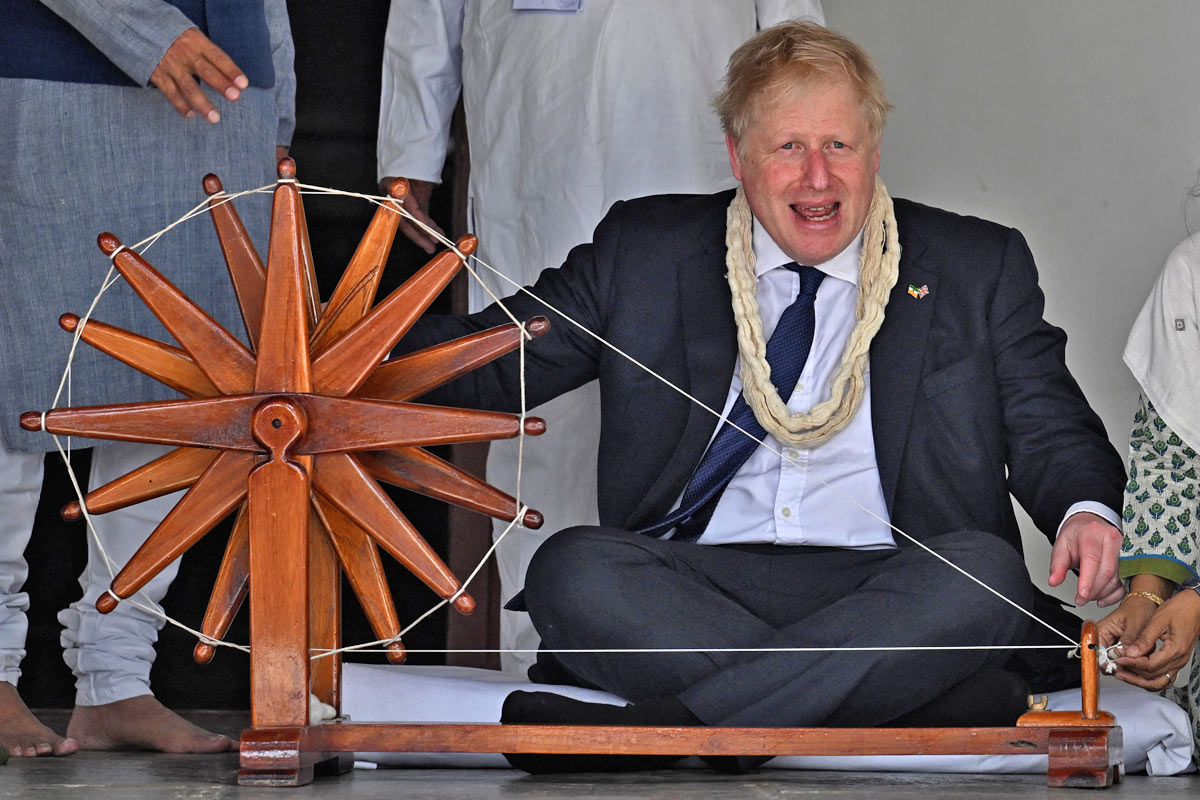 IMAGE: Boris tries his hand at spinning khadi on a charkha.
This is probably the first time a member of the British ruling establishment, pre-1947 or post-1947, has been spotted doing what the Mahatma did almost daily.
By the way, Johnson's idol Winston Churchill -- he has written a book on Britain's wartime prime minister -- detested the Mahatma.
Photograph: Ben Stansall/Pool/Reuters 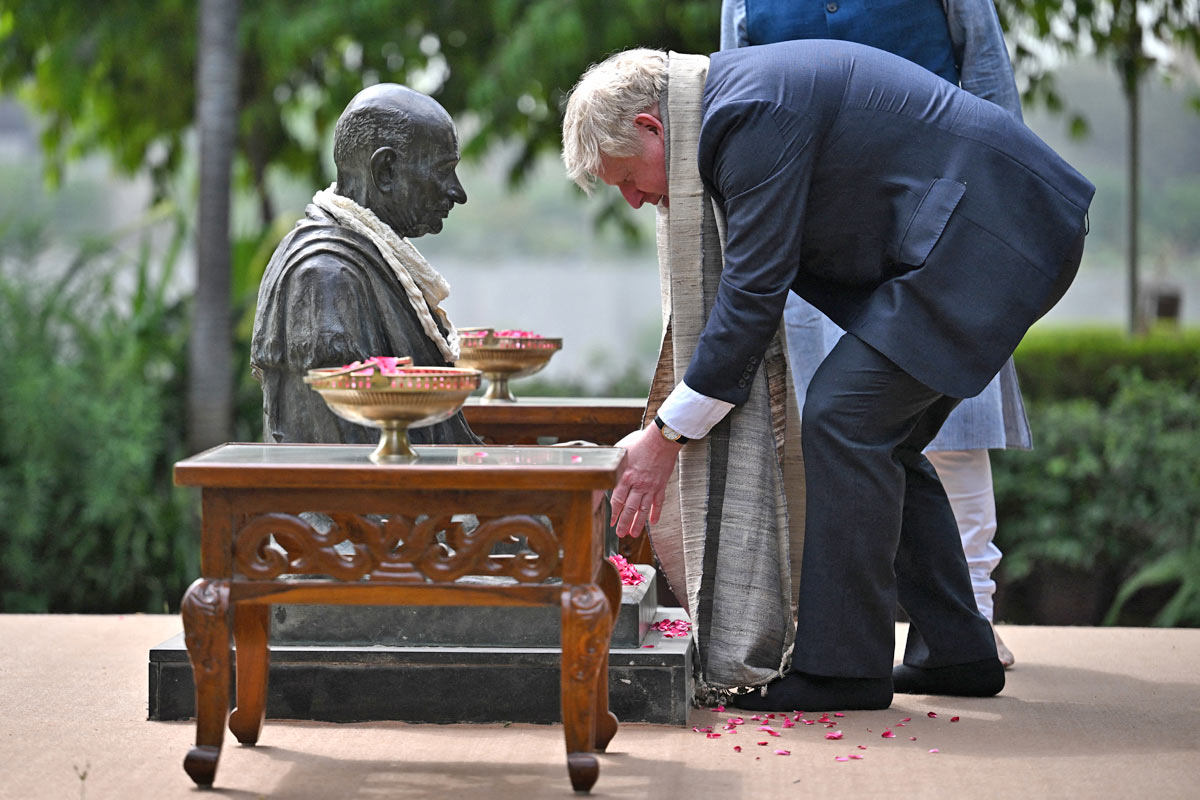 IMAGE: Boris scatters rose petals on a statue of Gandhiji.
Churchill, who called the Mahatma a 'malignant subversive fanatic', must be turning in his grave.
Photograph: Ben Stansall/Pool/Reuters 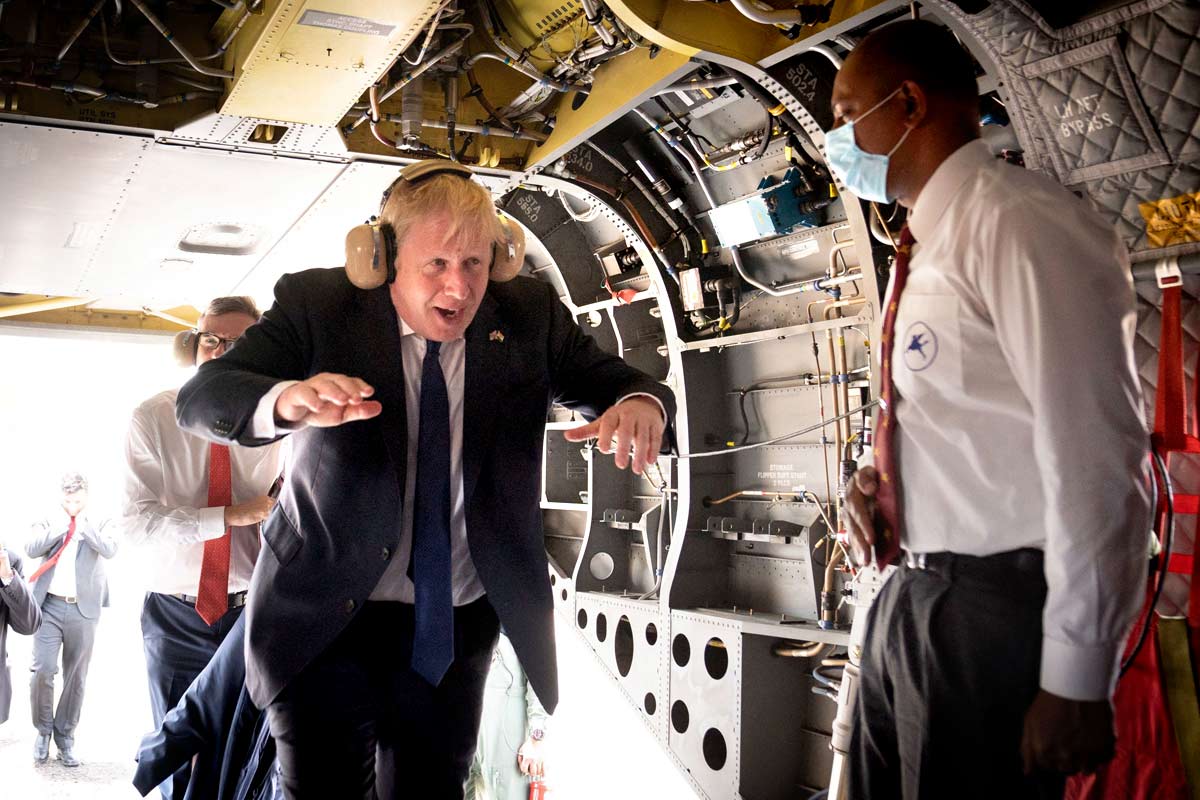 IMAGE: Boris boards a Chinook helicopter for a flight to the JCB factory located in the Halol industrial area near Vadodara.=
After wrapping up his engagements in Gujarat, Boris will fly to New Delhi where he will gup-shup with the nation's currently best known Gujarati, Prime Minister Narendra Damodardas Modi, on Friday before returning to London.
Photograph: Stefan Rousseau/Pool/Reuters 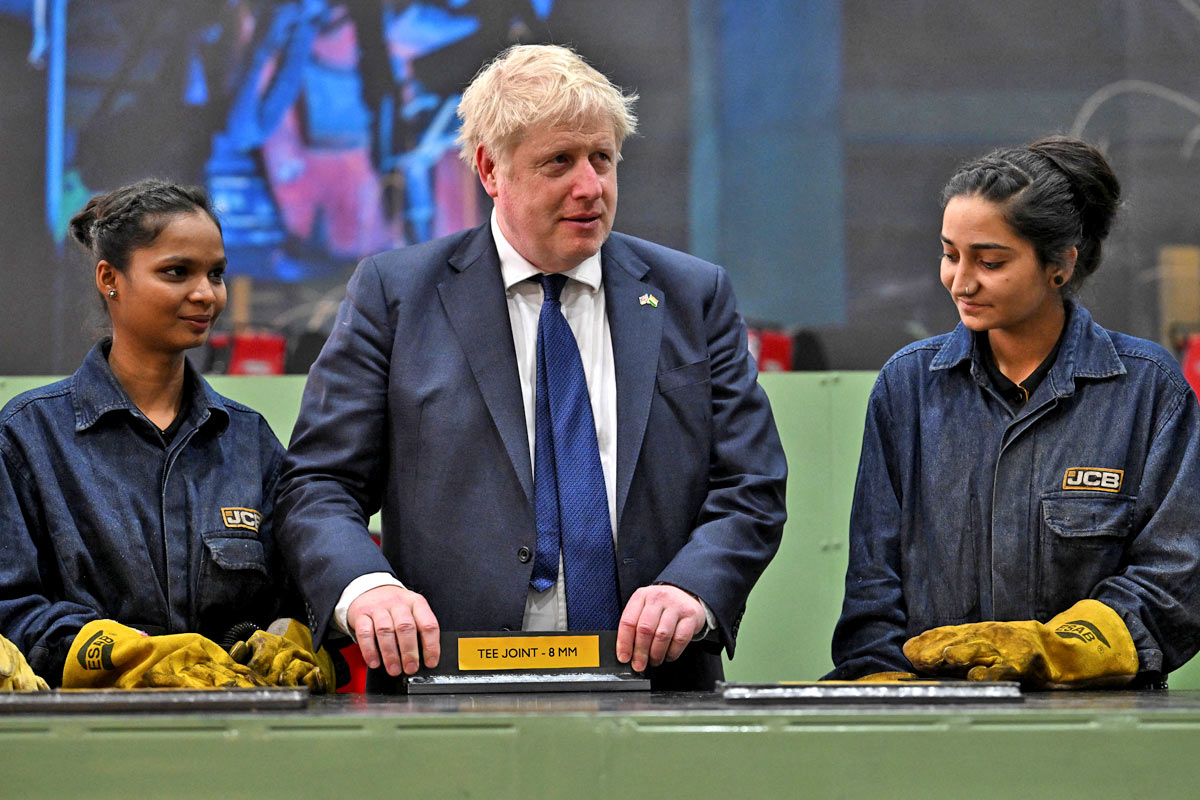 IMAGE: Surprisingly, Boris is in India on a day when Queen Elizabeth II is celebrating her 96th birthday.
No surprises though that Boris called on Gautam Adani at the Adani Group's global headquarters on the outskirts of Ahmedabad.
'Honoured to host @BorisJohnson, the first UK PM to visit Gujarat, at Adani HQ. Delighted to support climate & sustainability agenda with focus on renewables, green H2 & new energy.'
'Will also work with UK companies to co-create defence & aerospace technologies. #AtmanirbharBharat,' Adani tweeted afterwards.
Photograph: Ben Stansall/Pool/Reuters 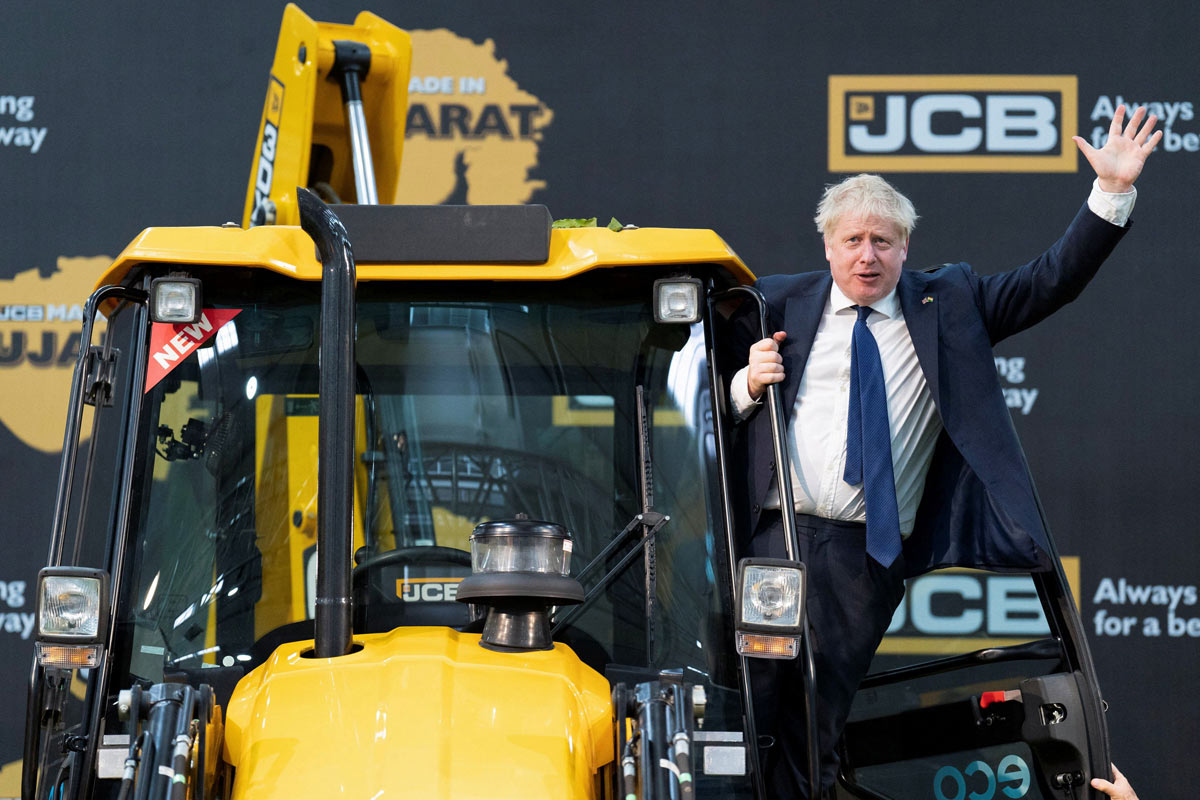 IMAGE: Boris's troubles are not behind him yet.
The Associated Press reported on Thursday that 'British lawmakers looked likely to order an investigation into Prime Minister Boris Johnson for allegedly lying about whether he broke coronavirus restrictions by attending illegal gatherings during the pandemic.'
'The opposition Labour Party has called a House of Commons vote that, if passed, would trigger a watchdog committee probe of Johnson for allegedly misleading Parliament. Ministers found to have knowingly misled Parliament are generally expected to resign,' AP reported.
Photograph: Stefan Rousseau/Pool/Reuters 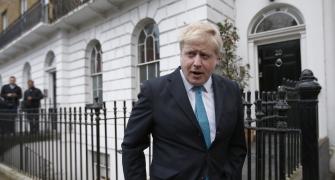 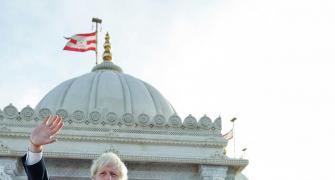 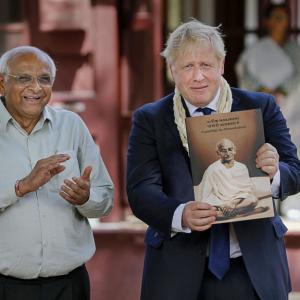