News
Business
Movies
Sports
Cricket
Get Ahead
Money Tips
Shopping
Sign in  |  Create a Rediffmail account
Rediff.com  » News » 'What a fall for you to lie': Prashant Kishor hits back at Nitish

'What a fall for you to lie': Prashant Kishor hits back at Nitish

Election strategist-turned-politician Prashant Kishor on Tuesday revolted against Bihar chief minister Nitish Kumar, charging him with having "lied" about his induction into the party and questioning if it was tantamount to admitting capitulation before the Bharatiya Janata Party.

In his first direct attack on the Janata Dal-United national president, Kishor, who joined the party in September 2018 and was elevated to the rank of its national vice-president just weeks later, lashed out at Kumar for saying that he was inducted into the party at the instance of Union home minister and the then BJP chief Amit Shah.

Kumar had made the comment earlier in the day in response to queries by scribes about the attack by Kishor on Twitter against Shah and its possible impact on the JD-U's alliance with the BJP as also his working for Arvind Kejriwal's Aam Aadmi Party in Delhi where the National Democratic Alliance partners are contesting the February 8 assembly polls together.

"@NitishKumar what a fall for you to lie about how and why you made me join JDU!! Poor attempt on your part to try and make my colour same as yours! And if you are telling the truth who would believe that you still have courage not to listen to someone recommended by @AmitShah?," he wrote on microblogging site Twitter.

Kishor has been rankling the BJP for quite some time, questioning his own party's decision to support the Citizenship (Amendment) Bill in Parliament and insisting that the JD-U contest a significantly higher number of seats than the saffron party in the assembly polls in Bihar due later this year.

There was no immediate reaction from leaders of the JD-U, who were stunned by Kishor's action.

The development, however, is an indication that Kishor may have burnt his bridges as Kumar is a stickler for party discipline and does not brook any dissent.

Talking to reporters earlier in the day after a meeting of JD-U workers in Bihar, Kumar refused to be drawn into the controversy over Kishor engaging in a "Twitter war" with top BJP leaders, including Union home minister Amit Shah.

"He remains in touch in his professional capacity. I have learnt through newspapers that he is working for the Aam Aadmi Party. But he remains in touch with so many people. I inducted him into my party upon Shah's recommendation," Kumar claimed.

"I will be happy if he remains in the party. I would be okay if he chooses otherwise. But if he has to stay he must do so respecting the party's structure," Kumar said replying cryptically to further queries. 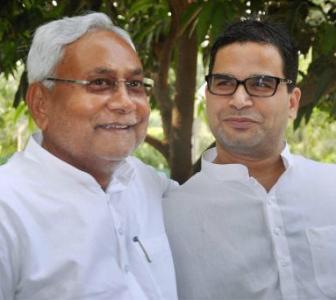