Ignoring China's objections, West Bengal Governor M K Narayanan on Thursday attended a programme addressed by the Dalai Lama who was dismissive of Beijing's opposition to him, saying it was "quite routine".

Chief Minister Mamata Banerjee, who was scheduled to attend the event on Mother Teresa, could not do so as her mother was unwell but deputed Trinamool Congress member of Parliament Derek O' Brien for it.

Brien said, "That is the only reason that Banerjee is not here. She would have been here 200 per cent. But her mother is not well".

In an unusual move, the Chinese consulate here had written to the state government asking it to ensure that the CM and Governor did not attend the programme.

India had refused to accede to China's insistence that the Tibetan spiritual leader should not be allowed to attend a Buddhist congregation in Delhi, leading to last minute postponement of the border talks which were to be held last Monday.

The Dalai Lama had addressed the Delhi meet on Wednesday but made no political comments. Asked by reporters about Chinese objections, he said these were quite routine as Beijing considered him a "demon" even though he is now "semi-retired".

"This is quite routine. From their point of view it is also logical. Some Chinese officials consider me as a demon. They raise every objection," he said.

Asked if he expected this kind of reaction from the Chinese government, the Dalai Lama quipped, "I have faced this before. I don't want to comment on the letter from the Chinese consulate."

"This year in March I formally, officially handed over the political leadership. I am no longer a leader of political administration. So, I don't like to politicise my visit here," he remarked.

While China treats the Tibetan spiritual leader as persona non grata, New Delhi has maintained that he is a respectable religious leader and in a democratic country there is no restriction on freedom of speech.
Source: PTI© Copyright 2020 PTI. All rights reserved. Republication or redistribution of PTI content, including by framing or similar means, is expressly prohibited without the prior written consent.
Related News: Dalai Lama, K Narayanan, Mamata Banerjee, China, Parliament Derek O
SHARE THIS STORY
Print this article
Why is Mamata silent on 'corrupt' UPA, wonders Gadkari
Dalai Lama attends Buddhist meet, calls off press conference
By-election polls passes off peacefully in Haryana, K'taka, Benga 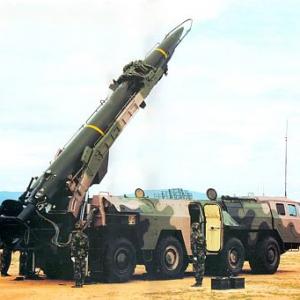 SHOCKING: China may have 3,000 N-Warheads

VIEW:: How Parliament can function without disruptions