News
Business
Movies
Sports
Cricket
Get Ahead
Money Tips
Shopping
Sign in  |  Create a Rediffmail account
Rediff.com  » News » We will do what we said, says China as Pelosi flies out of Taiwan

We will do what we said, says China as Pelosi flies out of Taiwan

China on Wednesday said it will take "strong and effective" countermeasures against the US and Taiwan for violating the "One-China policy", as the US House of Representatives Speaker Nancy Pelosi successfully completed her visit to Taipei disregarding Beijing's vociferous threats. "We will do what we have said. Please have some patience," foreign ministry spokesman Hua Chunying told a media briefing in Beijing while responding to questions on what more actions China could take in addition to lodging diplomatic protests with the US, conducting live fire drills around the Taiwan island and banning some food imports from Taipei.

China views Taiwan as a breakaway province which will one day unite with it. Beijing has not ruled out the possible use of force to reunify the self-ruled island with the mainland.

"We will do what we say. These measures will be strong, effective and resolute,” Hua, who is also the assistant Chinese foreign minister, said to question whether China plans to impose sanctions against Pelosi as well as Taiwan leaders like President Tsai Ing-wen.

Pelosi's successful visit to Taiwan, which China claims as part of its mainland, has left questions about the efficacy of Beijing's high-voltage rhetoric ahead of her visit as it added more pressure to act after she left the island.

Pelosi arrived on Tuesday night by a US Air Force jet to Taipei amid intense speculation about adverse actions by Beijing. The visit of Pelosi, who is the third highest official, is the first by a top US leader to Taiwan in 25 years.

The 82-year-old top Democratic Party leader left Taipei on Wednesday amid the glare of international publicity and leaving a trail of anger and bitterness in China.

Observers say her successful visit to Taiwan has put pressure on Beijing as it dented the strong man image of President Xi Jinping, who in the next few months was expected to be endorsed for an unprecedented third term to continue in power for another five years or perhaps for life by the once-in-a-five-year Congress of the ruling Communist Party of China (CPC).

Hua defended the live firing drills by the Chinese military around Taiwan as well as the deployment of fighter jets in the Taiwan Straits during Pelosi's visit, saying China was compelled to act in self-defence after her visit which has violated China's sovereignty and territorial integrity.

The root cause of the tensions is that the Taiwan authorities have been using the strength of the US to seek Taiwan's independence, Hua said.

About criticism by some that China has failed to prevent Pelosi from visiting Taiwan, Hua said the US politicians are putting up a ”political stunt” for their personal gains.

As for the specific countermeasures China will be taking, the Chinese side is deeply committed to upholding its sovereignty, territorial integrity and security interests, Hua said.

"We are determined to do that, there should be no questions about that. Our countermeasures will be strong, effective and resolute,” she said.

Noting that the US side shall "pay the price" for its "mistakes" for going ahead with the visit disregarding stern warnings from Beijing, Xie urged the US to immediately address its wrongdoings, take practical measures to undo the adverse effects caused by Pelosi's visit to Taiwan, State-run Xinhua news agency reported.

The US must not go further down the wrong path, escalating tensions and making the situation across the Taiwan Strait and China-US relations irreparable, Xie said.

He added that the US should stop playing the "Taiwan card", stop using Taiwan to contain China in any form, and stop interfering in China's internal affairs.

Stating that Pelosi risks universal condemnation for deliberately provoking and playing with fire, Xie said this is a serious violation of the one-China principle and the three China-US joint communique.

"The move is extremely egregious in nature and the consequences are extremely serious. China will not sit idly by," Xie said.

Military experts said the PLA could send drones over Taiwan and conduct regular drills in the coming weeks to vent its anger over Pelosi's visit.

Fu Qianshao, a retired equipment expert from the PLA Air Force, said that given their proximity to Taiwan, the large-scale drills would be a blockade of the island and marked a breakthrough in Beijing's military actions against the island in terms of location and intensity.

He told the Post that the PLA would also respond to any possible move by the US and Taiwanese air forces in those areas, with Thursday's drills showing for the first time that Beijing did not recognise Taiwan's territorial waters. 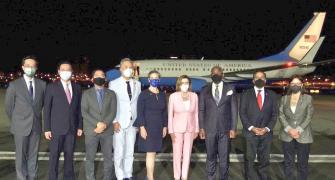 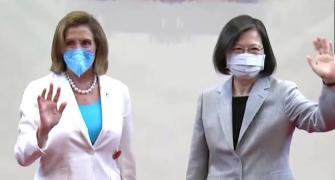 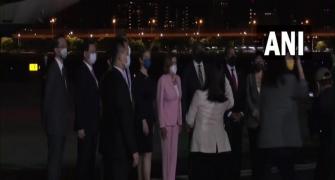 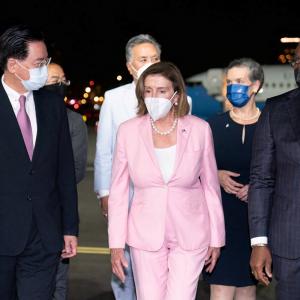