We don't expect a patch up, says Alagiri

In a further jolt to the fragile ties between the Congress and the Dravida Munnetra Kazhagam, Union minister for Chemicals and DMK leader MK Alagiri has said that, " We (DMK) have no expectations of a patch-up with the Congress. The split will not affect our poll results."

Alagairi's comments came a day after the DMK said that its members in the Union Cabinet would submit their resignations by Monday.

Alagiri also said that he was 'very happy with the DMK leaving the United Progressive Alliance."

The union minister went on to say that that "The Congress is no competition to us. We will not have a problem because of the Congress not supporting us."

Alagiri has been known to harbour ambitions of taking over as CM from his father. His step-brother MK Stalin is currently deputy CM of Tamil Nadu.

The recent 2G scam has strained ties between the parties. The Central Bureau of Investigation has also indicated that it might question Tamil Nadu Chief Minister M Karunanidhi's daughter Kanhimozhi in connection with the 2G scam.  The Congress had demanded 63 seats and a power sharing agreement in Tamil Nadu where the DMK has been in power for the last two terms with Congress support. 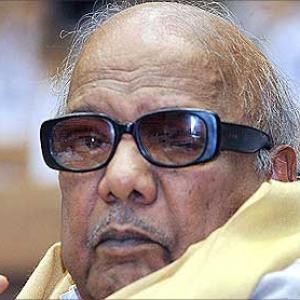