News
Business
Movies
Sports
Cricket
Get Ahead
Money Tips
Shopping
Sign in  |  Create a Rediffmail account
Rediff.com  » News » 'We could not take our eyes off Rahul Gandhi'

Source: PTI
February 05, 2010 15:46 IST
Congress General Secretary Rahul Gandhi on Friday called upon the youth of Mumbai to focus on the inclusive development of India and stay away from divisive politics.

"If you want to make a change, join politics and the Congress party. Some people are trying to divert your attention from real issues, but you have to stay focused," he said while addressing nearly 1,100 college students at Bhaidas Hall in suburban Ville Parle in Mumbai on Friday.

"The Congress stands for a united India. There are two kinds of leaders in the country, one who divide and rule and the other who collaborate and take everyone along towards the objective of a united India and move forward," he said in an obvious reference to the Shiv Sena and the Maharashtra Navnirman Sena.

"There are some people here who are trying to divide you on communal and linguistic basis and the Congress is against them," Gandhi said.

Yash Panchal from N N College, who attended the meeting, said that the hour-long deliberations with the Congress leader was a good experience.

"Where should I say I belong to? I know one thing --  I am an Indian and I belong to India," he added.

Rahul also interacted with the students on the process of enrolment in the Youth Congress. When a student asked him why he had joined politics, the Gandhi scion said he was 'irritated' with the present political system and wanted to change it. Dhawal Kantawal, a second year MBA student, said Rahul began his interactions by saying that he had come there to have fun with them.

"Then he asked us how many students were from families with political backgrounds," Dhawal said.

When some students raised their hands, he asked how many students were aware of the process of joining politics, to which one of them replied that it was through family connections.

Rahul replied that he wanted to deal with those who did not have any political family background and get them inducted into politics.

Prabdeep Singh, a student hailing from Chandigarh, said even though all the students found Rahul to be a genuine person, they were cynical in their judgment about politicians.

"We do not know whether the Youth Congress is a well-oiled machinery which can translate Rahul's vision into reality," Singh said. However, the student expressed his desire to join Youth Congress.

Incidentally, all the girls found Rahul to be a very good-looking person, according to Nidhi Bang. "We could not take our eyes off him," she said.

Nidhi said she, too, was planning to join the Youth Congress. Dhawal said even though he was a Bharatiya Janata Party supporter, he found the Congress general secretary very impressive.

However, some students felt that Rahul's visit was a marketing exercise for the Youth Congress' membership drive and he was unwilling to discuss other issues, though he answered questions regarding preparations for the Commonwealth Games and the state of India's education system. 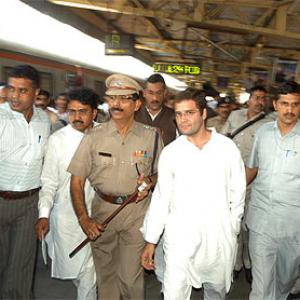