The MP, wearing a blood-soaked shirt and a bandage on head, said that Verma led a police contingent which attacked a "peaceful" protest by the BJP over the capture of its party office at Shyamnagar.

A senior police officer, however, claimed that stones were being hurled during a clash between two groups at Kankinara and Singh suffered injuries in the melee.

Local sources said that a mob that had blocked a road started pelting stones at the police officers, as soon as they arrived at the spot.

The force retaliated and baton charged the gathering to clear the road.

Both Shyamnagar and Kankinara come under the Barrackpore Lok Sabha constituency, of which Singh is the MP.

Several areas, including Bhatpara and Kankinara, in the constituency have been in the grip of violence since Singh won the election on a BJP ticket, having deserted the ruling Trinamool Congress, of which he was an MLA.

Fresh clashes broke out between the supporters of the two parties on Sunday over control of a party office at Shyamnagar, they said.

Earlier in the day, Singh's vehicle was vandalized near Shyamnagar railway station.

"The matter has been reported to the police and an investigation is underway," he said.

The parliamentarian claimed that the TMC supporters attacked and damaged his car.

He also said that the ruling party was using force to capture BJP party offices at various places in Barrackpore constituency, a charge denied by the Trinamool Congress.

West Bengal food and supplies minister Jyotipriya Mallick asserted that it was the saffron party which had forcibly taken over the TMC's party offices in Barrackpore.

"Arjun Singh should remember what his people had done to take over our party offices. Even chief minister Mamata Banerjee had caught the BJP workers red-handed while they painting a TMC office in saffron colour," he added. 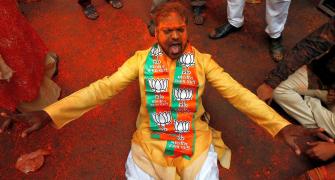