With voting on FDI in retail becoming a crucial issue in Parliament, BJP and Congress are leaving no stone unturned to muster their numbers and issued three-line whips to their MPs.

As the Lok Sabha takes up the discussion on Tuesday under a rule that entails voting, both the major parties have asked their members to be present in the House and vote according to their party diktat.

While Congress is making all out efforts to bring its constituents and outside supports on board, the entire BJP-led NDA is united in opposing the FDI decision. The Left parties, AIADMK, BJD, AGP and some other parties are also against the decision.

Left leaders are confident that their MPs will turn out in full numbers following the decision taken by all the four parties to oppose the FDI move.

Leader of Opposition in Lok Sabha Sushma Swaraj is likely to initiate the debate on the issue on BJP's behalf while her Rajya Sabha counterpart Arun Jaitley will lead the party in the Upper House.

BJP Parliamentary Party will discuss the strategy to be adopted in both Houses at its meeting on Tuesday morning before the session begins.

Meanwhile, Congress floor leaders have called MPs from Telangana region in Andhra Pradesh, including Union ministers, for consultations amid apprehension that they could make the disappearing trick during the crucial vote.

The meeting has been called by Home Minister and Leader of Lok Sabha Sushilkumar Shinde and Parliamentary Affairs Minister Kamal Nath in the wake of Andhra Pradesh MP's Forum convenor Ponnam Prabhakar voicing the possibility of some of the MPs staying away from the vote.

At present, the government enjoys the support of around 265 MPs, including 18 of DMK, in the 545-member Lok Sabha. With the support of Samajwadi Party (22) and BSP (21), the backing for the ruling coalition goes a little over 300, against the half-way mark of 273.

UPA does not have the numbers on its own in the Upper House, which has an effective strength of 244. UPA and its allies have a strength of 94 members. The 10 nominated members may go ahead to vote with the government. Among the seven Independents, three or four may support the government.

Still, the ruling coalition may have to persuade outside supporters BSP (15) and SP (9) to vote with the government. 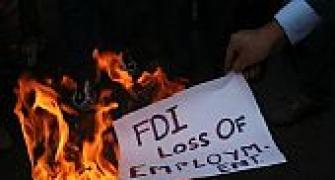 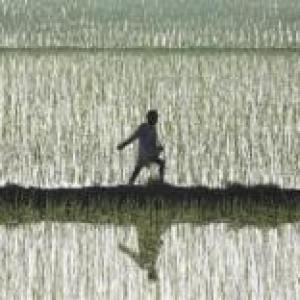 Land bill finalised, to go to Cabinet for approval