My visit to Dalit houses were only highlighted: Rahul

Congress general secretary Rahul Gandhi said that only his visits to Dalit houses across the country were highlighted although he went to places inhabited by people of all the classes.

"The media talks only about my visits to the houses of Dalits and chooses to ignore the other places where I go," he told reporters on Monday at a press conference in Bhopal. The young leader arrived in Gwalior yesterday on a two-day visit to the state to spread base of Youth Congress and the students wing National Students Union of India.

The Congress general secretary said that nothing should be sought to be found out in his visits to houses of poor in the country. "I had gone to four colleges and a tribal hostel but the media highlighted only my visit to the hostel," the Gandhi scion said.

In Bhopal, Rahul was impressed by the optimism shown by students living in a tribal hostel, where he made an unannounced and unscheduled visit. "I thought that if such poor students can be full of optimism then there is not doubt that the future of India will be bright," Rahul said.He told reporters that the students were full of optimism even though the parents of most of them were simple labourers. 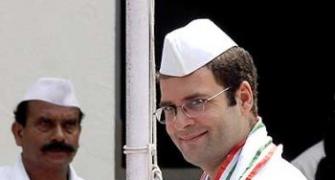 Rahul Gandhi kicks off 'Mission UP 2012'

The lessons not learnt from Bhopal