Haryana remained on the boil on as the Jat stir unleashed fresh incidents of violence and arson in which a railway station, a police station and some buildings were set ablaze even as the Army had to use choppers to reach parts of blocked Rohtak district. 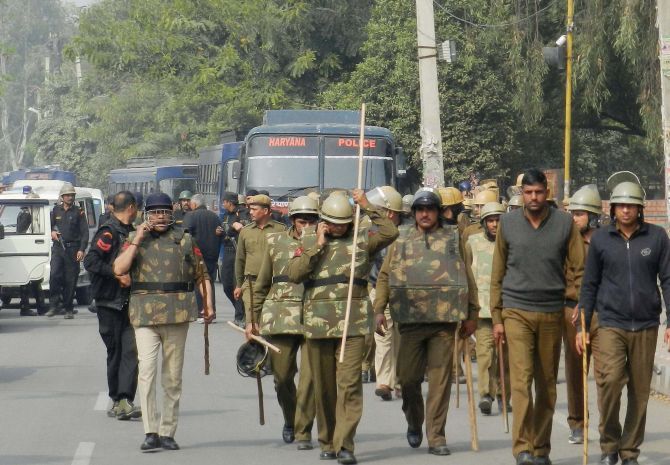 The army took out a flag march in Rohtak. Photograph: PTI

Curfew was clamped in three more towns -- Sonipat, Gohana (Sonipat) and Jhajjar -- on Saturday as sporadic incidents of arson continued during the night and later in the day in addition to Rohtak and Bhiwani districts where it is already in place and shoot-at-sight orders issued on Friday.

Flag marches were conducted by Army in Rohtak and Bhiwani districts.

Road and Railway traffic continued to be affected in the state due to blockades resulting in disruption of services from Delhi and beyond to Haryana, Punjab, Himachal Pradesh, Jammu and Kashmir and Chandigarh through various National Highways, including NH 44 (Delhi Ambala) and NH 10 (Delhi-Hissar- Fazilka). Several trains were cancelled by Railway authorities.

Police said some persons had pelted stones at the Jhajjar residence of Haryana Minister O P Dhankar, but no one was injured in the incident.

As the violence by Jat protestors demanding quota continued unabated, Chief Minister Manohar Khattar issued a fresh appeal to the people to maintain peace and law and order, saying government would find a solution to the problem.

"Such incidents create disharmony," he said in Chandigarh after reviewing the situation with his ministerial colleagues and senior civil and police officers.

Appealing to protestors to end their protest, Khattar said that nothing will be gained by destroying public property, as more central forces were rushed to the state.

Normal life remained disrupted in large parts of the state with shops and commercial establishments besides schools remaining closed, mobile internet services being suspended in many districts, and transportation of essential commodities, including LPG, milk and vegetables, also being adversely affected.

Protesters have also blocked NH-44 near Nangal village in Sonipat district and near Panipat affecting movement of traffic, which connects Punjab, HP, Chandigarh and J&K.

Petrol pumps in various areas have gone dry as fresh supplies are not being received.

In Meham. a police Station and some adjoining buildings were torched by the protestors.

Despite fresh incidents of violence being reported, State Police chief Yashpal Singhal claimed that the situation had improved since yesterday. He said that one person was killed in an incident of violence at Rohtak yesterday.

Prohibitory orders under section 144 CrPC banning assembly of five or more persons and taking out of processions have been clamped in more districts including Panipat, Hissar, Jhajjar, Jind and Kaithal.

Army personnel could not enter Rohtak through road as protesters had put up blockades on Delhi, Hissar, Rohtak, and Fazilka highways, forcing the authorities to airdrop them from helicopters, an official said.

In other incidents of arson and violence, vehicles were set on fire at Safidon (Jind) and a government office building set ablaze in Beri in Rohtak district.

A private college was vandalized in Bhiwani and the private security guard beaten up, police said, adding that an Ayurvedic dispensary was also set on fire.

A government vehicle was set on fire in Jhajjar district, a police Station in Uchana (Jind) vandalized by a mob, a motor cycle and two buses set ablaze in Kalayat (Kaithal) in Gohana (Jind) respectively.

A convoy of army, moving towards Rohtak from Hissar, was stranded near Madankheri subdivision late last night for an hour as protesting Jats had "dug up" a stretch of road as part of their pro-quota agitation. Army personnel then repaired the road and moved on towards their destination.

Normal life was crippled in Rohtak, the epicentre of the ongoing agitation, and Bhiwani in the wake of violence which broke out yesterday during the stir, and many other parts of the state with rail and road traffic hit, and shops and commercial establishment and schools remaining closed.

Sporadic incidents of violence and arson were reported at several places overnight despite authorities imposing curfew.

Haryana government had yesterday called the Army in nine districts while curfew was imposed in two districts along with shoot-at-sight orders after one person died and several others were injured during the Jat stir which turned violent with mobs resorting to widespread arson.

The Centre has also rushed 3,300 personnel of paramilitary forces to control the rampaging mob.

Agitating Jats squatted on the rail tracks in Gurgaon district on Saturday, affecting movement of trains.

A Jat protester in Gurgaon said community members want a "written assurance from the government this time. We cannot be befooled with hollow promises every time".

He said Jats did not believe in violence and it was "anti-social" elements who were indulging in such acts to defame the community and to derail their agitation.

Governor Kaptan Singh Solanki had to cancel his function in Gurgaon on Saturday, where he was to address a group of women, with an official saying the decision was taken in view of the situation prevailing in the state.

Chief Minister Manohar Lal Khattar earlier in the day made an appeal to the people to maintain peace and harmony.

"I appeal to all my fellow Haryanvis to maintain law & order in the State, and ensure that harmony is maintained in society," he tweeted.

Khattar had recently held talks with Jat and Khap leaders in Chandigarh, but these failed to bear fruit as the protesters remained adamant on their main demand of OBC quota in government jobs and rejected his announcement of enhancement of the quota of reservation for Economically Backward Classes in the state from 10 to 20 per cent.