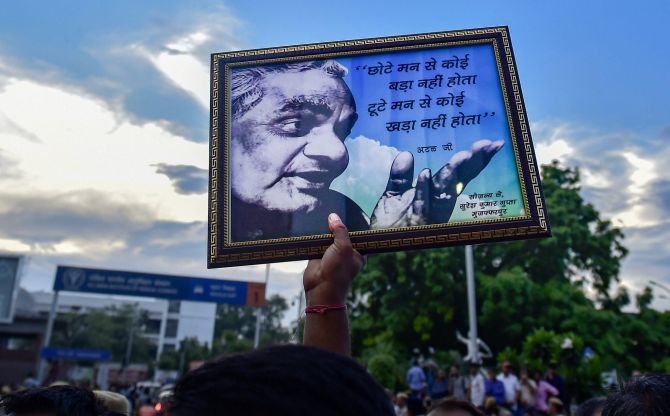 Several roads in the national capital will be closed for the public on Friday in view of former prime minister Atal Bihari Vajpayee's funeral, the Delhi Traffic Police said on Thursday.

Vajpayee's last rites will be performed at the Rashtriya Smriti Sthal in New Delhi at 4 pm on Friday.

Those travelling between east and west Delhi can use Vikas Marg, Shahdara Bridge and Wazirabad Bridge to reach Ring Road.

The body of the Bharatiya Janata Party veteran is kept at his official residence at 6A, Krishna Menon Marg.

BJP chief Amit Shah said people can pay their homage to the departed leader at his residence from 7.30 am to 8.30 am on Friday.

The body would then be taken to the BJP headquarters at Deen Dayal Upadhyay Marg at around 9 am, he told reporters outside the late leader's residence.

The funeral procession would leave the BJP headquarters at 1 pm and the last rites would be performed at 4 pm, Shah said.

Meanwhile, all government offices and educational institutes in Noida will remain closed on Friday, officials said.

As a mark of respect to the departed leader, the Yogi Adityanath government in Uttar Pradesh has announced a state holiday on Friday.